Accessibility links
New Evidence Shows HIV's Spread Got Earlier Start The recent discovery of a well-preserved tissue sample from a woman living in the Congo in 1960 allowed scientists to analyze an early version of the HIV genome. Their findings indicate that HIV arrived in the region much earlier than previously thought, around 100 years ago. 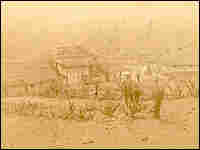 This photo shows Kinshasa circa 1883-85. The growth of the Congolese capital and other cities in the region may have been crucial to the emergence of HIV/AIDS. Courtesy of the Royal Museum for Central Africa hide caption

toggle caption
Courtesy of the Royal Museum for Central Africa 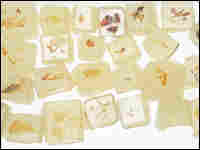 These paraffin blocks contain body-tissue samples from between 1958 and 1962 in Kinshasa. Among them is the lymph node tissue removed from a 28-year-old woman that helped scientists analyze the HIV genome. Dirk Teuwen hide caption 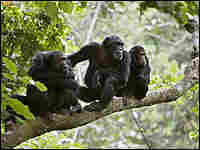 Dr. Michael Worobey says the viruses most likely came from when people got scratched or cut while hunting and butchering primates. istockphoto.com hide caption

A lucky find has changed scientists' understanding of how HIV got started on its deadly march to nearly every corner of the planet.

The new evidence lay in a box in a musty storage room at the University of Kinshasa in the Democratic Republic of the Congo. "It looked like it had been gathering dust since the 1960s," says Dr. Michael Worobey of the University of Arizona, an author of a new report on the origins of HIV in the Oct. 2 issue of the British journal Nature.

Inside the box were paraffin blocks containing lymph node tissue removed from a 28-year-old woman living in Kinshasa in 1960 — the year Belgium relinquished its control over the Congo.

Analysis of the woman's tissue with 21st-century technology revealed she was infected with HIV. The researchers don't know why she had the biopsy.

The only earlier documented HIV infection comes from a Bantu man living in Kinshasa in 1959.

Worobey says the newly discovered tissue sample contained only "frustratingly small bits and pieces" of HIV. Altogether they made up only one-hundredth of the virus's genetic material. But by amplifying these fragments, the group was able to piece together the viral genome — and compare it to the 1959 sample.

The researchers found the two HIV samples differed genetically by 12 percent. That's important. It means that by 1960, HIV had evolved enough that there were at least two subtypes circulating in the colonial town.

Scientists know that HIV mutates at a fairly constant rate. So they were able to calculate how long it would have taken for the virus to evolve to this point — about 50 years. That means HIV first arrived in Kinshasa — then called Leopoldville after a 19th-century Belgian king — around the turn of the century. Until this week's discovery, AIDS researchers figured HIV's spread among humans didn't really start until the 1930s.

The revised timetable for HIV's spread is significant. Two years ago, scientists pinned the ancestor of HIV to a remote corner of the West African rainforest in southeastern Cameroon, on a tributary of the Congo River 500 miles upstream from Leopoldville/Kinshasa. Scientists think this ancestral line of viruses had probably been circulating among nonhuman primates for decades or even centuries.

Worobey says the viruses infecting monkeys and apes probably crossed over into humans sporadically for a long time, most likely when people got scratched or cut while hunting and butchering monkeys and chimps. That enabled the virus to adapt to humans. But those ancient infections never spread. Because human population density was so low in the jungle, the viral sparks never ignited an epidemic among people.

Not, at least, until one of these cross-species transmissions infected someone who carried the virus downriver to the new trading post of Leopoldville.

"Why did the pandemic start in Leopoldville? Why did the AIDS pandemic not occur until the 20th century?" write scientists Paul Sharp and Beatrice Hahn in an accompanying commentary. "The answer may be that, for an AIDS epidemic to get kick-started, HIV-1 needs to be seeded in a large population center."

"Once it started there," Worobey says, "the story of HIV paralleled the story of Kinshasa." The city's population grew slowly in the early part of the century. Then, it exploded beginning around 1940 to its current population of 7 million. As the population grew, so did the HIV epidemic. It went undetected because, for one thing, people often died young from tuberculosis, malaria and other diseases. So it wasn't obvious that some people were dying of a new disease we now know as AIDS.

Meanwhile, as the new evidence shows, HIV was quietly mutating into the genetic subtypes that scientists only now can document.

"The rest of the story is this virus emerging from that hub and igniting epidemics around the world," Worobey says. "By 1981 we were observing the first results." That's when the first cases of AIDS were diagnosed among gay men in America.

A year ago, Worobey documented a "signature of HIV migration" from the Congo to Haiti. The virus was carried there, he thinks, by French-speaking teachers and other professionals who had gone to work in the early post-colonial economy. Some criticize this conclusion, but the Arizona scientist says the evidence is "robust."

The moral of the story, he says, is that humans "changed the landscape for this virus," by building cities and transportation routes that gave HIV its opportunity to become pandemic. But that also means, he says, that humans have it in their power to change the landscape in ways to foil the virus.

What it would take, he says, is a change in behavior, through education and strategies such as sexual fidelity, condom use and circumcision, so that each HIV-infected person infects, on average, fewer than one other person. When that happens, Worobey says, the pandemic will die away.