Accessibility links
Fired Muslims To Sue Over Prayer Break Dispute Last month, more than 100 Somalis were fired for walking off the job at a meatpacking plant in Greeley, Colo. They were protesting the company for not allowing breaks to pray at sunset during Ramadan. Now they are in the first stages of filing a class-action lawsuit. 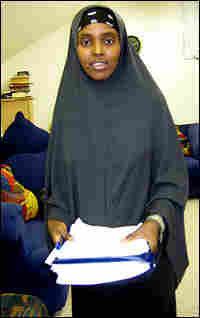 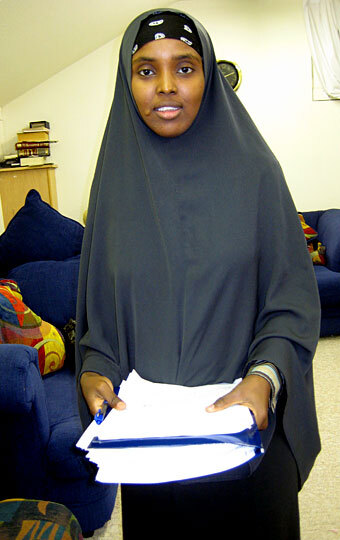 Meatpacking is traditionally one of the first avenues of employment for new immigrants to the United States.

For many years, that has meant mostly Hispanic laborers. But as recent immigration raids have emptied plants of illegal workers, a newer group is taking their place — East African refugees.

That change is sparking some cultural and religious clashes, including one at JBS Swift & Co., a meatpacking plant in Greeley, Colo.

Last month, more than 100 Somalis were fired for walking off the job after the company refused to let them take breaks to pray at sunset during the Muslim holiday month of Ramadan. They are in the process of filing a class-action lawsuit against the company.

Somali women in bright robes and head scarves and men in skull caps trickled into the community center in Greeley in September to discuss their options after being fired.

"When everybody went on break, they said, nobody can go to break," says Farhia Abdi, a slender young woman in traditional dress, with a constantly ringing cell phone,

Abdi says the company originally agreed to move the breaks to accommodate Muslim workers. But after a few days, management changed its position.

"They closed bathrooms, they taped the water fountains," she says. "And they said, whoever was going on break to pray, they said, 'Give me your badge and get out of here; you're fired.'"

A half-dozen workers lost their jobs that day, according to Abdi. A hundred or so more were fired when they skipped work in subsequent days to protest the company's policy.

In a statement, the company says the walkout violated workers' contracts.

Abdi says the dispute is un-American.

Not An Isolated Incident

Scores of workers at a Swift plant in Nebraska were fired in September in a nearly identical dispute. But at least two other food plants have recently reached agreements with their Muslim employees over Ramadan breaks. The United Food and Commercial Workers (UFCW) union represents employees in many of these factories.

UFCW spokesman Jim Papian says his organization has seen a spike of African workers joining the union in the past 14 months. That's not enough time for their religious needs to be incorporated into workplace contracts, he says.

That seems to be at least a part of the problem in Greeley: The needs of one group versus the needs of another in the same plant floor.

Demonstrating Against The Change

Standing outside the meatpacking plant, worker Jaime Iglera says he was mad when the company first moved the evening break to accommodate his Muslim coworkers.

He wasn't alone. Many of the plant's workers demonstrated against the change.

"All the Hispanics and all the whites and all that came and did a riot and stuff, right here, the news came on and everything," Iglera says.

Workers like Iglera seem to be getting a lot of sympathy in town.

Stacey Frennel and Sandy Hunter, who were hanging out on a porch a few miles from the factory, say that the immigrants should adapt to the U.S. way of life. They say they have to work on Sundays, so they don't get to go to church.

In some cases, courts have supported Christians seeking time for prayer. But there aren't many rulings on Muslim cases yet. So if the Somali workers go to court, they could set a precedent.

Greeley's mosque is a small, unmarked building on the edge of downtown. Evening prayers echo from a loudspeaker in the women's area where Fardosa Ali has spent the afternoon, proofreading unemployment forms filled out by fired workers.

Ali has been suspended from the plant. She says when a supervisor told her she could be fired for praying, it was an easy choice.

"He told me, if you pray, we're going to fire you today," Ali says, whose union is filing grievances for the fired workers. "I told him, that's OK, sending me home, that's no problem. But my prayer is more important than work."