Accessibility links
Jean Grae Shows There's No Better Femcee The critically acclaimed rapper Jean Grae has released a new album, Jeanius. The rapping is remarkable for its rapidity, clarity and idiomatic cadence. The writing has a good-humored polysyllabic literacy.

The critically acclaimed rapper Jean Grae has released a new album, Jeanius. The rapping is remarkable for its rapidity, clarity and idiomatic cadence. The writing has a good-humored polysyllabic literacy.

Finally this hour, music from the rapper Jean Grae. Her latest album is called "Jeanius." She finished it in 2005, but it's only now being released. And our critic Robert Christgau says it's worth the wait.

ROBERT CHRISTGAU: Jean Grae was born Tsidi Benjamin in 1976. Her father is the great South African jazz pianist Abdullah Ibrahim, her mother the South African jazz vocalist Sathima Bea Benjamin. Though Grae was born in Cape Town, she grew up in Manhattan in locations from Harlem to the Chelsea Hotel. She attended the "Fame" high school, LaGuardia. She danced as a young teen with Alvin Ailey. She was briefly a music business major in NYU, and by age 20, she bet all her cultural advantages on hip-hop.

Ms. JEAN GRAE (Rapper): (Rapping) The dream-shattering girl without collateral urls, unimaginable, shattered like a lateral curls, tight, expanding your world, and I'm like could this fight this game like a roof for your volleyball move like in the aim to get analogies right ya dumb as Mallory right but Jean is smarter than you thought at first apparently right, please don't be mad at me, I'd rather be liked 'cause your opinion really matters automatically - psych. I'd get...

CHRISTGAU: That's from the lead track of Jean Grae's fifth album, "Jeanius," J-E-A-N-I-U-S. The rapping is remarkable for its rapidity, clarity, and idiomatic cadence. The writing has a good-humored polysyllabic literacy that, believe me, is framed at both ends by colloquialisms we can't play on the radio. Forget Missy Elliot and Little Kim, technically, there has never been a more gifted femcee, as women rappers are now sometimes called. But Jean Grae isn't confident that her gifts guarantee her success.

(Soundbite of song "Don't Rush Me")

Ms. GRAE: (Rapping) I know I'm overly sensitive when it comes to, well, just about everything. And I'm so hardheaded, I don't need your help. Like no advice for these records 'less it's me, myself. Like I don't ever want to breathe if it requires assistance. Just, just shut down my system. I'm a victim of choosin' bad love.

CHRISTGAU: Jean Grae loves battle rhymes, witty, profane taunts aimed at her supposed peers, but she also writes a lot about her numerous neuroses and swears that the most striking track on "Jeanius" is as true to life as its title, "My Story." Among other things, it describes an abortion.

(Soundbite of song "My Story")

Ms. GRAE: (Rapping) And you don't know what it's like in waiting rooms and outside, they're picketing, pictures can slay you. They're screaming victims and spitting 'til they shame you. I hold my head low and shiver, push my way through. They put you in a room where you can change into a gown and shower cap shaking as a fiend would do, and that's when you think of fleeing the building, and then they call you and you hear and they're calling your children. They count down from 10 now, you want to stop them but you say it in your head. You're out for the cut, and then you wake up in another room with plenty others. They call it recovery, you're thinking we ain't mothers. And then prescription pills wherein a scripted chills, an understatement, get dressed but you're naked still. And your brain won't think straight, wait, can't finish this...

CHRISTGAU: "Jeanius" is Jean Grae's first major-label album. Its official release was delayed endlessly due to sample clearance hassles. In April, Grae wrote a MySpace post implying that she planned to quit the business, and in a recent interview, she didn't exactly disavow the possibility, just postponed it. She wants to have kids, wants to write full-time, can't stand the videos her bosses at Warners are making. One all sexy, the other giving "My Story" a happy ending. But right now, she added, rapping is her job. She's doing it so well that everyone should hope that's how things remain.

Ms. GRAE: (Rapping) The double standards are dropping me, I'm mechanical now, the catalog is gradually bigger and annually I'm a...

BLOCK: Jean Grae's latest album is called "Jeanius." Our reviewer, Robert Christgau, writes the monthly consumer guide to CDs for msn.com. You're listening to All Things Considered from NPR News. 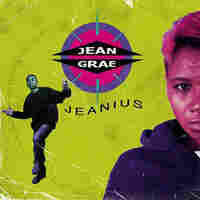 Jeanius has four different album covers, all of which remake classic hip-hop cover art: Public Enemy's It Takes a Nation of Millions to Hold Us Back, Raekwon's Only Built 4 Cuban Linx, Black Sheep's A Wolf in Sheep's Clothing and Das EFX's Dead Serious (shown), with Grae and 9th Wonder shown instead of the original artists. hide caption 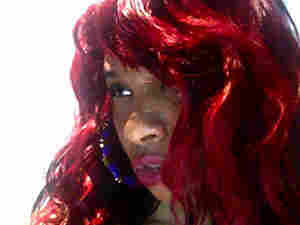 The "real" Jean Grey is a superheroine: Jean Grey-Summers, who's down with Marvel Comics' X-Men crew. That Jean Grey has boundless telepathic powers, can defy death and manipulate life and matter any way she wants.

As for the rapper with the comic book alias, what's she got to wage war with the forces of darkness?

Grae admits that she's a comic-book nerd but that she opts for more down-to-earth pursuits, like cooking, in her off time. "I will definitely get up to cook," she says. "It's another creative process. You're getting to make something from scratch, and create something that didn't exist before."

Jeanius, the fourth full-length solo disc from the Cape Town-born, New York-bred rapper, was supposed to come out in 2004. A stalled release date couldn't stop bootleggers, who have been spreading the songs across the Web for years. Grae has learned that tough 21st century lesson about success: Make music people love, and your fans will even steal to get their hands on it.

Grae had already earned props among hip-hop fans. Her success came partly for what she wasn't: namely, a female MC sexing up her act just to move units.

"I think for the first photo shoots I started doing, I did repeatedly call my publicist and say, 'Can you do me a favor? Can you tell them to stop bringing swimsuits? Because there's really no use for them. And it's not going to happen,' " she recalls.

When Jeanius was shelved indefinitely, Web-savvy fans dubbed countless bootleg copies, and the album was officially an "unofficial" hit. Since the disc has gone legit, Grae went back to give it another listen. She tuned in partly with a critical ear — Grae is, after all, a classically trained musician and the daughter of two jazz artists.

Going back to Jeanius was also a personal journey. When she pressed play on the track "My Story" — an autobiographical cut about abortion — she says, "It was a good cry. But it was finally being in comfortable place to talk about it and really detail the whole thing and not trying to sugarcoat anything."

Grae dropped another personal bomb on her fans earlier this year: She announced her retirement from the rap game, at least for now. Grae made the move, she says, because of issues with her record label.

"So I just kinda stepped away," she says. "And I was like, 'Before I make myself completely sick and end up in jail with the rest of the female rappers, I'm gonna just chill out and see what happens right now.'"

A few months later, Jeanius hit stores. It's an uneven product that gets bogged down at times by sing-songy hooks and beats that don't inspire. For an MC with such a dynamic moniker, it's surprising to hear Grae get locked in a wooden, two-dimensional flow at times. At her best, though, Grae cracks open a can of flawless confidence.

Right now, Jean Grae is thinking outside of hip-hop. She wants to start a family, perfect her cooking skills and maybe do some work in film. But she's not likely to stray too far from the world that made her don a superheroine's name. From the way she talks about rap, it's clear that Grae's a junkie for life.