Listen
Jazz Omnivores: 'Dying Will Be Easy' (And Fun)

In our globalized musical environment, you never know where the next distinctive jazz ensemble (or composer) is going to come from. In the case of the nine-piece little big band Fight the Big Bull, it's Richmond, Va.

Fresh Air's jazz critic reviews Dying Will Be Easy, the debut album from a nonet that traffics in woozy trombones, blurry-edged musical lines, layered melodies and countermelodies, and a throaty, vocalized sound that can almost come across like choral singing.

Dying Will Be Easy, a four-tune album that's barely over a half-hour long, was originally intended to be a demo; it showcases the first four pieces frontman Matt White composed for Fight the Big Bull. (More recent tracks are available on the band's MySpace page.)

Below: Hear the album's title track, courtesy of Song of the Day from NPR Music.

Dying Will Be Easy 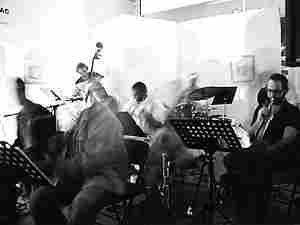 Tonight at NPR Music, Fight the Big Bull will open a special concert at Joe's Pub in New York City, followed by The Phenomenal Handclap Band and headliner Lee Fields & The Expressions. The show is scheduled to begin at 9:30 p.m. ET. Click here for more information, and to listen to the show when the time comes.

Ambitious jazz musicians used to have to relocate to big cities with reputable scenes: to learn from elders, collaborate with peers, play on big stages and meet potential financial backers. But the adventurous nonet known as Fight the Big Bull formed in an age of widespread jazz education and instant global communication. That zeitgeist may explain how a nine-piece group from Richmond, Va., could score a breakthrough gig in Chicago, well before it issued its debut on a Portuguese record label. The generation gap may also shed light on how Fight the Big Bull has made some of today's most exuberant and relevant improvised music.

On Dying Will Be Easy, the band sounds like the brainchild of a young composer who grew up with rock on the radio, jazz canons in the conservatory and everything else at his disposal on the Internet. (For evidence, search YouTube for "Fight the Big Bull," "Weezer" and "singalong.") Cue Matthew E. White, who leads the band, plays the guitar and writes the songs. In the title track, his orchestration has the fullness and audacity of a Mingus or Ellington; blaring horns and snare-drum rolls render the exotica of a slow Spanish march into a loud, blown-out stampede. When White points to J.C. Kuhl for a sweet-hued yet driving sax solo, the beat turns forward-pressing and rockish — equal parts Sonny Rollins and Sonic Youth. Finally, when White indulges himself a little on his guitar, it sounds as if he were trying to restart a dying chainsaw by shouting into it.

This sort of sonic amalgam isn't exactly the sui generis sort of originality associated with the greatest of the greats. But even within a musical generation defined in part by the aesthetic of the mash-up, it's not only a unique admixture; it's also a thrilling one. The band's liberal mixing of musical metaphors seems to have long passed the experimental stage, and now sounds as if it were already the most natural thing in the world. If Fight the Big Bull can continue to make risk-taking sound this appealing, it'll be hard to keep the rumpus confined to Richmond.

The broadcast version of this review misidentified a distorted trombone played by Bryan Hooten and incorrectly cited the album's title. The audio on this page has been updated.