Accessibility links
Texas Football Team Thrives On Tonga Connection Trinity High School in Euless, Texas, has the nation's top-ranked football team. Many credit the squad's success to the town's large Tongan population — and the large players it produces. The team is at the core of two communities that believe in football and family. 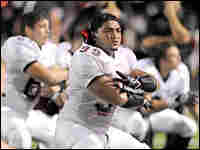 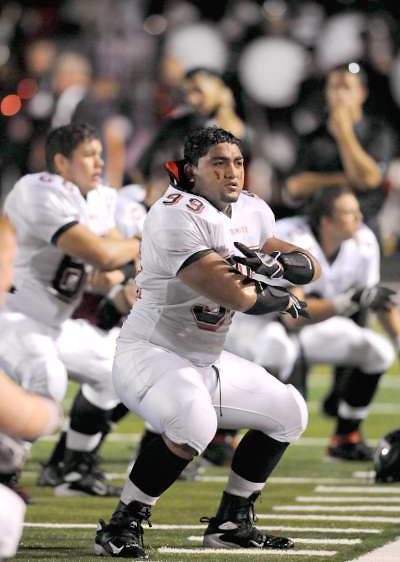 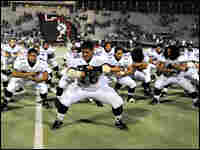 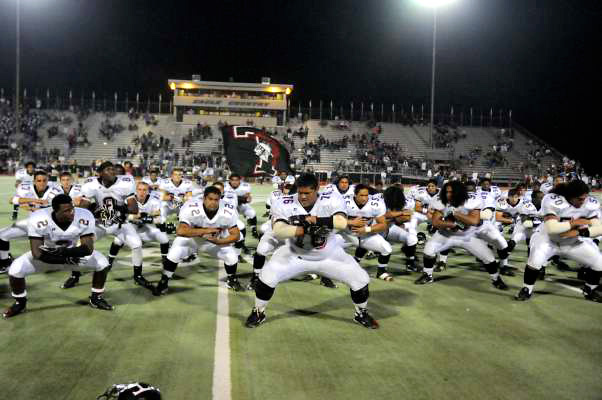 Isikeli Cocker (76) leads the Trinity Trojans through its ritual haka.

Trinity High School in Euless, Texas, has the nation's top-ranked football team, according to Sports Illustrated. The idea that the state of Texas could field some of the best players in high school football is not exactly breaking news.

But the Trinity Trojans are different because the backbone of this team, its offensive and defensive heart and soul, is Tongan — many of the players' families are from Tonga, the island nation southeast of Fiji.

The reasons so many Tongans are in Euless may seem rather random. But the reasons for the team's rise to the No. 1 national ranking are anything but random: Many credit the squad's success to the Tongan players' size.

On autumn Friday nights in Texas, high school football stadiums are packed with hundreds of thousands of people, celebrating one of their most important and historic tribal customs.

The rituals are precisely defined: There must be music and dancing, chanting and marching. Sticks are twirled and thrown spinning into the night sky.

The tribe's future — its strong, beautiful young men and women — paint their faces, don costumes and perform amazing feats of physical prowess for the pleasure and admiration of their people.

But when it is Trinity's warriors who are preparing for a Friday night battle, there is an added ritual.

A massive Tongan offensive lineman, Isikeli Cocker leads his fellow Tongans and the rest of his Trinity teammates in a haka, just before kickoff. Cocker moves around the field, gesturing in a primal, ancient way. His men affirm their readiness with chants and slaps to their legs and chests.

Watching this spectacle unfold in a North Texas suburban football stadium seems both surreal and somehow just fine, totally appropriate. The visiting football team stands there and watches, some try to ignore the spectacle. But it's hard not to stare.

And when it's time for the team captains to meet at the 50-yard line for the coin toss, the Trinity players seem to have a slight edge in the swagger department. It doesn't hurt that one captain is a Tongan the size of a small skyscraper.

Mike Harris, the young principal of Trinity High, says a lot of people are unfamiliar with the Pacific island nation. He says people often ask, "What is the Tonga population, and where are they from, where is Tonga, where are those islands?"

As for Euless, it's a suburb between Dallas and Fort Worth, next to the big international airport.

"Whenever we travel to other schools and other events, or people come here, they're surprised to see our population," Harris says.

Trinity is a big school with a sprawling campus. Its 2,200 students are in three grades, from 10th to 12th.

When you walk in the front entrance, the first thing you see are dozens of national flags hanging from the ceiling. Each flag represents the home country of one of the students, and it looks a little like the Olympic Games in there.

Harris says the entryway serves two purposes: First, to impress first-time visitors, and second, to make the students feel like the high school honors their heritage.

He says one of the unique things about Trinity that he's always loved is its diverse population.

"We have cliques, just like every school has cliques," he says. "But the majority of our cliques are all interest-based — not racial-based."

Of course, let's not get carried away. This is suburban North Texas, and Trinity is half white.

But another 15 percent are Hispanic; 15 percent are black; and 13 percent are Pacific Islander. To be Pacific-specific, Tongan. So how did a community of more than 3,000 Tongans come to be in Euless, of all places?

In the early 1970s, a Tongan man who worked for American Airlines moved to Euless with his wife.

"The first Tongan couple that moved here to Euless is Halatono and Siupeli Netane," says Ofa Faiva-Seile, a Tongan whose family moved to Euless when she was a teenager in the mid-1980s. Faiva-Seile has been recording an oral history of the Tongan community in North Texas.

"When they arrived here, they realized that the cost of living was inexpensive, [with] plenty of jobs over at DFW airport," she says. Then they told their friends and family, and the area drew an influx of people from the island.

Faiva-Seile was in the first wave of Tongans to arrive. At first, the big brown girl was an outcast, whom nobody knew was from Tonga.

"I remember coming here and going to high school at North Richland Hills, where it was nothing but cowboys. So I felt very out of place," she says.

"I didn't have a lot of friends, you know, I wasn't approached a lot. But I moved to Trinity, and I'll tell you what, there was just a whole different atmosphere to Trinity High School."

The word got out in the Tongan community that Trinity High School was a place where Tongans could be themselves.

And the conservative Texans discovered that, surprisingly, they had a lot in common with the Tongans. For example, Tongans are intensely family- and community-oriented, and they also don't believe in sparing the rod.

"The police here can pick up a kid, and run him over to the house and say, 'Mom, dad, we caught him mouthing off' — or stealing, or whatever," Faiva-Seile says.

That sort of accountability goes over big here. And this sports-happy Texas culture also heartily approves of the Tongans' tendency toward the physical. Trinity High's head football coach, Steve Lineweaver, can describe it in a very political way.

"I think we've been blessed with a diverse group that brings their own strengths to the program, predominantly Tongans, that bring a passion for the game of football," he says.

Asked if that passion included a love for hitting their opponents on the field, the coach agrees.

"They're very physical," Lineweaver says, and "a lot of them are very large."

They are large — and when they're in high school, fast, too.

In the Trinity weight room, the team turns weight-training into a party. They face each other in rows and lift and jerk heavy free weights above their heads, then drop them to the rubber floor like they're big and bad — and don't they know it.

Senior wide receiver Alex Jones says he loves his Tongan teammates. "We've got a lot of freaks of nature, really, that come and kick people's butts," he says.

A New Tradition Is Born

As the Tongan community has grown in Euless, so has the success of Trinity football. In just the past three years, they've won their first two state championships. Last year, all five offensive linemen and their tight end were offered college scholarships.

While other top Texas high school football programs have gone to the spread offense, throwing the football all over the lot, Trinity plays smash-mouth, running it down the other team's throat.

Jones says he takes great pleasure watching the other teams' high-powered offense, with their speed and great hands and talent, standing forlornly on the sidelines, their defense being slowly ground into the dust, the game clock spinning like a merry-go-round.

The Tongan players at Trinity are, not surprisingly, proud of themselves, their team and their school.

They are a big success at something that counts for an awful lot around here. And lest any non-sports-fans sneer, they and their teammates earn every win with their sweat and blood in the cruel Texas heat.

"We're not pass-blocking," a coach yelled at a recent practice. "Stick your nose between his numbers. Here we go — hit!

"Good! That's what some of you guys have got to learn," he said. "You've got to bring the hat!"

Defensive end Vai Sapoi, a senior, says his parents told him when he was in the fourth grade that if he wanted to play football, he had to get his grades up.

Sapoi says he wasn't always the smartest guy in the classroom, but he worked his tail off so he could play for Trinity.

"Playing for Trinity, it's not just a sport to everybody, you know," he says. "Everyone takes it seriously. It's more like a career."

On a recent Friday night, the stadium stands were packed. Midway through the first quarter, a Trinity running back burst through the middle of his huge offensive line. He cut right, exploded into the opponent's backfield and streaked down the sideline, the defensive safeties giving desperate chase.

The opposing head coach smacked his clipboard against his leg in frustration as the defenders finally pushed the Trojan runner out of bounds inside the 10.

Everyone knew that play was coming. The problem is, how do you stop it?