Accessibility links
Nancy Wilson On Piano Jazz The brilliant song stylist Nancy Wilson has recorded more than 60 albums and moved effortlessly between jazz, pop and R&B. In recent years, Wilson has hosted NPR's popular program Jazz Profiles. She joins McPartland to swap stories and sing songs, including "Easy Living" and "The Nearness of You." 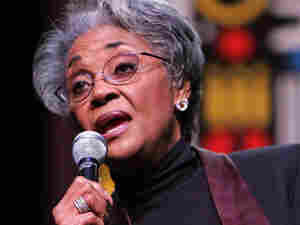 Nancy Wilson was born in 1937 in Chillicothe, Ohio. Her vocal talents began attracting attention when, at age 15, she won a talent show in Columbus in which the prize was a twice-a-week television program. In addition to the TV show, Wilson began a regular gig with Rusty Bryant's band and sat in with the major jazz acts that came through nearby Columbus. Cannonball Adderley was particularly fond of her singing, and this meeting eventually led to a recording contract with Capitol Records and a series of releases with Billy Mays' Orchestra, George Shearing and Adderley.

Wilson eventually branched out and began recording music that made inroads into pop and R&B. She toured with artists such as Nat King Cole, LaVern Baker, Ruth Brown and Sarah Vaughan. She also found a niche in television, and after many guest appearances, she was given her own Emmy-winning variety program, The Nancy Wilson Show.

After many successful years with Capitol, where her sales were often second only to The Beatles, Wilson moved to Columbia in the 1980s. While she continued to perform and record pop music, she also recorded a string of solid jazz albums and performed with the likes of Ramsey Lewis, Benny Golson and Hank Jones. In addition, her forays into pop made her a favorite on radio stations playing the "new adult contemporary" format in the 1990s.

Wilson's knowledge of music and her personal relationships with jazz musicians made her the perfect host for the NPR series Jazz Profiles.