Accessibility links
'Tax Extenders' Add To Cost Of Bailout Bill In addition to the initial $700 billion aimed at the Wall Street bailout, the measure the House takes up Friday is loaded with provisions to continue existing tax breaks that lawmakers and lobbyists worked out in past congresses. 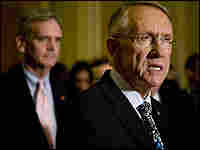 "It would be a blight on this Congress not to pass these tax extenders," said Senate Majority Leader Harry Reid, a Nevada Democrat. Brendan Hoffman/Getty Images hide caption 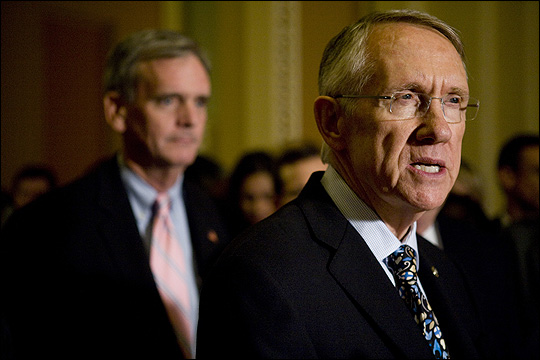 "It would be a blight on this Congress not to pass these tax extenders," said Senate Majority Leader Harry Reid, a Nevada Democrat.

The House is supposed to take another vote Friday on a massive rescue package for Wall Street. House members rejected the measure Monday, stunning their leaders and the Bush administration.

Now there's a chance for a do-over. And this time, the bill has sweeteners added by the Senate to make it more appealing to Main Street.

The bill began as a three-page request from the White House. In the House, it picked up more than 100 pages of restrictions and oversight requirements.

And on Wednesday, the Senate turned it into a 450-page behemoth.

In addition to the initial $700 billion aimed at the Wall Street bailout, the bill now has provisions for disaster relief for states hit by hurricanes and floods. It also has middle-class tax relief from the dreaded alternative minimum tax.

There are also provisions to continue existing tax breaks that lawmakers and lobbyists worked out in past Congresses.

"It would be a blight on this Congress not to pass these tax extenders," Senate Majority Leader Harry Reid said Wednesday. He was arguing that the extenders help Main Street the way the $700 billion helps Wall Street.

Section 503 of the bill has an "exemption from excise tax for certain wooden arrows designed for use by children." It's there to help Rose City Archery Inc. in Oregon. It will save the company 39 cents per arrow.

And for Hollywood, the bill expands a $15 million tax break — originally written for small filmmakers — so any filmmaker can use it. Provided, that is, the movie is made in the U.S.A.

Washington's leading watchdog on provisions like these is Taxpayers for Common Sense. The group's president is Ryan Alexander.

"Many of the tax extensions are extensions of very narrow provisions for specific industries," Alexander says. "A lot of these different provisions have relatively low costs. But they add up — all the tax provisions together add up to about $110 billion."

And there's still more in the bill. Energy provisions, for one thing.

The Senate and House had been negotiating a new energy policy. But this week, the Senate took its version of the provisions and put them in the Wall Street bill. So much for the House negotiators.

Thus, programs that encourage so-called dirty fuels — programs that the House members thought they had killed off — are now back, tied to a bill that many lawmakers feel pressured to pass.

"I think that what happened was that the oil industry was able to exploit the situation for one last hurrah before Congress went out of town," says Wesley Warren, program director for the Natural Resources Defense Council.

But this isn't like the usual carefully crafted tax bill. Congressional leaders didn't have the time to target provisions for individual lawmakers. Rather, the leaders took big blocks of pending bills and plugged them in.

"It isn't the finest hour of the Congress in terms of precision negotiating," says Ken Kies, one of Washington's premier tax lobbyists. "But let's face it, we're not in an environment right now where regular order is the operating way in which things are getting done."

On balance, Kies calls this a good package.

"It's sometimes OK to be not cynical in Washington," he says. "It's rarely true, but it's occasionally the right thing to do."

So maybe the only cynical note is this one:

As Congress enacts this rescue for Wall Street, it is helping the rest of America with the tax breaks.

It just skipped the step of making up for that lost revenue.