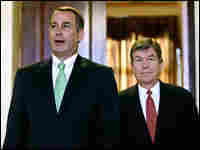 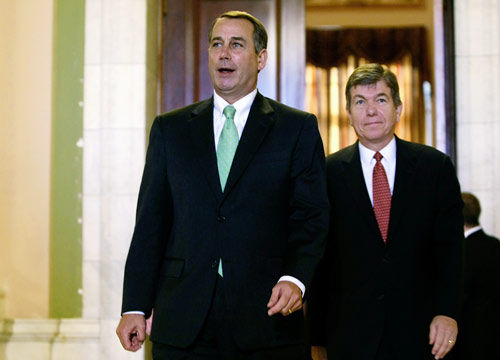 President Bush signed a $700 billion financial bailout package Friday, shortly after the U.S. House passed the rescue measure, in a vote of 263-171. The action paved the way for the government to start buying up troubled assets from financial institutions caught on the wrong side of record home foreclosures.

"I know some Americans have reservations about this legislation. ... In this situation, action is clearly necessary, and ultimately the cost to taxpayers will be far less than the initial outlay," the president said after the House action.

He said it would take some time for the legislation to have its full effect on the economy.

"There were moments this week when some thought that the federal government could not rise to the challenge. But thanks to the hard work of members of both parties, in both houses, and the spirit of cooperation between Capitol Hill and my administration, we completed this bill in a timely manner," he said in remarks in the Rose Garden.

The House had rejected a similar bill on Monday, causing the Dow Jones industrial average to plummet almost 800 points. The Senate approved a revised version earlier this week, sending it back to the House for another try.

For more than a week, investor sentiment has been revolving around the twin suns of Capitol Hill and Wall Street. Investors had already factored the vote into share prices, and that's part of the reason the stock market moved sideways after the vote.

The Dow had been up about 200 points Friday morning but began a slide after the vote, with investors apparently showing concern that the economy is still in for a rough ride. The Dow was down by 157 points at the close of trading. Analysts say investors are assuming a recession is in the offing and expect the Federal Reserve to lower interest rates to blunt that downturn.

The 450-page bill gives the government the unprecedented authority to buy troubled assets on Wall Street's balance sheets. It contains provisions favored by House Republicans, including $149 billion in tax breaks, a higher limit on federal bank deposit insurance and changes in securities law.

Rep. Michele Bachmann (R-MN) voted against the bill. Treasury Secretary Henry Paulson "pulled the fire alarm and cried fire, fire from the roof," she said on CNBC shortly before the vote. The Senate's version of the bailout bill is nothing more than a dressed-up version of what she voted against Monday, Bachmann said.

"This doesn't address the fundamental problem of the credit crisis," she said. "Coming down the road for the next few years, we may rue the day that this passed."

The credit markets have been nonplused by all of this activity in Washington. Banks that have cash aren't lending it. The cost of borrowing dollars in London has been rising and shows little sign of easing. The London Interbank Offer Rate is considered a good barometer of how much banks trust — or don't trust — each other. And right now banks have determined they aren't willing to risk lending out their cash because they might not get it back. Their wariness is not misplaced. European and U.S. governments have had to rescue five banks in the past week alone.

Because of the tight lending conditions, banks and institutional firms are going to the Fed to get cash. Commercial banks averaged $44.5 billion in daily borrowing over the past week — up from a little more than $39 billion a week earlier, the central reported Thursday.

California Gov. Arnold Schwarzenegger told U.S. Treasury Secretary Henry Paulson in a letter Thursday that the state may need to turn to the federal government for short-term borrowing if conditions in the credit market don't improve soon. California usually borrows money this time of year to pay for the state's basic operating expenses and then repays the loans after tax revenues begin pouring in the following spring.

"Absent a clear resolution to this financial crisis that restores confidence and liquidity to the credit markets, California and other states may be unable to obtain the necessary level of financing to maintain government operations and may be forced to turn to the Federal Treasury for short-term financing," the governor wrote.

Investment firms are facing the same dilemma. They drew almost $148 billion for the week ended Wednesday, compared with just $88 billion the previous week. Commercial banks often go to the Fed to get loan privileges so they can cover their reserve requirements. Back in March, as it scrambled to avoid a market meltdown, the Fed gave investment houses permission to do that, too. This is the broadest use of the central bank's lending power since the Great Depression.

While watching the unfolding events in the House, investors are having to digest a litany of doomcasting reports that seem to indicate the economy is headed for recession. The Labor Department said employers slashed 159,000 jobs from their payrolls in September, the most in five years.

That news comes on the heels of two other gloomy reports Thursday: Weekly jobless claims reached a seven-year high, and factory orders fell 4 percent in August, a full percentage point worse than economists had forecast. Adding insult to injury, the Mortgage Bankers Association said U.S. foreclosures in the second quarter rose to a record 2.75 percent of all mortgages issued that quarter.

Investors are also focusing on how the U.S. Treasury is going to administer the program. Analysts said that until the Treasury explains how it will buy and sell the toxic debt, the nervousness will continue.

"Once the legislation is signed, we're going to be going out and lining up some advisers from the private sector," Paulson told reporters. "There are a wide variety of tools that we have that come with this legislation, and which combined with the other authorities we have ... are going to be very important in protecting the stability of the financial markets, which ultimately protect the economic security of the American people."

Indeed, the Treasury will have to walk a fine line. On one hand, there is concern that the Treasury will buy the debt at such bargain-basement prices that it will hurt the banks rather than help them. Or, if the Treasury just gives the banks the price that the market would give them right now, it raises the question of why the government needs to be involved in the first place.

What seems clear is that the rules governing the financial industry will be under scrutiny when the new Congress returns next year.

"Starting in January ... we have to rewrite how to finance in America," House Financial Services Committee Chairman Barney Frank (D-MA) said after the vote. "It would be highly irresponsible, a betrayal of our oath to stop here. ... Now we have to perform more serious reform and it will be our job to enact a set of regulations for all of the financial industry." 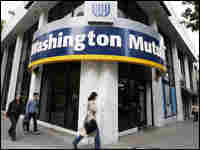 Today marked the first day of bankruptcy proceedings for Washington Mutual, the largest commercial savings and loan to fail in U.S. history. Washington Mutual collapsed last week, 119 years to the day after its founding.

For casual observers, bank collapses like this one may seem to have appeared out of the blue. But for executives like William Longbrake, who worked at Washington Mutual for 26 years before September's tumult, the collapse looked more like a slow unraveling.

Longbrake served as the savings and loan's chief financial officer from 1982 until 2002 and as a senior executive until a few weeks ago. He says he's free to talk now about the trouble he saw coming, because no one is left at the thrift to sue him for breaking nondisclosure agreements.

"There was something that disturbed me deeply, and it actually was a long time ago. It was probably about 2003," he says. "And that's when home prices began to rise at a rate that was much faster than people's incomes were rising. Housing prices felt good when they were going up. Everyone was giddy with all the wealth they were accumulating, and a lot of them spent it. The problem was that, all the time, as housing prices were getting higher and higher and higher, the affordability was declining. Eventually, the ability of a lot of people to buy homes just disappeared, and we had too many houses."

It's now a matter of public record that Washington Mutual, which most people call WaMu, was a central player in the housing bubble Longbrake describes. It lent money to a lot of people to buy homes they just couldn't afford. It might seem self-serving of Longbrake to say he recognized the bubble for what it was so far back.

But in off-the-record coversations, former WaMu board members agreed with Longbrake's account. They say he did warn them that the housing market was becoming too risky and that WaMu shouldn't be so heavily involved.

Management just didn't listen. It was making too much money.

"When you're in good times and things are going up, everyone tends to be optimistic and straight-line that out to forever," Longbrake says. People raising red flags don't get attention, he adds.

Signs Of A Bubble

Longbrake says that by 2006, it was clear inside the thrift that too many of its mortgage customers were not paying back their loans. Like other banks, WaMu began moving toward making more sensible loans and away from offering loans to customers who weren't such solid bets. The change in course proved too little, too late. By reducing credit, the banks reduced demand for new houses — just as builders were flooding the market.

Suddenly, banks around the nation were squeezed by bad loans, to customers and to developers. Longbrake says he knew WaMu was in trouble, but he didn't expect the current global banking crisis. That's because bank insiders know how strong or weak their portfolios of mortgages and mortgage-backed securities really are. But outsiders have no way to know exactly how risky a bank is.

Longbrake note that banks make public a great deal of information. It's just not necessarily the most revealing data. "What we're talking about is loans," he says. "You don't have exact delineation of the type of loans. You can make your own guesses. One bank could have very conservatively listed loans, and another has garbage."

As a result, banks have pulled back from doing business with other banks: They can't tell the good ones from the ones that are built on garbage. That lack of trust fueled the credit crisis that has threatened to cripple the national economy.

Longbrake is not done giving dire warnings. He supports the $700 billion bailout approved by Congress this week, but he says it won't solve the central problem. He points out that this crisis was set off when inflated home prices started to fall. They're not done falling yet, he predicts.

"Many expect those prices to drop by 15, 20 percent," he says. "You'll still going to have losses that the system has to absorb, and until that's completed there will be negative pressure on financial institutions and probably negative consequences for the economy as a whole. I hope that doesn't sound too dark."

What remains now, he says, is the need for government intervention to calm the markets so that irrational panic doesn't make the correction more painful.

Longbrake retired shortly before the collapse. On Thursday, JPMorgan Chase, which bought what remains of WaMu, fired almost all of the remaining senior executives.

This story was produced in collaboration with Chicago Public Radio's This American Life, which is airing a special one-hour edition on the economic crisis Oct. 4.