Accessibility links
Music On The Mind: Oliver Sacks' 'Musicophilia' Ever wonder how a song gets stuck in your head? Neurologist Oliver Sacks explains this and other mind-music mysteries in his new book, Musicophilia.

Ever wonder how a song gets stuck in your head? Neurologist Oliver Sacks explains this and other mind-music mysteries in Musicophilia, a collection of essays detailing the 20-30 neural networks that allow us to decipher pitch from melody, and cacophony from chorus.

Sacks is a professor of neurology and psychiatry at Columbia University Medical Center and the author 10 books, including of Awakenings and The Man Who Mistook His Wife For A Hat.

This interview was originally broadcast on Oct. 17, 2007. 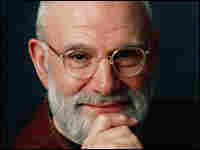 How Musicians Play from Memory

A Relationship Between Music and Math?

Physician and author Oliver Sacks has spent 40 years studying the human brain and illuminating a host of neurological disorders through the compassionate telling of his patients' stories. His newest collection of clinical tales, Musicophilia, examines the uniquely human power of music.

Sacks is the author of numerous books, including Awakenings, about people who suffered Parkinson's-like paralysis for decades after being stricken with sleeping sickness, and The Man Who Mistook His Wife for a Hat, a national bestseller about the far reaches of neurological experience. Although Musicophilia revisits some of his earlier cases, Sacks has refocused the stories on music's healing role, making the book "not so much a greatest-hits collection as a purposeful set of remixes," according to the Los Angeles Times.

The neurologist explains that there is no single musical center in the brain, but rather 20 to 30 networks spread throughout every region that analyze different components of music, from pitch to melody. That's why a symphony that moves some people to tears is perceived by others as the cacophonous clattering of pots and pans, a condition known as amusia. Sacks also tells of people haunted by musical hallucinations, in which they hear a set of tunes, or even full-fledged choirs inside their head, a phenomenon one patient describes as his "intracranial jukebox."

An amateur pianist who calls himself "one of the less musical members of a musical family," Sacks recounts that when asked at age 5 "what I liked most in the world, I said, 'smoked salmon and Bach.' And almost 70 years later," he adds, "this is basically still the same."

Indeed, once music is part of us, it seldom takes its leave. Sacks tells the story of a man with Alzheimer's who "has no idea what he did for a living or what he did 10 minutes ago," but who "remembers the baritone part to almost every song he has ever sung." Music, Sacks says, "is one of the only things that keeps him grounded in the world."

This discussion of Musicophilia took place in November 2007 at the Politics and Prose bookstore in Washington.