Accessibility links
Holmes Makes Broadway Debut In 'All My Sons' Tickets for the Broadway revival of Arthur Miller's play All My Sons have been selling out, and John Lithgow and Dianne Wiest have received accolades for their performances. But the chance to see Katie Holmes' Broadway debut really has theatergoers excited.

Listen
Holmes Makes Broadway Debut In 'All My Sons' 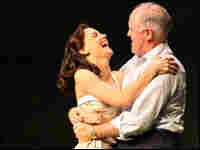 Katie Holmes and John Lithgow appear together in a Broadway revival of Arthur Miller's All My Sons, directed by Simon McBurney. Joan Marcus/Courtesy of Boneau/Bryan-Brown hide caption 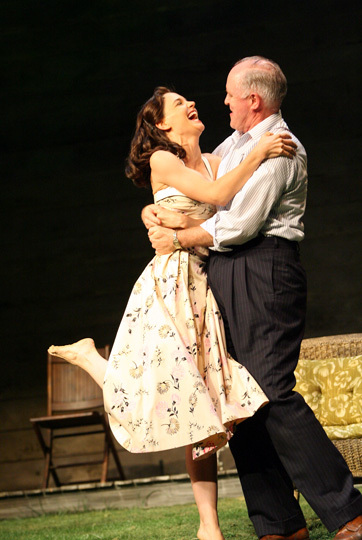 Katie Holmes and John Lithgow appear together in a Broadway revival of Arthur Miller's All My Sons, directed by Simon McBurney.

On The Soapbox Blog

In a new production of Arthur Miller's 1947 play All My Sons, John Lithgow stars as Joe Keller, a man who runs a factory that made airplane components during World War II. Joe's oldest son is a pilot who has been reported missing in action. Dianne Wiest plays Joe's wife, and Patrick Wilson his surviving son.

And then the girl-next-door comes back to town.

The girl in question, Annie Deever, is played by Katie Holmes. Annie's father is in prison for ignoring cracks in airplane parts made in Keller's factory, defects that led to the deaths of 21 young pilots.

The production has been selling out, and John Lithgow and Dianne Wiest have received accolades for their performances. But the chance to see Katie Holmes in her Broadway debut really has theatergoers excited.

After a show this week, NPR's Scott Simon caught up with Holmes and Lithgow in Lithgow's dressing room.

Lithgow noted that Miller's play is very pertinent to these economic times.

"It's a play about selfishness verses generosity of spirit, basically, and I think these few weeks everybody is consumed with all the issues of business collapsing, fears of business not working as a result of selfishness and greed," he said. "And I think that is a deep, deep theme in this play from 60 years ago. And it's just uncanny that it should also be connected with the notion of war profiteering, and dishonesty, and hiding the truth and accountability — all of these issues are right in the front of people's brains. And here is Arthur Miller's first play."

All My Sons marks Lithgow's 20th Broadway show and the fifth play he's done since his TV sitcom Third Rock From the Sun ended in 2001. He said it's the audience that keeps him coming back to the theater – that, and the applause.

"Well mostly the applause," he said. "It's being there with the audience. Living through the story at the same time they're hearing it. Live bodies. And this play is the best possible example of that. I mean it's so emotional for us on stage. And it's equally emotional for them in the audience, and there's no equivalent to that in film and television. I do what I can to turn the stage crew into an audience. But it never quite works."

The Broadway experience is a new one for Holmes. All My Sons is her first play since high school, though she said she's been interested in doing live theater for a long time.

"I always wanted to do a Broadway play — since I was a little girl," Holmes said. "And I've been looking for something for years ... and I'm so happy and I feel so lucky, because this play and this cast and this character — it's so exciting to me."

Holmes said that tackling the theater has taught her new lessons about acting.

"I've really enjoyed having the opportunity to rehearse for this amount of time, to work on a character and discover more and more ... every night is different. And just the whole experience of a live performance is incredibly different," she said.

"It's been a wonderful thing for us," Lithgow added. "Just watching Katie achieve things that she never expected she could do or would ever be called upon to do. It's been absolutely wonderful and astonishing. I mean her last scene is right out of Aeschylus. And she hits all those high notes. It's simply amazing."

Not that this was achieved easily. The play's director, Simon McBurney, held an uncommonly long eight-week rehearsal period.

"It was exhausting," Lithgow said. "I mean the rehearsal process has been the hardest thing I've ever been through. [McBurney] pushed us all to the limit. And it's the only way to do this play. And I think the audience — again, I can't speak for them — but they know they're in for something very different than the usual revival of an Arthur Miller play."

Lithgow said it was the prospect of working with McBurney that attracted the actors to work on the production.

"All of us to some degree know Simon's work, which is really kind of visionary, pushing the edge of the envelope and using all kinds of projection light and sound technology," Lithgow said. "And the thought of applying that to an Arthur Miller play was just extremely exciting."

He said that his and Holmes' characters have a complex relationship, "because Joe has this rage in him, almost inexplicable rage toward Annie having to do with the fact that she's so angry at her father for what he did.

"But there's a wonderful moment when [Annie] says, 'Don't yell at him, he just wants everybody happy,' and I say, 'Yeah, that's right, can you stand steak? Let's all go out and have a good time,'" he said.

Lithgow says he loves that moment because it is Annie's "moment of forgiveness, his [Joe's] moment of somehow or other quickly burying that anger."

The moment, Holmes said, "just reveals this sort of understanding that Ann has for him, and that I think he has for her. And I love the joy that they create together. They're both in on it in a way."

"It's also great...when we dance together," said Lithgow, chuckling. "I love it. All through rehearsal I kept saying, 'Can't I dance with Annie?' And we finally found our moment."