Accessibility links
Obama Camp Scours Southwest Virginia For Votes Barack Obama is seeking votes where Democratic presidential candidates normally don't. That includes tiny Appalachian mountain towns like those in southwestern Virginia. But local voters have many questions about Obama's positions, and he faces obstacles even among some Democrats. 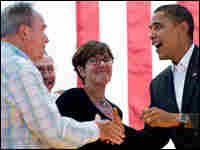 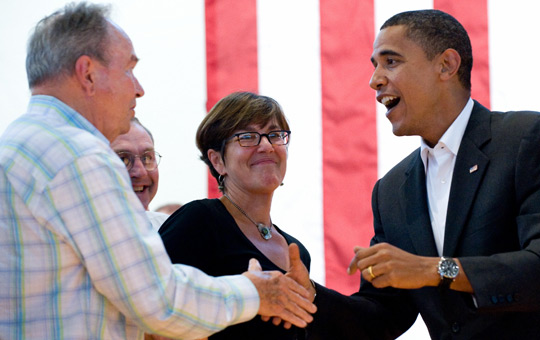 That includes tiny Appalachian mountain towns where Obama volunteers are telephoning their neighbors and knocking on doors. Voters in this strikingly beautiful hill country could help determine the election, because the Appalachians stretch across one battleground state after another, including western Pennsylvania, southeastern Ohio and the western part of Virginia, a state that has not supported a Democratic presidential candidate since 1964.

This year, Obama enjoys strong support in Virginia's urban areas, but he faces a tougher battle in places like rural Dickenson County, which seems to lean toward Republican John McCain.

Recently the Obama campaign sent a list of voters to Dickenson County. It arrived at a phone bank inside a historic building, where local resident Danny Edwards picked up the phone. He started dialing his neighbors in a region where many families have remained for generations.

"This is Danny," he said to one man on the list. "My voice familiar?"

Upon learning that his acquaintance was an undecided voter, Edwards began raising doubts about McCain.

"He's 72. He's had cancer," he said, before going on to ask about the vice presidential candidate who would succeed McCain in the event of his death. "Did you see the interview she did with Katie Couric the other night?"

Obama campaign offices have opened across southwestern Virginia. Michelle Jenkins, a local Republican official, has noticed all the new offices but professes to be unconcerned.

"We don't have to do that," she says, contending that the established Republican organization will bring home the local vote for McCain, just as it did two times for George W. Bush.

This part of Virginia is willing to vote for Democrats: It has a Democratic congressman, and it has voted in past elections for Mark Warner, the former governor and this year's Democratic U.S. Senate candidate. But it is socially conservative.

Local voters have many questions about Obama's stance on gun rights and his view of the coal industry that historically dominated the Appalachians. Republicans have hammered away at those issues. It's also easy to find voters who erroneously believe that Obama is Muslim and hostile to their Christian faith. (Obama is a practicing Christian.)

Obama has clearly won some local support, but he faces obstacles even among some Democrats.

"It's just race," explains Rex McCarty, a Democratic activist and the owner of the weekly newspaper, the Scott County Virginia Star. "Some folks don't care where he comes from; he's a black man."

In the Democratic primary between Obama and Hillary Clinton, some western counties gave Obama as little as 9 percent of their vote.

McCarty was a delegate for Clinton who says he has easily switched over to Obama. But another Clinton-supporting Democrat he knows is having trouble with her party's nominee.

"I never really thought about whether or not that I was racist, or however you want to put it," said Tina Graham. She fears Obama would focus on African-Americans at the expense of poor white people like herself. "It's just the fact that I think that he will represent them, and what they want, and what they need. ... They're his people, they're his race."

McCarty jumped in to disagree — and worked to construct an argument for a black presidential candidate that could survive the Virginia hills.

First, McCarty said, "This young man is of a mixed-race family."

Second, he said, Obama's family struggled when he was young — something that many Appalachian families can relate to. Many people in this region have felt downtrodden and ignored, including McCarty himself, who grew up in a poor family with 12 children.

"We were also treated less than what I think we should've been, growing up," he said.

Graham listened skeptically. As a Democrat, she said she won't support McCain, but she still sees a choice: She can swallow her uneasiness and vote for Obama — or cast no vote for president. She hasn't decided what to do.

Decisions like hers could affect the outcome in one of the handful of tossup states that may decide the 2008 election.