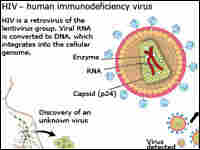 See diagrams showing the inner workings of the HIV and HPV viruses.
Annika Rohl/The Nobel Committee for Physiology or Medicine

Half the $1.4 million prize goes to Luc Montagnier and Francoise Barre-Sinoussi for their discovery of the AIDS virus. The other half goes to Harald zur Hausen, who established that most cervical cancer is caused by two types of human papilloma viruses.

In the case of HIV, or the human immunodeficiency virus that causes AIDS, the Nobel committee clearly waited until the dust settled over a bitter controversy over who really discovered the virus in the early 1980s — Americans or the French. The committee apparently accepts the results of an investigation done 15 years ago, which concluded that the American virus was actually a contaminant from the French lab.

Zur Hausen's work with HPV led to highly effective new vaccines — among the first to protect against cancer.

In some versions of this interview, we said of the human papilloma virus (HPV) vaccine, "[T]his is really the first time that anybody has made a vaccine that demonstrably protects against cancer." In fact, it was the first vaccine designed to prevent cancer. For more than 25 years, the hepatitis B vaccine — developed to prevent hepatitis — has had the effect of protecting against liver cancer.