Accessibility links
Presidential Campaign Takes Darker Tone The presidential race is getting more aggressive, with attack ads and charges flying in both directions. While Sarah Palin says Barack Obama "pals around" with terrorists, the Obama campaign is calling John McCain "out of touch." 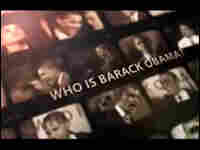 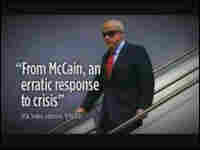 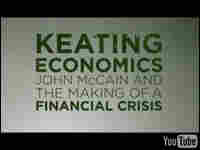 The presidential race is getting more aggressive, with attack ads and charges flying in both directions. While Sarah Palin says Barack Obama "pals around" with terrorists, the Obama campaign is calling John McCain "erratic" and "out of touch."

Monday in Clearwater, Fla., Alaska Gov. Sarah Palin, the GOP nominee for vice president, spoke for the second time in two days about Obama's relationship with William Ayers. A former leader of the Weather Underground, Ayers planted bombs in the 1960s and says he has no regrets about it.

"Barack Obama said Ayers was just someone in the neighborhood," Palin said. "But that's less than truthful. His own top adviser said they were, quote, 'certainly friendly.' In fact, Obama held one of the first meetings of his political career in Bill Ayers' home. And they've worked together on various projects in Chicago."

Ayers and Obama did serve on a nonprofit board together, and while it is true that the senator has minimized his relationship with Ayers, it's also true that McCain's presidential campaign exaggerates the connection between the men.

Obama is also using guilt-by-association attacks. The Democrat's presidential campaign has run ads tying McCain to Rush Limbaugh, corporate lobbyists and, in a new Web video, to the villain in the savings and loan scandal of the 1980s, Charles Keating.

Meanwhile on Monday, McCain introduced an ad called "Dangerous," which asks, "Who is Barack Obama?" and calls him "dishonorable."

Obama has attacked his Republican rival for not knowing how to use a computer and for shooting craps with lobbyists. An Obama ad titled "This Year" calls McCain "erratic in crisis" and "out of touch on the economy."

The increased negative tone of the campaign is not unexpected or unprecedented, but what was unusual was its advance announcement by McCain aide Greg Strimple in a conference call on Saturday. With the overwhelming focus of voters on the economy and McCain's numbers dropping, Strimple predicted an aggressive final 30 days.

"We're looking at turning the page on this financial crisis and getting back to discussing Mr. Obama's liberal, aggressively liberal record, and how he will be too risky for most Americans," Strimple said.

It's a truism of politics that voters always say they hate negative attacks, but politicians keep on using them because they claim they work. This year, however, could be different. Voters may be angry enough at Washington to reject anything that doesn't address their No. 1 concern: the economic crisis.

"There's plenty of negativity to go around," said Whit Ayres, a Republican pollster.

Ayres said currently McCain bears the burden in the race, because Obama has a statistically significant lead — that is, his lead is outside the margin of error nationally and in many key battleground states.

"Obama is ahead, and the candidate in second place tends to run relatively more negative ads," Ayres said.

According to the University of Wisconsin Advertising Project, in mid-September, Obama was running a higher percentage of negative ads. As of Monday, that has changed.

Ayres said voters should expect more of this kind of attack because, in his view, Charles Keating and Bill Ayers are fair game, as is Obama's relationship with the Rev. Jeremiah Wright.

"I think our associations are a window into our values," he said. "If John McCain liked to hang around Ku Klux Klansmen, and if his church had given a lifetime achievement award to the racist David Duke, we would all think those are perfectly legitimate areas of inquiry."

Regardless of whether voters agree that certain lines of attack are appropriate, they can expect more negative campaigning in the remaining 28 days of the race.