Accessibility links
Hanggai: Chinese Punk Looks To The Past Modern Chinese music is most famous for sappy Canto-pop love songs. But on the mainland, young Chinese musicians are innovating and taking risks with ancient music forms such as throat singing. Former punk singer Ilchi is now a force in the Mongolian folk-music revival with his band Hanggai.

Listen
Hanggai: Chinese Punk Looks To The Past

My Banjo and I 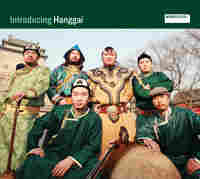 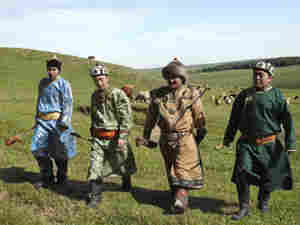 Ilchi (second from left) started the band Hanggai when he realized that the ancient music of Inner Mongolia was in danger being lost forever. Courtesy of the artist hide caption

Modern Chinese music is most famous for sappy Canto-pop love songs. But on the mainland, young Chinese musicians are innovating — and taking risks — with ancient music forms.

The otherworldly sound of throat singing echoes through a small Beijing cafe. Singer Ilchi is producing two sounds at the same time. Just 28, he's already undergone a musical odyssey. Once the leader of the punk band T9, he raged in profanity-laden songs about the frustration of modern life. But his direction changed, and he now serves as one of the leading forces pushing a folk-music revival.

"I felt we modern people need to understand more about our past," Ilchi says.

For Ilchi, that means a pilgrimage into his own past. An ethnic Mongolian, he was born in Inner Mongolia, which is part of China. But he moved with his family to Beijing at the age of 12. Three years ago, on a journey of musical self-exploration, he returned to Inner Mongolia. There, he learned the traditional art of throat singing, and searched for old folk songs in danger of being lost. He started to write his own music for his band Hanggai, including a song about his tobshuur, a two-stringed Mongolian banjo.

"This song is about my beloved banjo, which follows my emotions," Ilchi says. "It's like a horse, which knows which way you want to go on the grasslands. I want to devote my life, and my banjo, to celebrate the beauty of my beloved Mongolian soil and my old home."

With the beat evoking horse hooves thundering over the grasslands, Hanggai's music hearkens back to the nomad's way of life. That's disappearing quickly with rapid urbanization and modernization, and as desertification encroaches upon the once-massive grasslands. The music critic for the China Daily, Mu Qian, has been following Ilchi's musical odyssey.

"He's trying to find back his cultural identity," Qian says. "It's becoming more and more difficult to do so, because traditions are disappearing. It's the same everywhere in the world, but probably especially so in China, because China is changing very fast."

What makes Hanggai stand out is its Mongolian roots, and the fact that its members sing in Mongolian, which treads into politically sensitive territory. Nowadays, less than 20 percent of the population of Inner Mongolia is Mongolian; most are Han Chinese. And Ilchi doesn't shy away from explaining the ways that that Chinese influence has changed life.

"Most of our people have moved away from the old way of life," Ilchi says. "After moving to the cities, many of us have gradually been subjected to a very strong cultural invasion by an oppressive culture. So this traditional music has completely lost its space."

Some of Hanggai's songs demonstrate just how fragile that culture is. One is sung in the Mongolian equivalent of Chaucerian English, a dialect so ancient even the singer who taught the band the words couldn't remember what they meant. Despite the cultural toll, singer Ilchi says that the sinicization of ethnic Mongolians is inevitable.

"Everyone surrounding you speaks Chinese," Ilchi says. "No one speaks Mongolian. If you don't speak Chinese, you can't survive. It's unavoidable."

Ilchi's musical explorations also expose the contradictions involved in rediscovering cultural identity in modern China: He's an ethnic Mongolian who had to relearn the language to sing in it, and he's singing about a fast-disappearing way of life he's never really lived himself. Even so, Robin Haller, who co-produced the band's debut album, says he fell in love with Hanggai's honesty.

Many bands or musicians think about how to sell the most records, or get on television, but there's something quixotic and romantic about the band and how it goes about doing what it does.

Hanggai's new album ends with its party piece, "The Drinking Song." In order to gain the proper alcohol-sozzled atmosphere, part of the recording was made after the band had been on a pub crawl.

"Alcohol in a bottle is very docile, like a little sheep," Ilchi says. "But in your stomach, it's like a tiger."

With those tigers roaring in their bellies, Hanggai's members sing on. In that act alone, they're trying to roll back the cultural invasion of the Han Chinese.