Accessibility links
Worries About Voter Intimidation Run High Voting advocates are concerned that people could be prevented from voting if they are aggressively questioned by political parties or other voters at the polls Nov. 4. Laws governing this intimidation vary from state to state and are often vague. 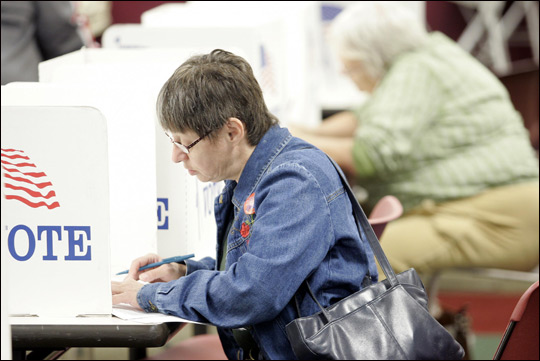 A woman casts her ballot during early voting on Oct. 1 in Toledo, Ohio.

When voters go to the polls in November — or even before then — they could face the possibility of being challenged by local political parties or fellow voters.

Just last week, the Montana Republican Party filed challenges against 6,000 voters who are registered in the state.

In 2004, tens of thousands of voters had their eligibility questioned, often by Republicans who said they were worried about voter fraud.

Now, Democrats have raised concerns that such challenges are being used to intimidate legitimate voters.

Minnesota Secretary of State Mark Ritchie recalls that four years ago, Republican challengers were brought into his state from Texas and Washington, D.C., to watch the polls. He said some questioning of voters got so contentious that fights broke out and the police were called.

"Verbal challenges we found were both designed to be abusive and discourage other voters in the line who didn't want to go through that kind of verbal abuse," he said. "And also, they were designed to slow the movement of the line to discourage voting."

Now the state has a new law. Only residents can challenge another voter. The challenges have to be written down, and they must be based on direct, personal knowledge that, for example, someone doesn't live where he says he does.

Ritchie says he wants to stop ineligible people from casting ballots. "But we do not want the process of challenging to be kind of a backdoor way of preventing people from voting," he said.

Democrats are suing to prevent Michigan Republicans from using home foreclosure lists to question the eligibility of voters — even though Republicans have insisted repeatedly they have no plans to do so.

Republicans say they will be vigilant this year to protect against voter fraud. Last week, the Montana GOP challenged thousands of voters after comparing their names against change-of-address forms indicating that the individuals had moved.

"There's a large concern here, I think, among most Montanans," says Bridger Pierce, the state Republican Party's communications director. "Is our process fair? Is everything that's being done being done legally? I mean, when I go to the polls and I vote for my candidate, is there somebody who's illegally voting on the other side of the issue for the other candidate?"

The questioned voters are being notified, but how the challenges will be resolved is unclear. That's a big problem, according to voting rights advocates.

Laws vary from state to state and are often vague. In 2004, Ohio Republicans drew up a list of 35,000 voters whom they planned to challenge, based on letters sent to voters' homes and returned as undeliverable — a process known as caging.

In the end, the challenges were blocked, but the incident unnerved a lot of people. Now, partisan challengers are no longer allowed in Ohio polling places, and returned mail alone can't be used to cancel a registration.

"Ohio needs to be singled out, I think, as a place that had this horrendous experience and actually took some proactive, not perfect, but very good steps to try and make sure that didn't happen again," said Tova Wang, an election expert with Common Cause.

She says the problem is that Ohio is the exception, rather than the rule.

"In most states, it's pretty easy to challenge someone's right to either be on the voter registration list or challenge them at the polling place," she said.

In Florida, she said, any voter can challenge another by signing an affidavit saying he has reason to believe the person is ineligible, but the evidence required is vague. In many states, it's up to the challenged voters to prove they are eligible by showing identification or other proof.

In Pennsylvania, a challenged voter has to find another voter to vouch for his identity if he wants to cast a regular ballot, according to Wang.

"That means they better have come up with someone who they know, or otherwise they might have a real problem and have to vote by provisional ballot," she added.

Voters should not get too worried about being questioned at the polls. It's not all that common, according to Rick Hasen, an election law expert at Loyola Law School in Los Angeles.

"There's a lot of noise about challenging. It doesn't always materialize," he said.

More often than not, it's the threat of a challenge that can have the greatest impact, as it did in Ohio four years ago.

"Some people had speculated that that was part of the reason that it was mentioned," Hasen said. "It was not that they were going to actually mount these challenges, but that it was really an attempt to get some people worried about long lines at the polls, maybe keep them away from the polls," he said.

And in the current election, that could be crucial.

Voting rights advocates say the smartest thing for eligible voters, especially new ones, is not to be intimidated and to make sure their registrations are in order before they go vote.