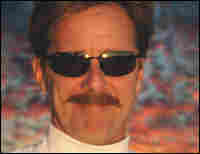 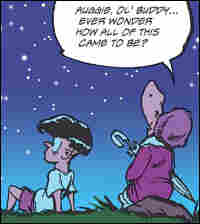 Opus meditates on the meaning of life.
Berkeley Breathed. Dist. by The Washington Post Writers Group 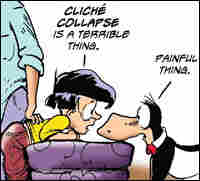 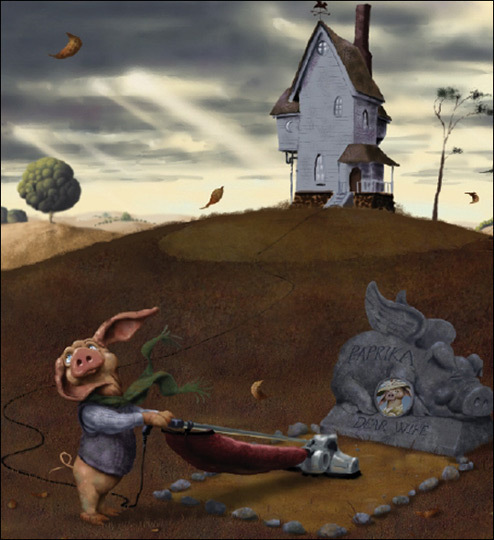 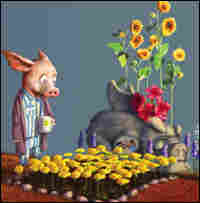 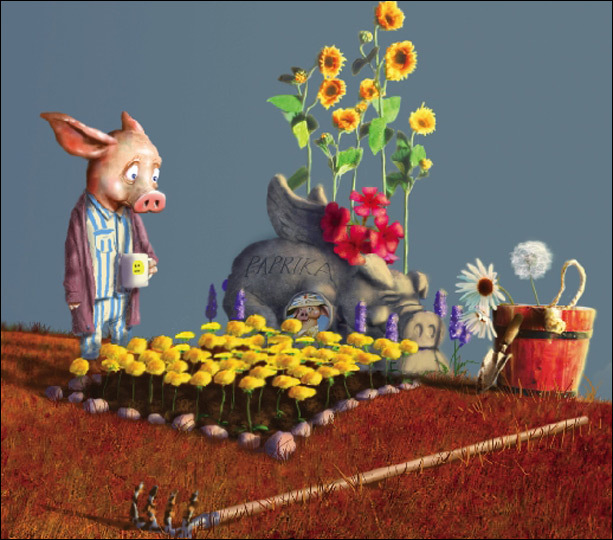 Pickles brings joy — and some amount of frustration — to Pete's life; here, she has decorated Paprika's grave with flowers.

This just in: The bowtie-wearing, tuba-playing, onetime vice presidential candidate on the National Radical Meadow Party ticket is headed for that great comic strip in the sky; cartoonist Berkeley Breathed announced today that he is giving up his Sunday comic strip Opus to focus on children's books instead.

That announcement signals the end of Opus, the charming penguin who has entertained comics readers for nearly 30 years, starting with Bloom County. Though Breathed has retired the character before, this time, he says, he means it.

"I'll be leaving Opus in a way that it should be very clear that this time there's no going back home," says Breathed.

Breathed says that he's not usually sentimental about his characters. Still, he found himself "unrealistically emotional" about drawing the final strip, taking pains to make sure the penguin's last pose was perfect.

Creating Opus for the last time, says Breathed, was like experiencing the passing of his kids' childhood: "As I drew him finally at the very end, I knew that that was the end — [Opus'] childhood was gone. ... It took me a few minutes. I had to pull myself back together again and face the fire."

Though he was sad to part with his longtime character, Breathed says that he has always struggled to maintain the balance between lightness and darkness in his comics — and himself.

"I'm more happy when I'm leaning towards the Walt Disney, but I can't resist the ranting of a Michael Moore," he says.

Breathed worries that the U.S. is heading toward some "difficult times in the next few years — politically," and he says he wanted to leave Opus on a sweeter note — before he could get possibly corrupted.

Breathed describes his new children's book, Pete & Pickles, as an alternate take on the future. "It is telling children that we have a bright future ahead of us, and you have no reason to worry; we are here to comfort you."

The idea for the new book came when Breathed's daughter Sophie, who was 5 at the time, drew a picture of an elephant dropping flowers on a pig's head. The pig was sad, she told her father, but he didn't know he was sad.

"And I thought, 'That is the beginning of a great story,' " says Breathed.

The book morphed into the tale of Pete, a "perfectly practical" but rather lonely pig who meets up with Pickles, a circus elephant with an extraordinary lust for life. When we first meet Pete, he is vacuuming his wife's grave — a fact that Breathed doesn't describe in the text of the book, but "if the parents wish to point that out," he says, "they have it in the subtext."

Pickles uses her wild imagination to upend Pete's quiet life. Together, they take pretend journeys — diving off of Niagara Falls, drifting down the canals in Venice, soaring over Tuscany. The lesson for kids, says Breathed, is that imagination can be used in a way that's almost therapeutic.

In the end, Pickles and Pete face a life-threatening situation involving a house that's filling with water — it's a moment that Breathed says he couldn't help but write:

"I can't resist the great moment of truth. It's what draws me to a story. ... Most children's stories ... are afraid to bring a moment of danger and threat and potential death to a story, which I think is absolutely critical in carrying a child in through the arc that is required for him or her — as long as you show them the other end of that tunnel and the decisions made to get out of it." 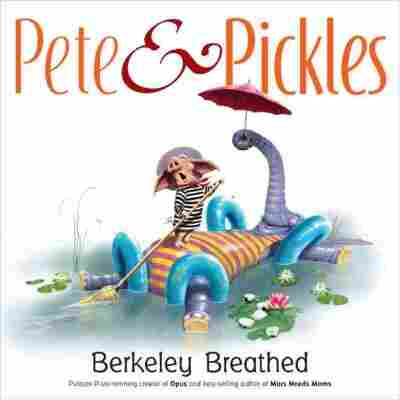