Accessibility links
McCain Hopes To Shine In Town Hall-Style Debate The presidential election is exactly one month away, and Republican John McCain appears to be behind in the polls. Surveys suggest that Democrat Barack Obama is approaching the 270 Electoral College votes needed for victory. The two candidates will meet Tuesday in Nashville, Tenn., for a town hall-style debate.

The presidential election is exactly one month away, and Republican John McCain appears to be behind in the polls. Surveys suggest that Democrat Barack Obama is approaching the 270 Electoral College votes needed for victory. The two candidates will meet Tuesday in Nashville, Tenn., for a town hall-style debate.

Tonight, 100 voters who have yet to settle on a presidential candidate will have a chance to quiz John McCain and Barack Obama. The second of three presidential debates takes place on the campus of Belmont University in Nashville. It'll be a town hall-style format moderated by NBC's Tom Brokaw. NPR's Mara Liasson will be there, and she joins us for a preview. Good morning, Mara.

SHAPIRO: This debate comes just as the campaign is getting more aggressive and more negative. Does that seem about on schedule a month before the election?

LIASSON: Yes, it does. The campaign is getting very, very aggressive. You have Sarah Palin saying that Obama pals around with domestic terrorists. You have Obama running this 13-minute Web video about McCain's connections to the villain of the 1980 savings and loan scandal, Charles Keating. You have Obama running an ad that seems to question McCain's mental stability, saying he's erratic. And you have McCain running an ad that says Obama is dishonorable. So that's what's happening now just at a time when voters are very concerned about the economy, and of course that's been helping Obama.

McCain has said he's going to kind of take the fight to Obama tonight. He knows that one of the remaining weaknesses for Obama in the polls is the question of character. Is he ready to be president? Do you voters identify with his background and values? Obama, on the other hand, has said he might not throw the first punch, but he certainly will throw the last punch. So that is the atmosphere going into tonight.

SHAPIRO: So is that what tonight's debate is going to be about, personal attacks?

LIASSON: Well, it's going to be hard for them to do that tonight. It's very hard to deliver that kind of an attack when you are standing next to your opponent on the stage. It's even harder to deliver that kind of attack when you're standing in front of an audience of voters who are, in effect, your interviewers. Voters like a civilized forum. Don't forget, the town hall-style format favors a completely different type of interaction and performance. It really calls on the candidates to show empathy with the questioners.

Remember the famous Bush-Perot-Clinton town hall-style debate where George H.W. Bush famously looked at his watch. He seemed bored and uninterested. Meanwhile, Clinton was moving to the edge of the stage to connect with an audience member. You know, on the other hand, you know McCain is very good at these formats. He's done hundreds of them. On the other hand, Obama is no slouch either.

SHAPIRO: So who has the tougher job tonight?

LIASSON: Well, McCain has the tougher job because polls show him behind by outside the margin of error. We've had a lot of bad economic news on top of all the other bad economic news we had. We had a very depressing jobs report. The market continues to go down even though the bailout passed. And you know, the old truism in politics is that voters hate negative attacks, but politicians keep on using them because they work. It is possible that maybe this year could be different.

Voters are so focused on their number one burning issue, the economy, that they will not have a lot of patience for attacks that don't address the thing that they care about the most. It's also very hard to make debates a game-changer. We saw that in Mississippi where both candidates turned in a very good performance, and it didn't change the race. The thing that makes a game-changer is when your opponent makes a mistake.

SHAPIRO: Well, how would you describe Obama's task tonight then?

LIASSON: Don't make a mistake. He has to really turn in the kind of performance that he's been turning in. Stay calm and steady and even keeled. Show empathy. Be cool, but not too cool. And I think the Obama campaign feels at this point in the race they just have to continue to be reassuring to convince voters that he is a safe choice as commander in chief. But they certainly have the wind at their back, and he just has to make sure he doesn't mess up.

SHAPIRO: That's NPR national political correspondent Mara Liasson who will be reporting tonight from the second presidential debate in Nashville, Tennessee. And you can hear the debate live on many NPR member stations as well as at npr.org. 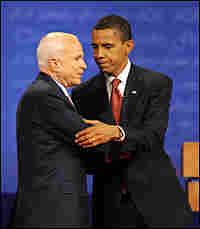 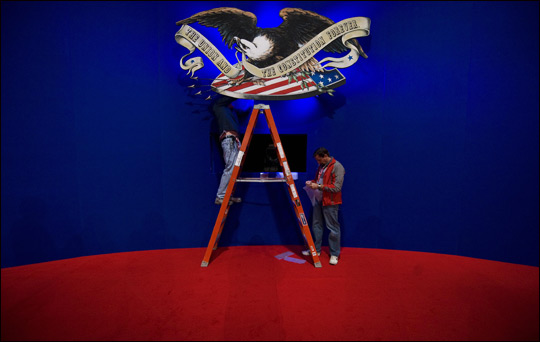 Technicians make final preparations on the stage where the presidential candidates will debate on Oct. 6, 2008, in Nashville, Tenn. at Belmont University.

Sens. John McCain and Barack Obama go into their second presidential debate Tuesday night with a lot to live up to.

They need to reclaim the spotlight from their vice presidential running mates and sharpen the distinctions between them. And they'll have to do it in a format that will require different debating skills.

In their first debate, the two men at the top of the Republican and Democratic tickets drew more than 50 million viewers. But that audience paled in comparison to the more than 70 million people who tuned in to watch the face-off between their running mates, Democratic Sen. Joe Biden of Delaware and Republican Gov. Sarah Palin of Alaska. While those numbers were driven in part by curiosity about how Palin would perform, they drew attention from the main players and their policies.

In the earlier matchup, McCain sought to portray Obama as untested and inexperienced. Obama tried to show McCain as a follower of President Bush who would simply continue the same policies. Although the debate was billed as a discussion of foreign policy and national security — generally considered to be McCain's strong points — those issues were inevitably overshadowed by the financial crisis, a topic where national polls show Obama has an advantage.

Emphasis On The Economy

Unlike the first debate, in which the candidates — despite the urging of moderator Jim Lehrer — seemed to address the cameras more than they did each other, Tuesday night's debate will follow a town-hall format.

Lehrer held tight control of the format, asking the questions and giving each candidate two minutes to answer, followed by a five-minute discussion. The candidates rarely engaged each other. Critics faulted McCain for seeming to ignore his rival's presence altogether at times. Others chastised Obama for seeming too deferential, prefacing several answers by saying that his rival was "absolutely right."

It wasn't exactly high praise, because the Democrat qualified each of those compliments by suggesting that McCain was wrong on the larger issues. But in hindsight, it gave the McCain camp fodder for a campaign ad that made it seem as though Obama had conceded on subject after subject.

By contrast, in Tuesday night's debate at Belmont University in Nashville, the candidates will answer questions posed by members of the audience or sent via the Internet. For that reason, it's likely to focus even more intensely on voters' economic concerns.

Look for the candidates to spar over what measures they would take to support Main Street after the Wall Street bailout. They'll probably also have to address government spending in the face of an ever-yawning deficit.

McCain said in the last debate that he would consider freezing spending for everything but defense, veterans' affairs and entitlement programs. Obama said he believes the economy will need more spending on infrastructure, and that programs such as earlier childhood education are currently underfunded.

Regardless of the questions asked, both candidates will likely bring up their tax plans. Obama likes to link McCain's tax-cut plan to the Bush administration's tax breaks for wealthier Americans. Obama says his plan closes tax loopholes for big corporations but reduces taxes for the 95 percent of Americans who make less than $250,000 per year. McCain says his proposals will create jobs, but his way of doing that involves cutting corporate income taxes, which would mainly benefit better-off people who own stocks.

As moderator, NBC newsman Tom Brokaw will give each candidate two minutes to respond to each question, followed by a minute for further discussion.

The format may not allow the same in-depth answers as in the first debate, but it could make for a wider-ranging discussion. The vice presidential debate was praised for being fast moving, with Palin and Biden responding under similar time constraints.

McCain favors the more casual town-hall format, where he tends to perform better than in his stump speeches. His campaign called on Obama to hold 10 joint town-hall meetings over the summer, but Obama declined, saying three debates would be enough.

The audience for Tuesday night's debate will include 80 to 120 voters from the Nashville area, identified as "undecided" by surveyors from the Gallup Organization.

In the less than two weeks since McCain and Obama had their first debate, the electoral map has shifted, largely in Obama's favor. On Thursday, just before the vice presidential debate, McCain's campaign decided to cut potential losses in Michigan, dropping TV ads and moving staff to more competitive states.

The economic crisis has strengthened Obama in some battleground states, including Colorado, Missouri and Florida — states that George W. Bush won in 2004. The latest Fox News/Rasmussen Reports poll shows Obama holding on to a narrow lead in Virginia, and McCain staying slightly ahead in Ohio.

Some McCain staffers who were pulled off the effort in Michigan may be sent to shore up the campaign's efforts in Pennsylvania, Wisconsin, Minnesota and New Hampshire.