Accessibility links
Federal Reserve Tries To Get Credit Moving Again The government announced Tuesday that it plans to buy huge amounts of short-term debts from companies. The Fed will buy "commercial paper," a short-term financing mechanism that many companies use to finance their day-to-day operations, like meeting payroll or purchasing supplies.

The government announced Tuesday that it plans to buy huge amounts of short-term debt from companies. The Fed will buy "commercial paper," a short-term financing mechanism that many companies use to finance their day-to-day operations, like meeting payroll or purchasing supplies. NPR's Adam Davidson tells Steve Inskeep why the Fed thought it needed to step in again.

Mitchell Hartman explains the risks of commercial paper to Alex Chadwick on 'Day to Day.' 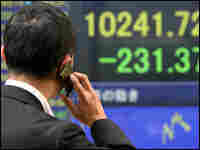 A man looks at an electronic board displaying the sharp drop in stock prices in Tokyo, on Tuesday. Japan's benchmark Nikkei 225 index erased some of its early losses to close down 3 percent. Kiyoshi Ota/Getty Images hide caption 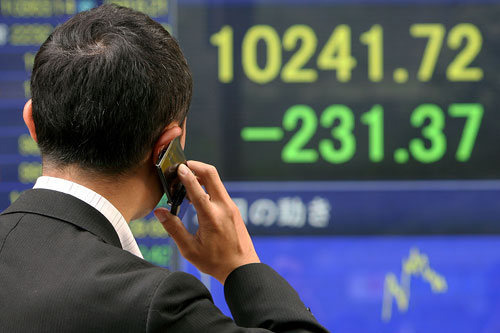 A man looks at an electronic board displaying the sharp drop in stock prices in Tokyo, on Tuesday. Japan's benchmark Nikkei 225 index erased some of its early losses to close down 3 percent.

In a sign that the central bank is growing increasingly worried about the U.S. economy buckling under the strain of the latest financial crisis, Federal Reserve Chairman Ben Bernanke offered new hope on Tuesday. In addition to hinting at a possible rate cut, he also announced that the Fed would start buying unsecured commercial paper to take the bite out of the current credit crunch.

The announcements did little to buoy investors. The Dow Jones industrial average tumbled, ending the day down 508 points, to 9,447, another 5 percent drop.

"The combination of the incoming data and recent financial developments suggests that the outlook for economic growth has worsened and that the downside risks to growth have increased," Bernanke told the National Association for Business Economics in a speech Tuesday afternoon. "In light of these developments, the Federal Reserve will need to consider whether the current stance of policy remains appropriate."

Until this summer, consumer spending was still fairly robust and exports were keeping the economy humming in spite of the slumping housing market and the early stirrings of problems in the credit markets. But all that seemed to change come September. Nonfarm payrolls dropped by 159,000 last month. Factory orders dropped 4 percent in August, the largest amount in nearly two years. Bernanke said that all the uncertainty had "begun to weigh more heavily on investment spending as well."

The Federal Open Market Committee, which sets the federal funds rate (the overnight rate at which banks lend to each other), is scheduled to meet Oct. 28-29. Right now the fed funds rate is at 2 percent. If the Fed decides to slash it, that would be a reversal. Back in June, the Fed stopped its aggressive rate-cutting campaign out of concern that inflation was lurking. Then the financial crisis hit, causing the economic picture to become decidedly darker. Many economists believe that the economy is either on the precipice of a recession or has already slipped into one.

As the Fed chief was speaking Tuesday afternoon, the stock market took a more than 333-point drive to 9,615.52 — partly out of concern that the economic news is going to get worse before it gets better. The Dow plunged 800 points at one point Monday, ending below the 10,000 mark for the first time in four years. The Dow is down more than 30 percent from its all-time high about this time last year.

Tuesday began with the Fed announcing before the markets opened that it would start buying commercial paper to ease pressure on Main Street businesses that have had trouble borrowing money. Under normal circumstances, companies use commercial paper as a matter of course to fund their day-to-day operations — it's like a short-term IOU that helps them manage their cash flow. The drum-tight credit market was making even this routine part of doing business very difficult. Typically, corporations sell their commercial paper to money market funds. But with the current panic, money market funds aren't buying. So the Fed saw fit to step in.

The Fed said the new program was "necessary to prevent substantial disruptions to the financial markets and the economy." The Fed didn't say how big the program would be but did say the U.S. Treasury would "make a special deposit" at the New York Fed to kick-start the new lending facility. The central bank actually created a new entity, called the Commercial Paper Funding Facility, to buy all this debt.

Doubts About The Bailout

The Fed's action comes at a time when financial markets around the world are reeling. The stock markets in Russia and Brazil suspended trading Monday because share prices had fallen so fast. Europe and Japan are also struggling.

The declines suggest that many investors don't think the $700 billion U.S. bailout will be the silver bullet they had been hoping for. Now there is a growing sense that the rescue package won't prevent the world from slipping into a painful global recession.

"In Europe they promised to act together and they have acted separately," Philip Coggan, a columnist for the Financial Times, told NPR's Ari Shapiro Tuesday morning. "The Icelandic prime minister said overnight that it is every country for itself, and that is the impression that all the countries are giving."

President Bush has been calling key European allies in a bid to get them to join the U.S. effort to stabilize the global economy, White House officials said.

"We're the most dynamic economy in the world and we have been in tough times before," the president said in Chantilly, Va., Tuesday afternoon. "The immediate challenge facing the economy is a lack of credit. ... People just are not lending. When credit runs dry in one part of our economy, there is a chain reaction."

Uncharted Territory For The Fed

It is the concern about that chain reaction that spurred the Fed to do more. The central bank has never bought unsecured commercial paper before. Traditionally, when the Fed lends to banks and other financial institutions, they have collateral to back up those loans. In this case, if a company doesn't put up collateral to back up the commercial paper, the Fed said it will charge the company a fee.

Also new is that the Fed has expanded the kinds of companies that can come to it for help: Now it isn't just financial institutions but instead will be bread-and-butter companies like General Electric or Caterpillar. Financial arms of corporations are big users of commercial paper. Among other things, the Fed's move is expected to help car dealers who have been having trouble securing loans.

The Fed's move is aimed at pumping liquidity into the market in hopes of easing a global credit crunch. The numbers show just how seized up the credit markets have become. In the week ended Oct. 1, the U.S. commercial paper market shrank by almost $100 billion to $1.6 trillion, because banks have started hoarding cash and stopped lending money.

European finance ministers pledged to safeguard bank deposits to make sure there wouldn't be a run on European banks. But the officials stopped short of coming up with a coordinated strategy that would unfreeze the credit markets.

"Unlike the U.S., there is no continentwide Treasury," the Financial Times' Coggan said. "There is no European tax-raising body that can suddenly decide to raise a fund, and that's the difficulty in coordination of these 27 countries to try to put something together."

Europe's inability to agree has some observers raising the prospect that massive interest rate cuts will be the global economy's only way out. The European Central Bank's president, Jean-Claude Trichet, hinted at a rate cut last week. Australia's central bank has already cut interest rates by a full percentage point.

"I think they are going to have to throw the book at it," Coggan said. "I think perhaps a lot of countries will have to cut interest rates all at once and accompany that with bailout plans with individual banks. And again, there are reports emerging today that Britain is doing that with some of its banks. So they will have to introduce a whole range of measures all at once in the hope that breaks the cycle of panic that has currently set in."