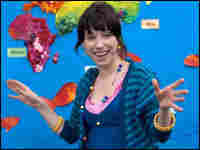 We're so happy you're so happy: Sally Hawkins' Poppy grins and bears things that would make most of us snarl. Miramax Films hide caption 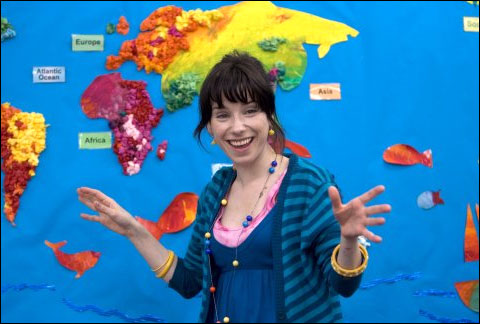 We're so happy you're so happy: Sally Hawkins' Poppy grins and bears things that would make most of us snarl.

'What Brings You Here?' 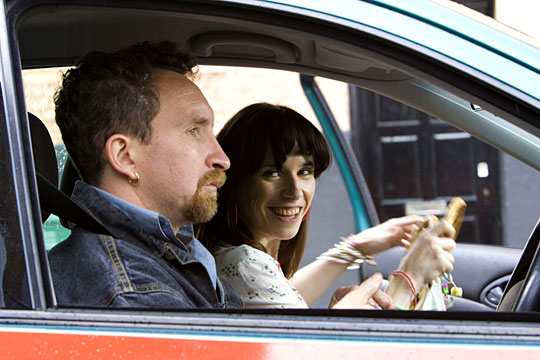 If Poppy's smile doesn't grab you in Happy-Go-Lucky, her giggle will.

As played by a bubbly Sally Hawkins (she starred recently in a British TV remake of Jane Austen's Persuasion), this North London schoolteacher is so bright and cheery as to be downright irresistible, even if the title suggests she must be riding for a fall.

Actually, the title does that only in combination with the director's name: Happy-Go-Lucky was made by Mike Leigh, the Brit King of Bleak, whose career consists in large part of bringing a humane warmth to stories that would otherwise make audiences cringe — tales of abortion, class divisions, crumbling marriages, rape.

Poppy, though, is upbeat — so relentlessly upbeat that it won't take long before you're wondering just how the director plans to wipe the smile off her face. As the opening credits end, he has her bicycle stolen, but that doesn't do it. "Didn't get a chance to say goodbye," she burbles, eyes clouding slightly but smile intact.

And that's hardly the biggest of the troubles Leigh throws Poppy's way. Confronted by a racist, bitter driving instructor with terrible teeth (Eddie Marsan), she laughs, flirts and chirps until he's all but climbing out of the car window. Hurting her back on a trampoline (she'd wondered what it might be like to fly), she's delighted to meet a kindly chiropractor. Encountering a homeless man in an urban wasteland, she gleans life lessons while giving him a bit of companionship.

And strangely, considering Leigh's usual insistence on the earthiness of his characters, she's not an idiot; she's just upbeat. The director might easily have made her a naively Candide-like figure, or a treacly Pollyannaish one.

Instead he makes her playful — she beams throughout a flamenco class, even as the instructor explains that the dance is about pain — which has the effect of making the movie around her feel decent and affirmative rather than cloying or melodramatic.

That said, by the time she's encouraging an angry, bullying child in her classroom, and beaming broadly when a handsome social worker gets called in to help, it's entirely reasonable to expect something a little more bracing to happen to Poppy. And it does: not a comeuppance exactly, but a moment in which she's brought firmly down to earth.

Facing the real world, happily, is made somewhat easier by the fact that it's a world made brighter by her optimism. (Recommended).