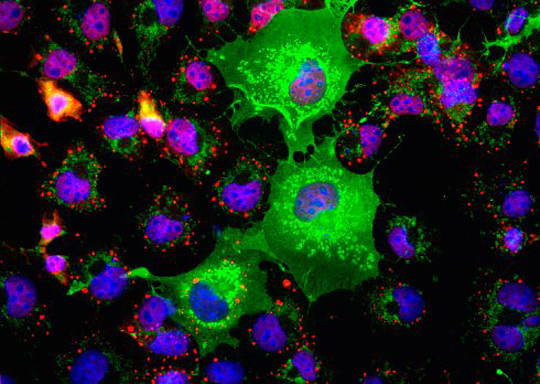 Fluorescent "tags" reveal how some cancer cells (blue) are making more of a specific protein (green).

The 2008 Nobel Prize in Chemistry

Three scientists who created a method for unveiling the previously invisible machinery inside living cells, using a protein that glows in the dark, won the 2008 Nobel Prize for chemistry.

The winners are Osamu Shimomura, a Japanese citizen who works at the Marine Biological Laboratory in Woods Hole, Mass.; Martin Chalfie of New York's Columbia University; and Roger Tsien of the University of California, San Diego.

In the 1960s, Shimomura isolated what became known as the "green fluorescent protein," or GFP, from a kind of jellyfish. This protein glows bright green when it is exposed to ultraviolet light.

Thirty years later, when scientists developed tools for cutting and splicing genes, Chalfie took the gene that produces this glowing substance and inserted it into cells of other living creatures, starting with bacteria. He was able to use this inserted gene as an easily detected tag, or visual marker. By attaching it to other genes, he was able to make specific proteins inside living cells glow green under ultraviolet light .

Scientists cannot normally observe the complex dance of proteins that forms the basis of life, but GFP opened up a previously invisible world, revealing a wealth of detail about where, and how, those proteins work.

Tsien expanded the technique, creating an entire toolbox of glowing genes. He tinkered with the GFP gene, creating new versions that glow cyan, blue and yellow. This allows researchers to tag different proteins with distinctive colors and observe their interactions.