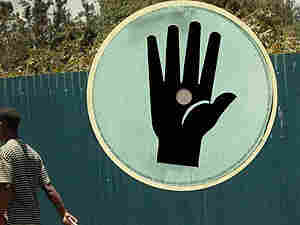 On A Town Called Addis, Ethiopian music and dub reggae bring each other to life. hide caption

Jamaica and Ethiopia have long-standing cultural ties. Rastafarians believe that the late Ethiopian emperor Haile Selassie was actually the second coming of the Messiah, and since the 1970s, reggae musicians have celebrated Selassie (and Ethiopia) in song. But no musician had thought to actually join reggae and Ethiopian music, until now.

That musician is English music producer Nick Page, a.k.a. Dub Colossus. Page is a dub reggae fanatic, and as a member of bands such as TransGlobal Underground, he's fused different musical styles for years. It took a friend a year of pleading to convince Page to visit Ethiopia. Much to Page's surprise, though, that weeklong trip to Addis Ababa turned into a two-year musical endeavor, culminating in the release of the album A Town Called Addis.

A Town Called Addis is a rare album. Originally a solo project by a lone producer, it literally took a village to create it. You can hear the dialogue and play in every song. Dub Colossus put his name on the album, but in fact two colossi meet on A Town Called Addis: Jamaica's weighty reggae and Ethiopia's thousand-year folk tradition. Rather than wrestling with each other, they actually find a way to dance.