Accessibility links
McCain Proposes $300 Billion Mortgage Buyout Plan In Tuesday night's debate, John McCain proposed a plan to help millions of people around the country facing foreclosure. It would essentially be a $300 billion rescue fund for homeowners, although it is unclear exactly where this money would come from. 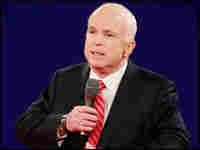 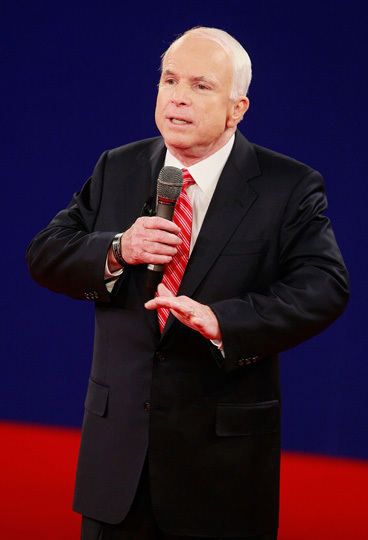 In Tuesday night's debate, Sen. John McCain proposed a plan to help millions of people around the country facing foreclosure by ordering the Treasury secretary to purchase and renegotiate faulty home loans.

Politicians from both parties have been talking about the possibility that the $700 billion bailout plan passed by Congress last week may not do anything to address the root of the current financial crisis — that is, the people who can't pay their loans and are losing their homes. McCain is now making this a front-and-center issue in his presidential campaign.

"As president of the United States, I would order the secretary of the Treasury to immediately buy up the bad home loans in America, renegotiate at the new value — diminished value — of their homes, and let people make their payments and stay in their homes," McCain said.

During the debate, McCain staffers released some more details. The plan is aimed at homeowners who owe more than their houses are worth or who are otherwise in danger of foreclosure. The government would use Fannie Mae, Freddie Mac and private mortgage brokers to pay off the troubled loans and refinance the homeowners, making their payments more affordable.

Although this would cost the government several hundred billion dollars, the McCain campaign said it would help millions of people while propping up the housing market.

"Is it expensive? Yes," McCain said at the debate. "But we all know, my friends, until we stabilize home values in America, we're never going to start turning around and creating jobs and fixing our economy. And we've got to give some trust and confidence back to America."

In general, McCain's is not a new idea, although it has been gaining traction recently. Liberal and conservative economists alike have been calling for something along these lines.

Last week, Democratic Rep. Rush Holt of New Jersey called for the government to take similar action. He said that during the Great Depression, the government set up a federal corporation to restructure loans for homeowners.

"The Home Owners' Loan Corp. is a model that could be used today," Holt said. "This was a large-scale program, and it rescued more than a million homeowners' mortgages at that time."

The fact that this kind of aggressive proposal is emerging in the presidential race is encouraging to some people who have been calling for stronger measures like these.

"There's been a lot of talk but not enough action," said Robert Shiller, a housing economist at Yale University. "We're still seeing 10,000 foreclosures a day."

Shiller said he is intrigued by McCain's plan, even though the details are still fuzzy.

McCain's plan looks similar to part of a proposal from Columbia University economist Chris Mayer. But Mayer said McCain's plan doesn't go far enough. Mayer has been calling for the government to offer 5 percent interest rates and 30-year fixed-rate loans to all Americans. He says that would give the housing market the shot in the arm it really needs.

"We are facing a problem where, if house prices keep falling, it really could have very devastating consequences," Mayer said. "That really requires drastic action on the part of the government that it's in a position to do, but that we haven't seen so far."

There are also other concerns and questions about the McCain plan: Who would be eligible? How would he pay for it? Would the government pay face value for these loans? Alan Blinder, a Princeton economist, said he doesn't want to see the government overpay if it buys problem loans.

"They're not worth face value, and this would hand a huge bill to the taxpayer," Blinder said.

Since McCain announced his plan, the Obama campaign has been raising this concern as well. A spokesperson said Obama is supportive of efforts to have the government restructure loans for struggling homeowners. But upon seeing the details that McCain has released thus far, the Obama camp said the McCain proposal would be a costly giveaway to the mortgage industry.