Accessibility links
Spain's Banco Santander Weathers Crisis — For Now Spain's Banco Santander remains a robust international financial institution. Strong lending principles and local retail banking led to a $6.5 billion profit in the first half of the year. It does face the same threat as all other banks, however — a lack of consumer confidence. 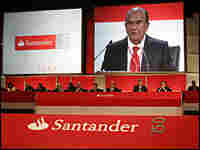 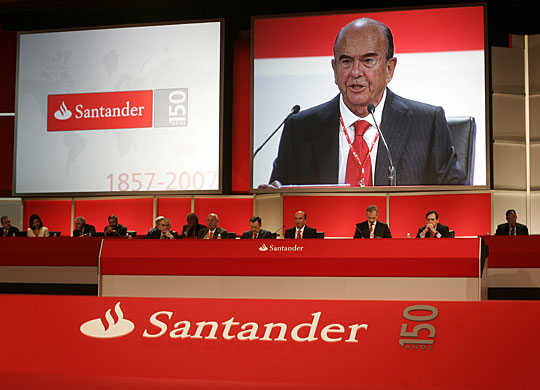 Emilio Botin, chairman of Banco Santander, has a reputation as a shrewd investor.

Spain's banks appear to be immune to the global financial crisis, and one in particular is even taking advantage of it and buying up banks in trouble.

At Banco Santander in the Madrid suburb of Colmenar Viejo, a long line of customers includes senior citizens, a Moroccan immigrant applying for a loan and a local high school teacher, Maria Jesus Escudero.

"We have a lot of confidence in Banco Santander and the way it manages our money," Escudero says.

Escudero claims Spain's banking system is one of the healthiest in the world, and Spanish banks do appear to be in good shape, at least so far. Santander is one of the world's top 10 banks and is the biggest in Spain. In the first half of this year, it made $6.5 billion dollars in profit.

The bank began as a tiny savings institution in the northern Spanish city of Santander. Its chairman, Emilio Botin, is a fourth-generation banker with a reputation as an extremely shrewd investor.

In a videocast to a meeting of international bankers in London this summer, the 74-year-old chairman explained how Santander stayed out of the subprime mess.

"If you don't fully understand an instrument, don't buy it," Botin said. "If you will not buy for yourself a specific product, don't try to sell it. If you don't know very well your customers, don't lend them any money. If you do all these three things, you will be a better banker, my son."

Not only did Santander avoid exotic financial instruments, but its old-fashioned banking style relies on retail banking.

Santander says it has more branches than any other international bank, and there are three in Colmenar Viejo. Santander takes in a lot of cash deposits from all those local customers, and now it is reaping the benefits and buying troubled banks. Just a few weeks ago it snapped up Bradford & Bingley in the U.K. at a bargain-basement price.

Analysts are praising the role that Spain's regulators have played. After a financial crisis in the 1970s and another in the 1990s, Spain's central bank encouraged lenders to build up reserves and warned them away from high-risk assets.

Currently 70 percent of Santander's loans are backed by its own customers' deposits, but Spanish banks are still feeling the squeeze, says Manuel Romera, a finance professor at Madrid's IE business school.

"It's not that Spanish banks are doing well; it's just things are worse for those American and European banks that are in trouble," Romera says. "The priority now is that customers continue having faith in the banking system."

At a jewelry shop around the corner from the bank, customer Juanita Jerena says many of her friends are worried.

And there are signs of trouble — Spain's property market collapse may have been the most drastic in Europe. Experts warn that if customers are not convinced by the bankers' reassurances that all is well, even the Spanish financial system could come tumbling down.