Some feminists have had a hard time accepting Republican vice presidential candidate Sarah Palin as a symbol of women's empowerment. But political science professor Ronnee Schreiber argues that conservatism and feminism are not mutually exclusive ideologies.

In a Sept. 9 commentary for CNN.com, Schreiber wrote that McCain chose Palin as his running mate because he wanted to energize Republican women and bring "undecided women who like the way conservative women speak to them into McCain's camp."

Schreiber is an assistant professor at San Diego State University and the author of Righting Feminism: Conservative Women and American Politics. 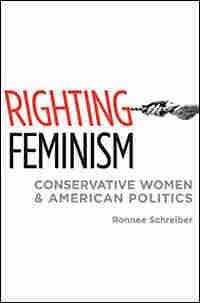 In April 2001, the Independent Women's Forum (IWF) ran a fullpage ad in several campus newspapers, urging students to "Take Back the Campus" from "factually challenged" feminist professors seeking to indoctrinate students into a "cult." In the ad, IWF asserted that feminists had exaggerated the frequency and severity of incidences of violence against women and that feminist accounts of gender differences in wages and gender biases in schools were overstated and often inaccurate. Finally, the ad encouraged students who encountered such accounts of "Ms/information" to report them to IWF for posting on its Web site. IWF caused a stir on several campuses with the publication, garnering the organization national publicity. This was, no doubt, part of the intent of this media-savvy organization.

IWF's agenda in this incident is representative of a significant political battle that has been largely unrecognized by political analysts. As women's political power has increased, so too has a contest among national organizations fighting to represent women's interests in the policymaking process. Although feminists have long dominated the political landscape in terms of numbers and visibility, they are increasingly being challenged by other national organizations—those that are antifeminist and also claim to represent women's interests. These conservative women's groups present a substantial threat to the feminist movement. They are well organized, politically active, and have access to government institutions, political parties, and national media. As these organizations vie with feminists over what women need and desire, they publicly contest definitions of women's interests and influence political debates and policy outcomes. Inattention to comparably sized and situated feminist organizations, such as the National Organization for Women (NOW), would be untenable; yet almost no scholarship exists on national conservative women's organizations. An examination of these national political actors is long overdue.

This book examines the two most visible and prominent conservative women's organizations: Concerned Women for America (CWA) and Independent Women's Forum (IWF). CWA is one of the largest grassroots women's organizations in the country and participates in a host of current political debates. Founded in 1979 to oppose the Equal Rights Amendment, this multi-issue interest group rivals in size and scope its feminist counterpart, NOW. IWF emerged in 1992 through the efforts of women formerly organized to support the nomination of Clarence Thomas to the U.S. Supreme Court. Energized by their work to promote Thomas's appointment, these professional women dedicated themselves to establishing a national and institutional voice for economically conservative women. Featured in a Washington Post story that highlighted the organization's keen ability to get its leaders on the public airwaves, IWF includes associates who have positions in and strong ties to George W. Bush's administration. Among these are founding board member Lynne Cheney, who is the nation's Second Lady, and national advisory board member Elaine Chao, who is the U.S. labor secretary. Given the growing stature of these organizations, it is important to understand their role in American politics. As policymakers take them seriously, both groups work pointedly to undermine feminist policy successes. And, because they are women challenging other women's political views, the media are eager to give them access; controversy generates interest and viewership.

This book highlights the unique position of CWA and IWF as both conservative and women's organizations and explores how this status affects their actions. As conservative and women's organizations, CWA and IWF must behave differently from their male counterparts. Since they claim to be speaking as and for women, they not only aim to mobilize people around conservative politics, but seek to specifically rally women to stand with them. To this end, they organize meetings on college campuses, sponsor prayer groups, train lobbyists, and hold conferences, brown bag lunches, and seminars. Almost always, women are the explicit invitees to these events. In addition, both organizations take as a central goal the promotion of political issues from conservative women's points of view. However, they must also take into account the success of feminism in defining women's policy priorities and agendas. Keeping in mind this political context, questions central to the book are: how do CWA and IWF establish themselves as legitimate representatives of women's interests? How do being conservative and being women's organizations influence the tactics they choose? How do their actions shape the conservative movement and bear upon feminist activism?

Exploration of these questions also brings to light information about how specific conservative ideologies figure into action and underscores organizational distinctions among conservative women's groups. Although both groups formed as women's organizations to challenge feminist activism, they have different constituencies. CWA is a socially conservative interest group, mostly composed of evangelical Protestant women. It is concerned with public and private morality, opposes abortion and civil rights for homosexuals, and advocates prayer in schools. CWA also coalesces with other Christian Right groups that have commanded the attention of politicians and analysts alike. IWF, however, more closely matches the description of an economic conservative group, with its call for individuals' self-sufficiency, limited federal social programs and business regulations, and increased private sector involvement in the provision of public goods and services. With its libertarian leanings, it stays out of debates over issues like abortion. These contrasting positions illuminate the relative influence of CWA and IWF's divergent ideologies. However, there are moments when CWA and IWF express comparable beliefs and goals and behave in similar ways; therefore, examination of these two distinct organization highlights the fluidity of the ideological boundaries between social and economic conservatives.

CWA AND IWF IN POLITICAL CONTEXT

As other scholars have demonstrated, attention to context matters when trying to understand women's quest for "political standing" or legitimacy. Being both conservative and women's organizations, CWA and IWF exist in a milieu rife with competing values and audiences: feminist activists, the conservative groups with which they coalesce, their members and potential adherents. Each group must speak to its own conservative constituencies and allies, but also appeal to a broader range of women, many of whom have benefited from and support the goals of the feminist movement.

But conservative organizations and activists have either been unsympathetic to many women's issues or have not traditionally taken the helm on the ones central to CWA's and IWF's agendas. And, when conservatives have taken on policies that are of special interest to women, they have often done so in ways that alienate women who may otherwise feel partial to conservative causes. For example, there are many prochoice Republican women who struggle with its party's antiabortion platform. Given this conflict, CWA and IWF must grapple with crafting messages about women's issues that ring true with conservatives and are potentially compelling to a broader range of women. In this way, they are always present as both women's and conservative organizations and reference themselves in terms that incorporate both of these identities.

CWA and IWF not only connect their members and associates to other conservative causes and organizations, but also strive to attract and mobilize women not affiliated with their organizations. Given that feminists have had decades to stake their claims to women's interests and have had a significant impact on women's lives, these advocates must take women's attitudes and feminism's influence into account. Notwithstanding political losses since the 1970s, feminists have greatly transformed the social, economic, and political landscape for women by helping to increase the number of women in public office, changing beliefs about gender roles, and pushing for legislation aimed at improving women's lives. For example, in both the legislative and judicial arenas, feminist accomplishments include Roe v. Wade, which legalized abortion in 1973; the passage of Title IX, which promotes equity for women and girls in federally funded institutions; implementation of the Family and Medical Leave Act of 1993, which guarantees unpaid family leave to new parents and caregivers; and the procurement of significant federal funding for women's health issues, especially breast cancer. CWA and IWF oppose a number of these specific policy achievements, but must acknowledge on some level that many women feel that they have benefited from these efforts. These ardent opponents of feminism are compelled to make sense of their opponents' accomplishments, while simultaneously discrediting them as representatives of women's interests. If they fail to carry out this task, they will lose the ability to reach out to women who do not identify with any women's organization, but who want policy solutions that address the stresses in their lives. Moreover, the organizations must demonstrate why their perspectives differ from and are more credible than those of feminists. This tension must be accounted for when trying to understand the strategies that CWA and IWF employ as they strive to be taken seriously as groups that represent women's interests.