Accessibility links
Multitasking Teens May Be Muddling Their Brains Many teens today bounce between computers, music, cell phones and homework. They might appear superproductive, but science says otherwise: Every time we switch tasks, the brain shuts down connections to key information.

Listen
Multitasking Teens May Be Muddling Their Brains 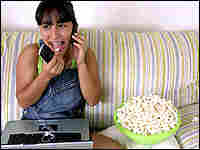 Research shows that when we try to do more at once, performance suffers. iStockphoto.com hide caption

Doing several things at once can feel so productive. But scientists say switching rapidly between tasks can actually slow us down.

Even though modern technology allows people to perform more tasks at the same time, juggling tasks can make our brains lose connections to important information. Which means, in the end, it takes longer because we have to remind our brains what we were working on.

Zach Weinberg, a junior at Bethesda-Chevy Chase High School, sits in front of his computer in his family home in suburban Maryland.

Within the span of seconds, Zach switches between e-mail, iTunes, Facebook, a computer word puzzle game and messaging his buddy online. Somewhere amid the flurry, Zach manages to squeeze in some homework, too.

While he is working on an algebra calculation, an instant message from his buddy Alex Donesky pops up on the screen. They chat about a French assignment for a few minutes, exchanging quips about Robespierre and Napoleon. Then Zach shifts his attention back to math, but not before changing to his favorite band on iTunes.

For the record, Alex and Zach are good students. And obviously they're good multitaskers, too.

Alex's mom, Barbara Donesky, says she's dazzled by the skill her son has developed, and how quickly he can click around on the computer and make things happen.

But she's afraid Alex is losing out on other skills.

"I mean, it's my personal belief that all these things just fragment your ability to concentrate. And I see it in myself, you know, since I've started e-mailing and using the computer very regularly."

Multitasking: 'A Brownout In The Brain'

Scientists say she has reason to be worried — although there's not much data yet on teens.

David Meyer at the University of Michigan has spent the past few decades studying multitasking — mostly in adults.

"For tasks that are at all complicated, no matter how good you have become at multitasking, you're still going to suffer hits against your performance. You will be worse compared to if you were actually concentrating from start to finish on the task," Meyer says.

Multitasking causes a kind of brownout in the brain. Meyer says all the lights go dim because there just isn't enough power to go around.

So, the brain starts shutting things down — things like neural connections to important information.

When Alex clicks on a message, his brain starts losing the connections it was using for his French assignment. The pathway to Robespierre — fading fast. The path to Napoleon, not so clear anymore.

To restore those connections, Meyer says, Alex will have to repeat much of the thought process that created them in the first place.

The technical name for creating, or recreating, these neural pathways is "spreading activation." It involves building connections step by step. Meyer says it's similar to what we do when we free associate.

"I say to you, 'What do you think of when I say the word apple to you?' And you start vibing on apple. 'Oh, apple's a fruit, it fell on Newton's head. Newton was a physicist. He invented the first theory of gravity.' And on and on," Meyer says.

When we're interrupted, re-establishing those connections can take seconds or hours.

"It goes on subconsciously and eventually, if I'm lucky, I get back up to speed with what I was thinking about before," Meyer says.

Zach concedes that multitasking might make him less efficient. But his friend Alex maintains that, in small doses, multitasking can help him stay alert — like when he listens to music and does a math problem at the same time.

"If I have only one thing, I drift off a little bit," Alex says. "But if there's something else going on in the background that I can just sort of block out, I feel like I can concentrate on something more — whereas if I'm only doing one thing, it's harder for me to concentrate."

Scientists say Zach has a point. Studies show it's pretty easy for us to keep music in the background when we focus on something else.

But when something in the background forces itself into your consciousness, you do get distracted. Such as when your computer announces: "You've got mail."

"Everybody does get distracted by it. But most people learn to get used to that distraction and when to say 'no, I've got to work, and I'm not going to give into this,' " Zach says.

Saying no to distractions depends, in part, on being able to control your impulses — something that's not fully developed in a teenager's brain.

And Alex says it's not easy for him. He says it's hard to give your full attention to any one thing when you're used to monitoring a screen full of options.

"You're teaching yourself to give 10 percent to each little icon. And then click away when there's a moment's pause," Alex says.

In fact, Meyer says, our brains can get hooked to where "they literally need a fix of multitasking."

There's not much research on the addictive nature of multitasking. But Meyer likens it to playing video games or skydiving: We all get a buzz from novelty and variety. Of course, when the stakes get higher, multitasking can stress you out.

"The brain areas that you would see light up and the biochemicals, the neurotransmitters that would be getting released would be quite different if I was an air traffic controller trying to land a whole bunch of planes at La Guardia Airport or wherever. I wouldn't be having pleasure then," Meyers says.

For teenagers like Zach and Alex, the experience of multitasking falls somewhere between the rush of skydiving and the anxiety of landing planes. Regardless, Alex says, it's all they know.

"Even for me right now — and I haven't been exposed to it that long — it's already natural to multitask in these ways," he says. "Like your will is, your heart is in that place where you are just wanting to multitask, and you're conditioned to it. That's how you're going to keep going."

Even, he says, when you don't want to.