Accessibility links
Think You Can Be Top Gun? To improve aircraft operator performance, the military have invested a good deal of money into neuroscience and behavioral research. The models and simulations can tell them a lot about human weaknesses in multitasking and how to use technology to improve.

Think You Can Be Top Gun?

Think You Can Be Top Gun? 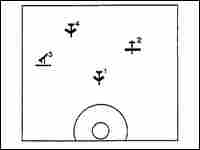 In this tactical decision task, participants had to classify the iconic blips as 'hostile' or 'neutral.' Click to see the full two-image test. Courtesy of David E. Kieras and David E. Meyer, University of Michigan hide caption

In this tactical decision task, participants had to classify iconic blips (left) as 'hostile' or 'neutral.' In the visual-manual tracking test (right), subjects had to keep the crosshairs on the moving target plane while also monitoring the left screen.

For military pilots, multitasking means more than just talking on the phone and typing at the same time.

They must be able to operate million-dollar machinery and keep it targeted on an enemy aircraft while monitoring screens and making tactical decisions about objects on the ground. Every split-second decision has an outcome, and the stakes are high.

"It involves a lot of executive mental processing, cognitive control, allocation of the mind and body's resources for doing these various tasks," said David Meyer, a mathematical psychologist and cognitive scientist at the University of Michigan.

"It's like a computer operating system allocates resources for different programs more or less simultaneously."

The Navy asked Meyer to assess how well operators could handle these tasks and whether changes in equipment could improve their performance.

Meyer and his colleague David Kieras, a professor in the electrical engineering and computer science department, teamed up to build models that measure and predict just what kind of multitasking the human mind and body can handle.

In one test, Meyer and Kieras built a computational model that tested the ability of participants--including some trained pilots-- to simultaneously do two visual-manual tasks. Participants had to monitor and manually respond to two screens.

On the left were the tactical decisions: participants had to classify tiny blips representing potentially dangerous objects as 'hostile' or 'neutral.' On the right-hand screen participants had to keep the crosshairs cursor on an airplane target icon as it moved through space.

Researchers measured both the speed and accuracy with which participants completed these tasks.

The simulations help pinpoint moments when operators are vulnerable to making bad decisions. When test subjects were forced to add a second task on top of one they were already doing, researchers found that their responses in the new task might be slow or inaccurate.

And some of the participants were more adept at balancing the bombardment of mental and physical tasks than others, the researchers found.

The Navy has used data from some of these tests to design equipment that is more conducive to multitasking.