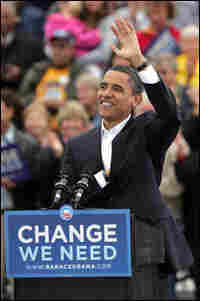 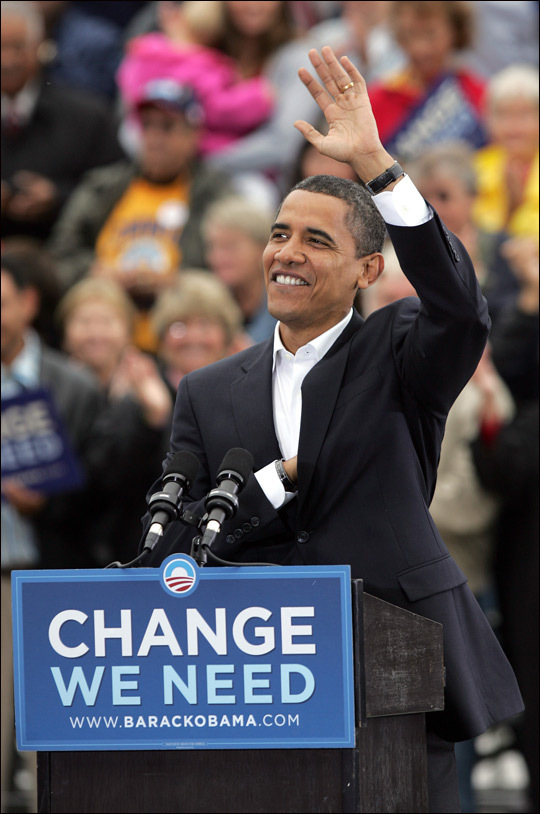 Sen. Barack Obama greets supporters during a campaign rally at the Indiana State Fairgrounds in Indianapolis on Wednesday.

In the battleground states of North Carolina, Missouri and Indiana, polls show that Sen. Barack Obama is gaining ground against his Republican rival, Sen. John McCain. That may be partly because the Obama campaign and the Democratic National Committee so far have outspent McCain and the RNC on TV ads in those states by $14.4 million to $5.7 million.

By comparison, during the 2004 election season, Sen. John Kerry and the DNC spent a total of $8 million in the three states, while President Bush and the RNC dropped $11 million.

Here's how the candidates' spending on TV spots so far this year breaks down in these hotly contested states:

Obama and the DNC have spent about $5.2 million in North Carolina, while McCain has spent just more than $790,000.

Obama and the DNC have spent about $5.2 million in the state, while McCain has spent nearly $4.7 million.

Obama and the DNC have spent almost $4.1 million in Indiana, while McCain and the RNC have spent just under $247,000. By itself, the McCain camp has spent $458.

Tracking and analysis of the campaigns' TV ad spending done by the Campaign Media Analysis Group. 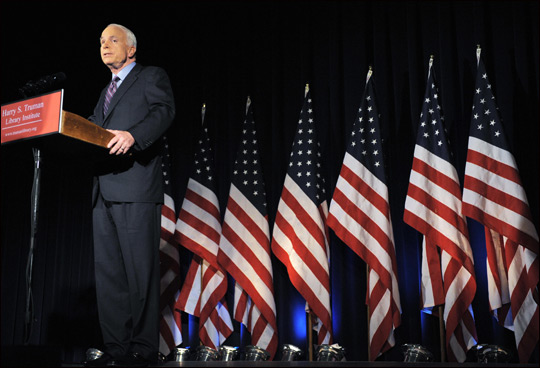 Sen. John McCain speaks about the economy last week at the Truman Library in Independence, Mo.

Sen. Barack Obama on Wednesday brought his Democratic campaign to Indianapolis, the capital of a state that's been about as reliably Republican as they get in presidential elections.

Behind that speech is a media and ground operation that has astonished Indiana politicos. It's a prime example of how this presidential campaign is changing America's political landscape.

In 2004, President Bush and Democratic Sen. John Kerry didn't spend a penny on TV advertising in Indiana. No one doubted that the state would go Republican. But right now, Indiana is barely tilting toward Sen. John McCain. Obama is outspending McCain on television there by a margin of 20-to-1.

Numbers like those, in Indiana and some other once-solid Republican states, seem to confirm Obama's judgment in rejecting public financing. The decision cost the Illinois senator an $84 million grant from the government, meaning he has to keep on raising money. But if he had taken the money — as McCain did — he could not spend anything beyond that. Instead, with a fundraising network that set records throughout the primaries, Obama's financial picture easily eclipses McCain's.

With public financing, McCain has to stretch his $84 million from early September through Election Day.

From now through early November, Obama might exceed that amount, just in television buys. That's the calculation of Evan Tracey, chief operating officer of the Campaign Media Analysis Group, which tracks TV spending.

Television buys and field offices are among the few ways to gauge a campaign's strength in any state. Federal disclosure forms aren't designed to allow the teasing-out of state-by-state spending data. And the campaigns won't say how many paid staffers they deploy.

"We're asking for your vote because we know it's going to come down to the wire," she said, her voice rising to a shout as the crowd cheered. "Here in North Carolina, you can help put us there in D.C. to put the government back on your side."

Again, the money tells the story. Obama's TV spending in North Carolina has already surpassed $5 million. McCain has spent a little over $790,000.

Linda Daves, chairwoman of the North Carolina Republican Party, said Obama wasted his money by going on the air too early. And in her explanation, she got in a subtle dig about his fundraising: "Most wise campaigns — unless they're getting so much money from somewhere they think they'll never run out — most wise campaigns hold their guns until they see the whites of their eyes."

But it's not clear how McCain and the RNC will match Obama's pace in the final three weeks. The RNC has raised far more money than the Democratic National Committee, and it can spend unlimited amounts on "independent expenditure" ads that aren't coordinated with McCain's operation. But at least so far, those ads have not been as plentiful or as effective as anticipated.

Back in Indiana, the state GOP is optimistic about the re-election chances of Republican Gov. Mitch Daniels but glum about the Arizona senator's fortunes. "I hate to keep going back to money," party chairman Murray Clark said. "But I think it's hard for campaign and political veterans to fathom what kind of money the Obama campaign has."

But with Obama already laying out $4 million there, the RNC effort against him seems like a late start, according to state Democratic Party Chairman Dan Parker.

"They've allowed us to lap them for too long," he said. "For so long, they didn't want to admit that Indiana was a battleground state." Parker estimates that Obama has more than 100 paid staff members in the state.

Clark says Obama's troops seem to be focusing on the state's strongest GOP counties, trying to pick off moderate Republicans. Obama also benefits by being a senator from Chicago, practically next door to northwestern Indiana.

Even if Obama's in-your-face strategy doesn't put Indiana in his column on Nov. 4, Tracey of the Campaign Media Analysis Group said, "Every day and every dollar that McCain and the RNC spend in Indiana is a day and a dollar they can't spend in Ohio and Pennsylvania."

Those are traditionally two of the biggest battleground states. It's in states such as Indiana, Missouri and North Carolina where Obama's unfettered dollars are changing the game.