Listen
A Meal Fit For A Candidate: John McCain 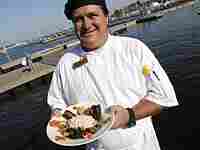 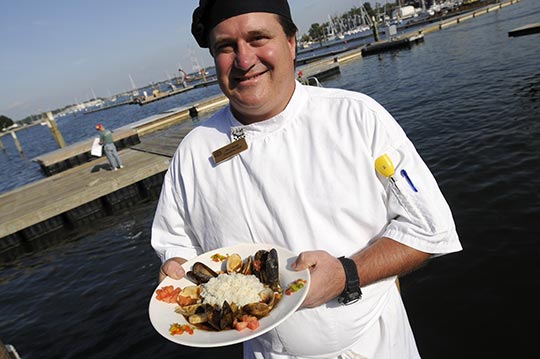 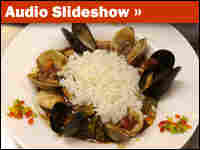 Can we learn anything about the presidential candidates from what they like to eat? As a public service, NPR asked some of their favorite chefs to teach you how to cook the kind of food that graces the candidates' plates when they eat out.

When Sen. John McCain visits his old stomping grounds in Annapolis, Md., he often eats at a restaurant called Pusser's Caribbean Grille. We headed straight to the city — where four generations of the Republican candidate's family have trained at the U.S. Naval Academy — to investigate what he's been eating.

When you stroll into Pusser's, it's easy to see why locals sometimes spot McCain and his son Jack, who attends the Naval Academy, there at lunch or dinner. There are huge models of ships scattered throughout the restaurant, including an aircraft carrier in the lobby. The dining room is festooned with maritime mementos and replicas of leaping fish.

In Annapolis, everybody knows the food at Pusser's. Chef Jim Eriksen offers his recipe for Haitian-Creole seafood gumbo, which generally wins first or second place each year in a regional competition. 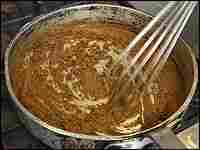 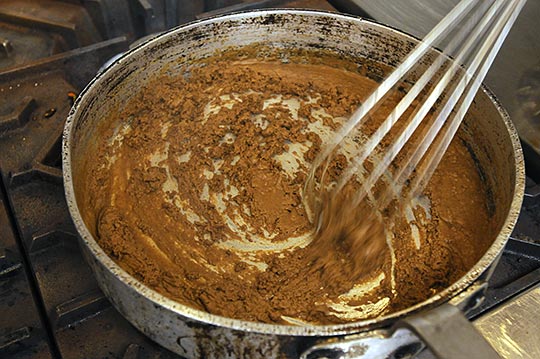 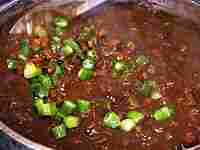 Making the gumbo base. William B. Plowman hide caption 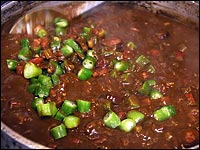 Making the gumbo base. 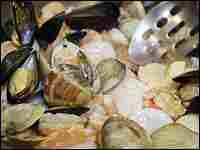 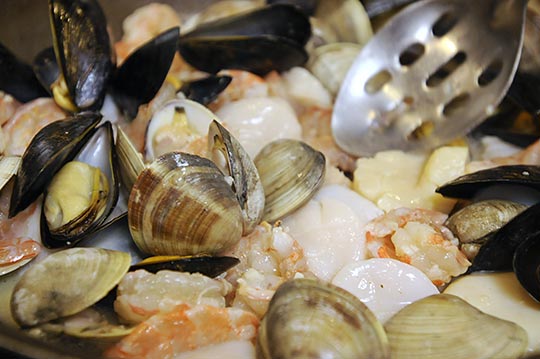 Preparing The Gumbo Base

Like a lot of sauces, it's best to make this the day before and cool overnight in the refrigerator to allow flavors to meld together.

Heat stock while preparing roux. Melt butter in a heavy pan. Add flour and stir in. Stir roux constantly over medium heat until it reaches a uniform chocolate color.

Remove roux from heat and immediately add celery, peppers and onions (the holy trinity of Creole cooking). This will stop the caramelization process. Stir the gumbo file into the roux and add stock. Return the gumbo base to heat and bring to a simmer, stirring a few minutes to let the roux cook.

Bake sliced sausage in a hot oven until browned. Add the sausage, tomatoes and baking soda to the gumbo base and simmer for 20 minutes more. Turn off the heat and add herbs, Tabasco, Worcestershire sauce and okra.

Cooking the seafood separately from the gumbo base allows the shellfish to maintain its own identity.

About an hour before you're ready to eat, reheat the gumbo base until it nearly simmers.

Sauté all the clams and mussels in olive oil, chopped garlic and a splash of white wine in a large skillet or heavy bottomed pan until they just start to pop open. Add the shrimp and scallops, and continue to sauté until they are about done (when they start to lose their transparency).

Add the seafood to the gumbo base and toss to mix. Serve in a single large bowl, using tongs to arrange the clams and mussels along the edge of the dish. Place the rice in the middle of the dish and sprinkle with chopped parsley or finely diced peppers for garnish, if desired.

1. Clean, peel and de-vein shrimp. Put meat aside for the gumbo.

2. Sauté shrimp shells in olive oil over medium heat. After a minute or so, add onion. When the onion begins to soften, add celery. Keep stirring. The shrimp shells will gradually turn red as they cook.

3. When celery and onions look translucent, add water and wine. Bring to a boil then reduce heat. Simmer for about 10 minutes.

4. Use a potato masher or spoon to smash shrimp shells to release more juices.

1. Combine all ingredients except for salt in a soup kettle. Bring to a boil, reduce the heat and cover. Simmer for two hours or longer.

2. Season with salt to taste, if necessary. Strain in a cheesecloth-lined colander. Use cooked meat and vegetables as desired.

3. Cool. Refrigerate and remove hardened fat from top of stock.

4. Refrigerate in covered container for up to 1 week, or freeze in measured portions for easy use for up to 6 months.