Accessibility links
10 Years Later, Shepard Case Haunts Reporters The murder of the openly gay college student ignited a firestorm of media coverage, changing the small town of Laramie, Wyo., forever. But it also had a profound effect on the journalists assigned to the story, several of whom say it changed the course of their lives. 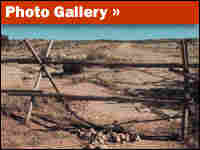 Photos: Looking Back At Matthew Shepard 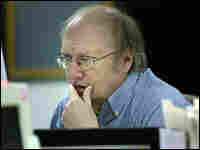 Kerry Drake covered the Matthew Shepard murder for Wyoming's state newspaper, the Casper Star Tribune. He is a character in The Laramie Project, a play that chronicles the drama surrounding the Shepard murder, and acted in a local production of the play as himself. Tim Kupsick/Casper Star-Tribune hide caption 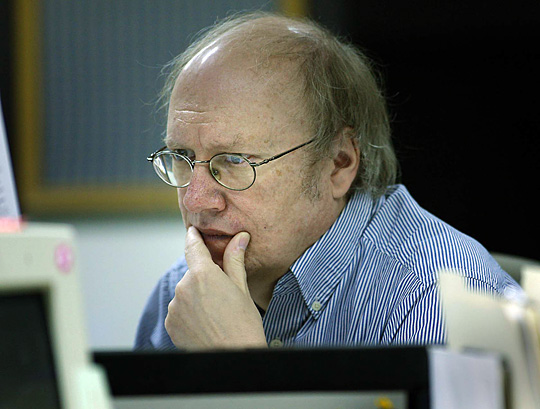 Kerry Drake covered the Matthew Shepard murder for Wyoming's state newspaper, the Casper Star Tribune. He is a character in The Laramie Project, a play that chronicles the drama surrounding the Shepard murder, and acted in a local production of the play as himself.

On the night of Oct. 6, 1998, Matthew Shepard, a gay college student at the University of Wyoming, ran into locals Aaron McKinney and Russell Henderson at a bar in Laramie, Wyo.

The men decided to rob Shepard. They drove him to the edge of town, tied him to a wooden fence and struck him 18 times in the head with a .357-caliber Magnum handgun before leaving him to die. He was found the next day and died in the hospital on Oct. 12.

The murder ignited a firestorm of media coverage for months, changing the small town of Laramie forever. But it also had a profound effect on the journalists assigned to the story: The brutality of the crime haunts many of them to this day, and several of them say it has changed the course of their lives.

Heather Feeney, who reported on the Shepard case for Wyoming Public Radio, says the experience left her depleted. A decade later, she has left not only Wyoming, but also journalism.

"I think I realized rather recently that the experience is the underlying reason why I am not a reporter anymore," she says.

Feeney covered the grisly details of the beating, Shepard's funeral and the court case that followed. But as a reporter, she says, she was unable to stand where she truly wanted — on the side of the victim and the community where she lived.

"I wanted to stand up with these people, with my neighbors and my community," she says. "I wanted to hold a candle, too, and say this violence is not who I am. But that wasn't part of the job, and there was no time to figure all of that out."

When the national media descended onto Laramie, the town felt picked on and misrepresented as the country's newest symbol of hate. Rob Black was a reporter with The Associated Press at the time. He remembers going into a bar for a drink, and when a customer found out he was a reporter, the man tried to fight him. In that moment, Black says, he became a stand-in for all the journalists who had violated Laramie's privacy.

"That really rattled me," he says. "There were times when I truly wondered why I was in this profession. Why am I doing this?"

Black's stories traveled as far as London and Washington, D.C., but he says there are holes in his reporting that will probably never be filled. He still wonders what really happened that night during the long pickup ride to the fence where Shepard was left for dead.

Black isn't the only one grappling with unanswered questions. Kerry Drake, a reporter at the Casper (Wyo.) Star Tribune, says he wrestled with the fact that he was writing so much about a man he never met.

"It's just something that pervades your whole sense of what's right and what's wrong," he says. "There was part of me that had to think, 'Am I doing this story justice?'"

The Shepard story unfolded quickly — too quickly for Drake to realize the impact it had on him emotionally. With time to reflect, he says the story changed everyone's world, "including mine for a long time."

Drake's life is entwined with Shepard's story in another way as well: He is a character in The Laramie Project, a play that chronicles Shepard's death. When the production came to Casper, Drake auditioned for the role of himself. He says he had to.

"Part of it was that I felt I was part of the event," he says. "It just kind of changed my life."

Despite never having acted before, the soft-spoken reporter got the part.

"Even after doing it for 10 shows, there were still scenes I would cry at. And I think I had saved all my emotion from that time and was able to get it out through the play," Drake says.

Drake also admits something else: As a result of the murder, he became biased in his subsequent reporting about the state's proposed hate-crime legislation that followed. He wanted it to pass, and he says Wyoming should be ashamed that it didn't.

After all the time he spent writing about Shepard, Drake says he would have liked to have met the man who changed his life so deeply.