Accessibility links
Moran On Monk: Finding Rhythm And Space Jazz pianist Jason Moran has been praised for his eclectic and distinctive sound. But sometimes, Moran says, he's in danger of becoming inhabited by the brilliant jazz innovator of another time, Thelonious Monk. Here, Moran talks about discovering one of his biggest musical influences. 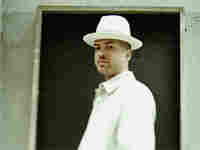 For Jason Moran, Monk's silences were made more dramatic by the color of the notes and by the rules he broke. Paul Brown hide caption 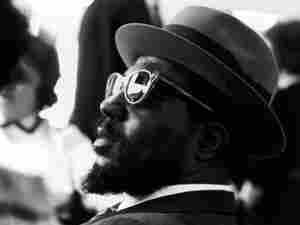 Jason Moran is a leading jazz pianist of this era. Now 32, the Houston-born player has been praised for his eclectic musical brain and his distinctive sound. But sometimes, Moran says, he's in danger of becoming inhabited by a brilliant jazz innovator of another time: Thelonious Monk.

"I play a Monk song, it's like you get possessed," Moran says. "And then you have to break that spell. You have to remind yourself that you are an individual, or that you aren't Thelonious Monk."

Moran started playing the piano as a young boy, but he struggled with it until he discovered Monk at age 13 from a record his father was playing. It was then, he says, that he saw the light.

"It was hearing him play 'Round Midnight,' " Moran says. "It was like that clear moment that happens sometimes in people's lives where... It didn't say this is what you're going to do, but it said you should pay attention to this. It was this open sound. It was totally brand-new. It had rhythm that felt similar to the hip-hop I had been listening to, and so it just drew me in.

"And it also felt — not that it's simple; it's very difficult to play what he plays — but it felt attainable. Because he leaves so much space in the music. You feel like, 'Oh, well, there's not a flurry of notes like Art Tatum or Earl Hines. You know, maybe a child could play a Thelonious Monk song.' "

The issue of the space Monk leaves in his music keeps coming up. As the jazz writer Martin Williams wrote about Monk in the '60s, "If he has no music to make, he doesn't fill out a single bar with faked blowing or rambling." If Monk couldn't say it in his own way, he didn't say it.

"Thelonious really found a different way to make melodies," Moran says. "So his song, simply titled 'Thelonious,' is mostly just one note — that one being B flat. So he colors it, you know, like a kid could.

For Jason Moran, Monk's "less is more" playing was especially evident when Monk performed with other musicians.

"Johnny Griffin would take a nice long solo at the Village Vanguard," Moran says, "and you might hear Monk play a first couple of choruses, and then you wouldn't hear anything for a long time. He would be away from the piano, and he would be dancing. So his accompaniment was also his movement. And conceptually, it's just brilliant. How does one in a band support the other if you don't play anything? Stanley Crouch said he could really orchestrate silence, just as much as he could orchestrate activity."

Monk's silences were made more dramatic, of course, by the power and the color of the notes when Monk did play them. By the rules he broke. Moran points to Monk's treatment of "Just a Gigolo" as such an instance.

"The first chord of 'Just a Gigolo' is an A flat chord," Moran says. "But when Monk plays it, he adds an A natural. Like, that goes against almost every rule in harmony, to just blatantly add the flatted 2 to a major chord. And that kind of precision... Monk had extreme precision with every note he played. It's not off the cuff."

So Moran was thrilled by the simple melodies that, he felt, even a child could play. He was stunned by Monk's colors and fascinated by his rule-breaking harmonies. But it was the rhythm that finally clinched it.

Monk took early-20th-century stride piano — named for its striding left hand, from the lower to the middle register of the keyboard — and elaborated on it for his own time. For his part, Moran received messages for his own time.

"That's the thing that I picked up on the first time I heard him," Moran says. "So even hearing the first song I heard, 'Round Midnight,' it always felt like, you know, it was like, 'Chuck D could rap over this.' I could feel this, and as a teenager I wanted to produce it. I wanted to know how to produce this sound."

What Jason Moran is producing now is a sound completely his own. But he knows that Thelonious Monk's hold on him will last for his whole musical life.

"For me," Moran says, "I get caught when I play his stuff. I'll fall into his rhythms or something, and it's like you have to break yourself out of it. Almost like on your left hand write 'Monk,' and then put a circle around it and then a line through it. Like, 'No Monk.' "

No Monk — until there's another excuse to celebrate Thelonious Monk. Then, Jason Moran is first in line.