Accessibility links
Delayed but Not Denied, a Lost Soul Classic In the mid-'60s, Bob & Gene began to record sweet, harmony-drenched soul tunes for a small New York label. However, despite amassing a dozen or so tracks by the early '70s, the duo's album never made it to market. Now, more than three decades later, it's finally been released.

Delayed but Not Denied, a Lost Soul Classic

Delayed but Not Denied, a Lost Soul Classic 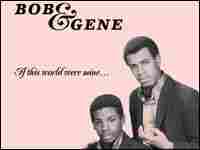 In the mid-'60s, New York teenagers Bobby Nunn and Eugene Coplin began to record a series of sweet, harmony-drenched soul tunes for the Nunn family label, Mo Do Records. However, despite amassing a dozen or so tracks by the early '70s, their album (If This World Were Mine) never made it to market after Mo Do fell on hard financial times.

For three and a half decades, the original tape reels of If This World Were Mine languished in boxes, slowly disintegrating until David Griffiths, an enterprising New York record collector, made contact with Mo Do's William Nunn and discovered that they still existed. After salvaging the tapes, Griffiths and specialty soul label Daptone restored the album and gave it its debut release, 36 years later than intended.

Though the entire album is a masterpiece of sweet soul ballads and the occasional up-tempo R&B cooker, the standout remains the sole single that actually made it into the world: Bob & Gene's first song, "You Gave Me Love," from 1967. The teens' fragile voices and the recording's lo-fi acoustics suggest what a young Delfonics or Smokey Robinson & The Miracles demo might have sounded like.

In fact, the song's arrangement of bears some similarity to The Miracles' "Ooh Baby Baby," even though Bob & Gene lacks the polish of Robinson's smooth vocals. Yet this is precisely what makes the song so endearing: It sounds exactly like what it is: a track cut by a pair of talented-but-amateur teenage singers lucky enough to have access to a family studio and label. "You Gave Me Love" is hardly a novelty song, though; Bob & Gene's youthful harmonies blend together beautifully, and the song drifts dreamily on a bed of piano, organ and bass.

"You Gave Me Love" conveys all the innocence and yearning of a high-school love letter, and whatever it lacks in gloss, it makes up for in heart. For Nunn and Coplin, it must have been crushing to see most of their songs go unheard for so many years. But thankfully, theirs was a dream of sweet soulfulness, delayed but not denied.

Album
If This World Were Mine
Artist
Bob & Gene