Accessibility links
Sales Of Home Safes Climb Amid Financial Turmoil About the same time Lehman Brothers filed for bankruptcy and the stock market began plummeting, one of the nation's leading sellers of safes started to see a sales boost. The company's CEO says he thinks the increase is due to people losing faith in banks. 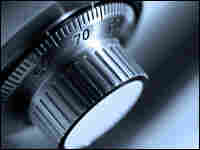 About the same time Lehman Brothers filed for bankruptcy and the Dow Jones industrial average began plummeting last month, one of the nation's leading sellers of safes started to see an increase in sales.

Jim Brush, CEO of Sentry Safe, says some of the retail stores that sell his safes are seeing up to a 70 percent increase over last year.

"Now that's a lot different from earlier this year when our point-of-sale levels were up in the single digits," Brush says.

Since its birth during the Great Depression, the Rochester, N.Y., company has seen sales increase during times of trouble.

Brush says he can't prove it, but he thinks it's fairly obvious the recent spike in sales is due to people's losing faith in banks.

Sandra McFarlane, who heads up marketing for Sentry, says a safe is a more secure place for cash than a mattress or a cookie jar. But she's hoping all these new safe buyers aren't putting their life savings inside.

"We see ourselves as offering protection for valuables to give peace of mind in uncertain times," McFarlane says.

Sentry markets its safes as protection from a short list of what it calls perils. Banks are not among them.

"That's not something we typically would use as a peril. We go with fire, security and water," McFarlane says.

Glenn Miller spends most of his time driving around western New York installing locks and offering security advice. He's been doing it for 30 years. Lately he has been selling a few more safes, too, so he decided to put more advertising in the local newspapers. This isn't just to cash in on growing demand. He says he also wants to educate. He says too many people run into Wal-Mart and grab the first safe they see on display.

"You pick up a safe that weighs 150 pounds, cost ya $150. If someone gets into the house, they can just carry that safe away," Miller says.

Miller says he believes in diversifying his assets. He's keeping some of his money in a safe, but only enough for emergencies.