Accessibility links
Bringing The Banjo From 'Africa To Appalachia' While typically associated with traditional bluegrass, country and even jazz, the banjo has roots that stretch all the way back to West Africa. Musician Jayme Stone made that journey in search of the ancestors of his own banjo; along the way, he met kora player Mansa Sissoko. The two have collaborated on a new album called Africa to Appalachia.

Listen
Bringing The Banjo From 'Africa To Appalachia' 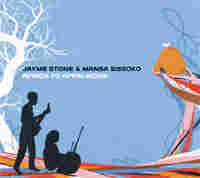 Music From The Session 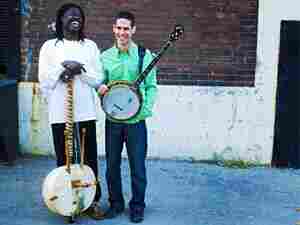 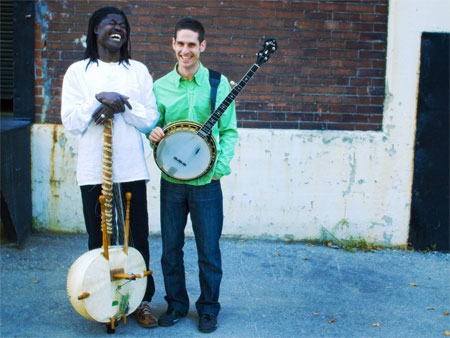 Kora player Mansa Sissoko and banjo player Jayme Stone found similarities in the sonic qualities and melodic phrasing between the banjo and its early African predecessors.

While typically associated with traditional bluegrass, country and even jazz, the banjo has roots that stretch all the way back to West Africa. Musician Jayme Stone made that journey in search of the ancestors of his own banjo. Along the way, he met kora player Mansa Sissoko. The two have collaborated on a new album called Africa to Appalachia, and recently spoke about their musical partnership from the studios of Minnesota Public Radio in St. Paul.

Originally, the banjo traveled across the ocean on slave ships coming from West Africa in the 1600s and 1700s. The instrument was "later passed off to curious 'white folk' like me," Stone says. "Although a few people play some of the crossover styles that happened early on in the new world, [it] didn't seem like there was much knowledge of the music that it came from."

Naturally, at that time, the instrument was not the modern-day banjo that most people recognize. Instead, it was more of an early incarnation that evolved over time.

"It's hard to say exactly what it was," Stone says. "More than anything, it was the blueprint of the banjo that traveled over in musicians' minds, and then they built a similar thing with what they had here: dried-out gourds, goat skin, whatever they could find. The instrument changed, and with the advent of metal, it became an African instrument that went through the Industrial Revolution."

The banjo in its current form has frets and employs a short droning string — what banjo players call the fifth string. But in Africa, these early predecessors sometimes used only one string and as many as 21. They have all kinds of names, depending on the region and dialect the people are speaking. Most common are the ngoni, which can have anywhere from three to nine strings; the two-stringed konou; and the one-stringed juru keleni, all found in various parts of Mali. Stone says that Senegal has instruments that are even closer in relation to the modern banjo — especially the akonting.

Sissoko specializes in the kora, a 21-string West African harp made from a calabash — a dried-out gourd also used to play percussion, as well as carry fruits and vegetables from the markets. Stemming out from the calabash, the kora has a long pole with leather straps tied to it that hold the 21 strings, which are made from fishing line. Despite the evolution of the instrument's physical aspects, when played side by side, the banjo and the kora have a very similar sonic quality.

"The sound of the notes are complementary," Stone says. "You have this nylon against metal, but in some ways the playing style and the melodic sensibility is quite similar."

"There are traces of all kinds of things," Stone says. "If you listen to what they call minstrel music — which was this first white adaptation of African music that was mixed with English ballads and Irish fiddle tunes and some European classical-music influences — this was the style that was popular at the turn of the last century. In that music, you can hear these little repeated phrases, and then they would change and move on to something else. Whereas in West African music, they would take these repeated phrases and they would stack on all these other phrases.

"In certain ways," he adds, "Malian music is like LEGOs: You have one thing, and you can kind of stack on another thing and another thing endlessly. All these different people bring in different melodies and rhythms, and it's what they call polyrhythm."

Stone says the versatility and flexibility of the banjo and its African ancestors attracted him to the instrument and makes it distinctive.

"Let's just face it: It's the hippest instrument, at least in my world," Stone says. "It's kind of quirky, but it's really adaptable. You can be supportive with it, it's a rhythmic instrument, you can play melodically, you can play all kinds of different things. More than anything, it's the player and the imagination, but I think the instrument is capable of playing anything."