Accessibility links
Niyaz: From Iran To India To Los Angeles Azam Ali and Loga Ramin Torkian, of the Persian-Indian music trio Niyaz, sit down to talk about their new album Nine Heavens. The disc blends modern electronica with old Persian folk songs and mystical Sufi poems. Ali talks about how her transcontinental journey from Iran to India, and then to the U.S., has shaped her music.

Listen
Niyaz: From Iran To India To Los Angeles

Ishq: Love and the Veil 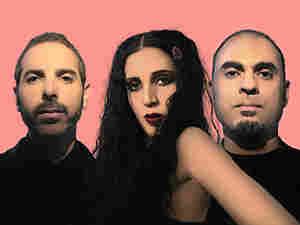 Azam Ali and Loga Ramin Torkian make up two-thirds of the Persian-Indian music trio Niyaz. Ali, who was born in Iran and moved to India when she was 4, and her husband Torkian, a native Iranian, now live in Los Angeles. They released their second album, Nine Heavens, earlier this year.

On Nine Heavens, Torkian used instruments from Iran, India and Turkey. He also created a new instrument, called kamman, which he says "comes from the family of spike fiddles." Ali, the vocalist, is also an accomplished hammered-dulcimer player, having learned how to play the instrument under the tutelege of a Persian master.

"In Persian classical music, they try to make it sound more like a piano," she says. "But I prefer the more folky, sort of rough sound."

Ali says she's faced many challenges as an Iranian living in modern America.

"Since I can remember, there is always such negative media around Iran," she says. "Especially nowadays, it's virtually impossible to turn on the news and not hear something negative about Iran. And it really is a struggle for every Iranian.

"In many ways, my life's work has become about this," Ali adds. "You know, create something that transcends religion and culture and show people that at the core we are all the same."

Ali says that, for a while, she tried to Americanize herself and reject her heritage, but she realized that that would never work.

"I began the process within myself, of sort of going back and learning about my own culture, embracing my culture," she says. "Once I did that, I began to feel much more whole. This music is an honest manifestation of who we are as Iranian immigrants."