Accessibility links
Chiwoniso Plays Zimbabwean 'Rebel' Music On her new album, Rebel Woman, Chiwoniso shows off an assertive style that no other female singer in Zimbabwe can match. In her songs, she stands up for her country's children and poor. One of the most compelling voices in African music today, she confidently borrows from other genres — especially American ones. 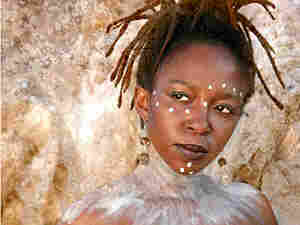 Zimbabwean singer Chiwoniso grew up on a soundtrack of Stevie Wonder, The Rolling Stones, Aretha Franklin and even Mozart. But her father, an ethnomusicologist, made sure that she also knew the songs of their forebears in Zimbabwe's Shona ethnic majority.

As her own talent emerged, Chiwoniso chose to make African music her focus. But when she unleashes her fabulous voice on a Shona melody today, she brings an assertiveness and style that no other female singer in Zimbabwe can match. Her new album is titled Rebel Woman.

The iron-pronged mbira heard in the songs on Rebel Woman is believed to call the spirits of ancestors in the Shona religion. It's the sort of element that has long distinguished that country's popular music. What sets Chiwoniso apart is her confidence in borrowing from other genres — especially American ones.

Chiwoniso's confidence extends to her lyrics, as well. She experienced Zimbabwe's recent economic and political decline up close, and on Rebel Woman, she stands up for children, the poor and a common-sense approach to development. She once sang in support of Zimbabwe's controversial land-redistribution policy, and she still backs its ideals today. But in "Kurima," Chiwoniso laments that the seized land was given to political cronies, rather than to farmers. Understated but deeply felt, "Kurima" gets to the heart of its subject, both thematically and musically.

For all the cultural crosscurrents in her music, Chiwoniso maintains a distinctly personal style and outlook. And Rebel Woman establishes her as one of the most compelling young voices in today's African music.