Accessibility links
A Deeply Imperfect 'Perfect Stranger' Halle Berry stars as a newspaper reporter in Perfect Stranger, investigating bad guy Bruce Willis. But the facts get fuzzy, and the film may have you asking yourself what's going on — and why it was even made. 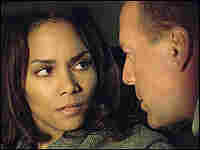 Halle Berry is on Bruce Willis' trail in Perfect Stranger. Or is it the other way around? Sony Pictures hide caption

There's been a lot of hand-wringing about the cost to society of the possible demise of newspapers, but one major negative consequence has been overlooked. What the heck are movies like Perfect Stranger going to do for intrepid heroines if newspaper reporter is out of the running?

It's true that Rowena Price, ace investigative reporter for the fictional New York Courier, is not exactly Lois Lane material. As played by Halle Berry, she's introduced doing things that would not exactly endear her to the Pulitzer board, but no matter. "God," Rowena says triumphantly, "I love this job."

This is the movies, after all, and making Rowena a reporter makes it easier for her to launch an investigation of her own into the prime suspect, played by Bruce Willis, when her childhood friend turns up brutally murdered. So much information to gather, so little time.

Perfect Stranger is a star vehicle set in New York, the city that never sleeps, or even takes naps. It is an acceptable thriller, neither the worst one you've seen nor the opposite. But the question of why this one was made is more of a puzzle than who did the awful deed. By the time you figure these questions out, you no longer care about the answer to either one.

On the most basic level, Perfect Stranger got the go-ahead because two bankable stars agreed to be in it. So watching it is kind of like watching the visual echo of a business deal, or, more specifically, a merger between two powerful corporations, each with its own assets and skill sets.

Berry gets to look great and dominate the picture. Willis, who by this time can do these roles in his sleep, is likely telling the truth when he says he signed on because of the working conditions: "Not a hard day at the office — go to work and flirt with Halle Berry."

Perfect Stranger offers lots of misdirection and closing twists as it plays with the notion of who's playing who for a fool.

By the time everything falls into place, however, it doesn't much matter. The best thrillers don't just show up for the closing credits, they are involving all along the way. That's where Perfect Stranger goes imperfectly wrong.