Accessibility links
Columnist Krugman Wins Nobel For Economics Princeton economist and New York Times columnist Paul Krugman won the Nobel economics prize on Monday for his analysis of how economies of scale can affect trade patterns and the location of economic activity. 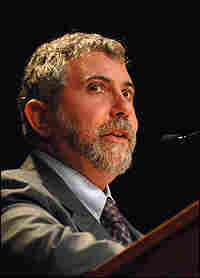 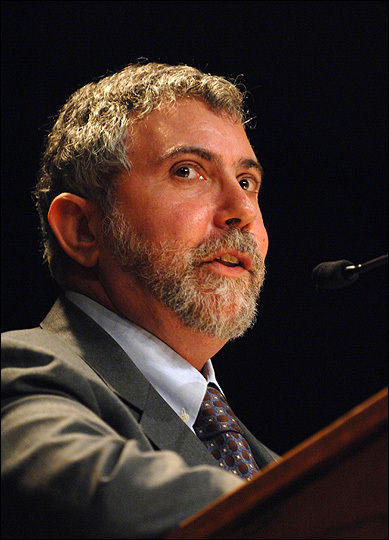 Paul Krugman at a 2007 lecture in New York City.

Princeton economist and New York Times columnist Paul Krugman won the Nobel economics prize on Monday for his analysis of how economies of scale can affect trade patterns and the location of economic activity.

Krugman was the lone of winner of the $1.4 million award and the latest in a string of American researchers to be honored.

The Royal Swedish Academy of Sciences praised Krugman for formulating a new theory to answer questions about free trade.

"What are the effects of free trade and globalization? What are the driving forces behind worldwide urbanization? Paul Krugman has formulated a new theory to answer these questions," the academy said in its citation.

"He has thereby integrated the previously disparate research fields of international trade and economic geography," it said.

The award, known as the Nobel Memorial Prize in Economic Sciences, is the last of the six Nobel prizes announced this year and is not one of the original Nobels. It was created in 1968 by the Swedish central bank in Nobel's memory.

In addition to his work as an economist at Princeton University in New Jersey, where he has been since 2000, Krugman also writes about politics and inequality in the United States and other topics for The New York Times.

Commenting on the global economic meltdown, he told a news conference in Stockholm by telephone from the United States that some of his research was linked to currency crises and related issues.

"This is terrifying," he said, comparing it to the financial crisis that gripped Asia in the 1990s.

He said winning the Nobel award won't change his approach to research and writing.

"The prize will enhance visibility," he said, "but I hope it does not lead me into going to a lot of purely celebratory events, aside from the Nobel presentation itself."

The citation said Krugman's approach is based on the premise that many goods and services can be produced at less cost in long series, a concept known as economies of scale.

His research showed the effects of that on trade patterns and on the location of economic activity.