Accessibility links
Arranged Marriage: Trapped Between Two Cultures Many young Muslims in the U.S. clash with their parents over the issue of arranged marriages. Tensions involve family traditions and the yearning for independence. 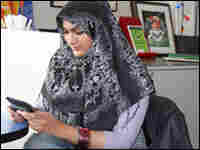 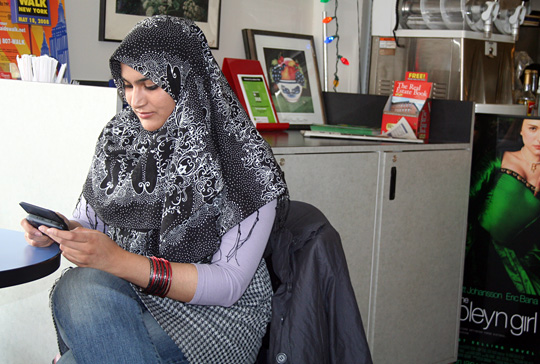 Mediha Sandhu texts in an Internet cafe in Bayonne, N.J.

Many young Muslims in the U.S. clash with their parents over the issue of arranged marriages. There are tensions involving family traditions and the yearning for independence.

Take Mediha Sandhu. The 25-year-old sits in an Internet cafe, texting on her phone. She's still single, living with her family in Bayonne, N.J., and her whole family is freaking out.

She looks like your typical modern Muslim girl. She's in jeans and high heels. Her dark eyes are lined with makeup. But she's also wearing a veil, and that, she says, makes her seem too conservative to the men her parents have tried to marry her off to.

For many families like Sandhu's, a marriage arranged by the parents is the best way they know to guarantee a solid future for their child.

The men Sandhu's parents have in mind aren't here in New Jersey. They're back in Pakistan, a country she left when she was 5 years old. Her parents still travel there regularly, hoping to find her a match. But living in the States all this time has made Sandhu feel more connected with her religion than her native culture. And she feels more American, too.

"Pakistan is too different. It's like having my arms being taken off. There's very little for a girl to do but stay home and cook and clean," she says.

Still, her parents want her to marry someone from the old country.

So, at 25, why doesn't she just leave home? Sandhu is like so many young Muslims whose parents have come from overseas to start a new life here while clinging to traditions they left behind. She loves and respects her parents and wants to be a good Muslim, so she goes along with their wishes, to a point. She feels trapped between the two cultures.

Earlier this year, Sandhu put together an animated film called "Arranged" and entered it into a competition, which she won. In one scene, she describes how a young bride has to keep looking down during the wedding ceremony; it's meant to show she's sad to leave her family. But the groom can look wherever he wants.

Sandhu doesn't write the whole arranged-marriage thing off. Indeed, she thinks it helps to enter marriage with a clear-eyed realism she thinks other people miss when they're head-over-heels in love. Her biggest fear is she'll be forced to live in Pakistan and give up her art, her drawing.

She's only got one semester of her fine arts degree to go, but it's been continually postponed because of her parents' mission to see her married. They're on the verge of taking her overseas again, though she's signed up for classes and hopes to finish. Ultimately, she wants to work as a digital artist. She hopes whoever her parents have in mind for her will be OK with that. But she also hopes that is years away.