Accessibility links
That Was Cinerama: A Critic Waxes Nostalgic With the summer movie season just weeks away, we'll be hearing plenty about new digital this and computer-generated that. Bob Mondello thinks that's the perfect reason to indulge in a little nostalgia for Cinerama, one of the grandest Hollywood spectacles of old.

Listen
That Was Cinerama: A Critic Waxes Nostalgic 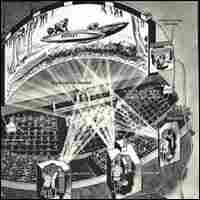 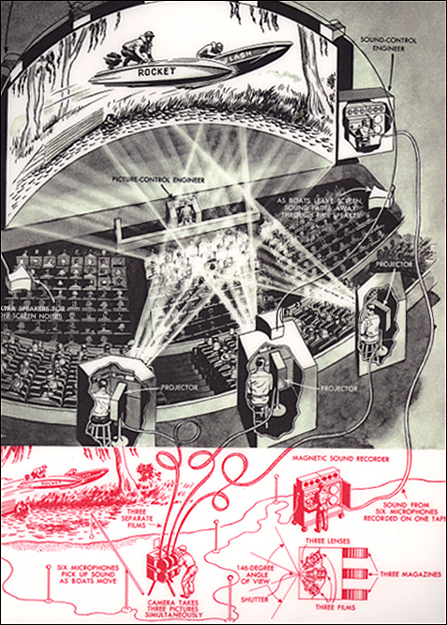 A vintage illustration explains the Cinerama process, from filming (in red) to projection (in black).

In a couple of weeks, Spider-Man 3 and Shrek the Third are going to usher in the summer movie season. And every week, we'll hear about some new digital this or computer-generated that. So this may be our last chance for a while to wallow in nostalgia for the spectacles of old.

About a half-century ago, Hollywood went through another technology boom — designed to combat a newfangled threat called "television." In 1952, when the small screen was just invading everybody's living room, movie moguls worried that people wouldn't be going to movies anymore, so they decided to give them an experience the little black-and-white screen couldn't touch. Bigger, in color — and most of all, wider.

The most spectacular of the wide-screen processes was Cinerama, which required three synchronized cameras to capture an image that was then projected on an enormous curved screen that filled an audience's peripheral vision. This required not just three projectors, but four filmstrips (one for the soundtrack), and five projectionists (one for each projector and one to makes sure it all matched up right).

The result was spectacular enough that The New York Times covered the debut of the process' first feature, This is Cinerama, on its front page. Film critic Bosley Crowther wrote of "the shrill screams of the ladies and the pop-eyed amazement of the men" that greeted the film's passenger-eye-view roller-coaster sequence, opining that "it was really as though most of them were seeing motion pictures for the first time. The effect of Cinerama is 'sensational,' in the literal sense of that word."

It was, however, costly and complicated to film in the three-camera process — if the director shifted the angle a few feet, hundreds of acres of territory were suddenly made visible in a film like How The West Was Won — and it was also expensive to outfit theaters to project it. In the decade following that Bosley Crowther review, only seven pictures were made using three synchronized cameras.

And after 1963, it was mostly the name that survived. Films released under the Cinerama banner were primarily filmed in UltraPanavision or in one of a variety of other single-camera wide-screen processes.