Accessibility links
Commanders Look For New Strategy In Afghanistan As the war in Afghanistan continues, military commanders are exploring new options and strategies as they struggle to contain a strengthening enemy. Efforts are under way to train more Afghan forces as U.S. military equipment is moved into the country from Iraq.

The second of a five-part series 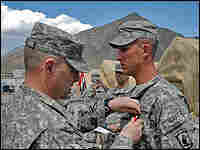 Brig. Gen. Mark Milley says progress is being made in the Tagab Valley. "We think we're having very good success," he says. U.S. Army hide caption 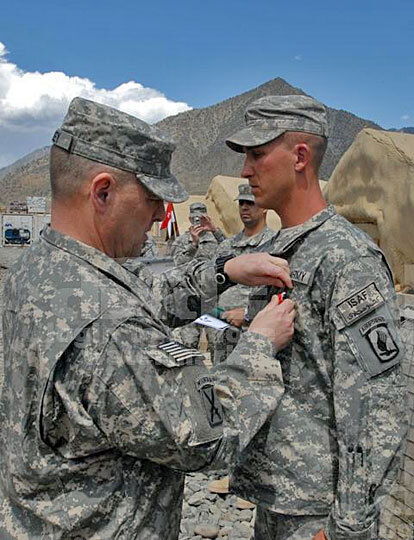 Brig. Gen. Mark Milley says progress is being made in the Tagab Valley. "We think we're having very good success," he says.

The 1,600 mile frontier between Afghanistan and Pakistan has always been a wild and often violent region, but never more so than today. There is warfare on both sides of the border. In the West, U.S., NATO and Afghan government forces are battling the Taliban and other insurgents allied with al-Qaida. And in the East, the Pakistani army is engaged in a sustained campaign against those same insurgents in one of the tribal territories along the frontier. This five-part series focuses on these conflicts which have major implications for whoever succeeds George W. Bush in the White House. 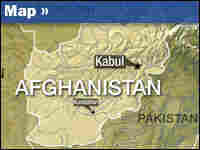 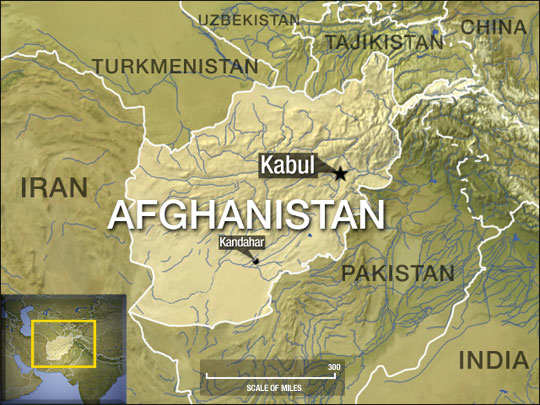 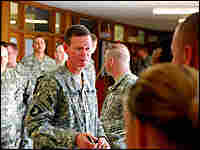 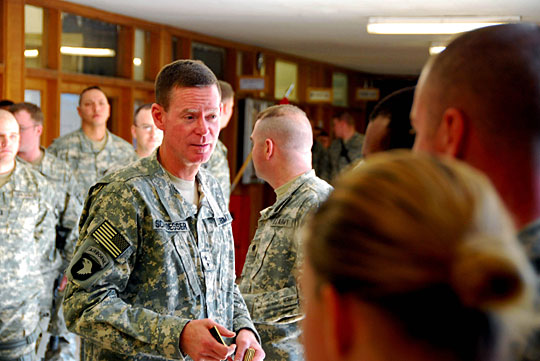 Maj. Gen. Jeffrey Schloesser presents commanders' coins to soldiers from the 1st Battalion, 502nd Infantry Regiment, 2nd Brigade Combat Team at Forward Operating Base Justice in Iraq, Jan. 29. The coin is personally designed by a commander and rarely given out.

Casualty rates for American soldiers in Afghanistan now rival those in Iraq, and one of the deadliest areas for U.S. troops is along the eastern part of that country, hard up against the border with Pakistan, from where Taliban and other militants slip in to stage attacks.

American soldiers wait outside their Humvees at an Afghan police station in Parwan province, an hour's drive from their main base at Bagram Air Field.

Some grab bottles of water. Others chat with local police and translators, as workmen pass pulling handcarts stacked with large sacks of tea and rice.

Still other soldiers peel off their helmets and body armor and return "thumbs-up" signs to the local kids, wading into a concrete canal just on the other side of a barbed-wire wall.

Soon, talk turns to the ever-rising number of attacks in nearby Kapisa province, just northeast of Bagram.

"We have seen an increase, particularly an increase in roadside bombs, in the last few months," says Maj. Ben Richardson, who helps with the police training here and in Kapisa. He's a tall, amiable National Guard officer who teaches high school history in Oswego, in upstate New York.

He says Afghan and U.S. forces beat back the insurgents, only to see more replace them.

"Then they'll get an influx of foreign fighters or fighters at least not from the area — not necessarily from Pakistan, but not local," he says, "sort of a backbone injection, if you will, and then you'll see an increase in fighting again."

That backbone injection has led to a 40 percent increase in attacks over the past year. Commanders say they are facing larger attacks that are more sophisticated, such as ambushes and nighttime assaults.

Now, American commanders say Taliban fighters are trying to isolate the capital of Kabul itself by closing off the four main roads leading into the city, much like Islamic fighters did successfully against the Soviets some 20 years ago. So commanders recently replaced an American unit with a larger French force in the Tagab Valley to block off that northern route.

"We put almost 700 French paratroopers into that valley," says Brig. Gen. Mark Milley as he stabs his finger at a map inside his office at Bagram. He's a burly and talkative Princeton graduate with deep circles under his eyes.

"We think we're having very good success," Milley says, leaning back. "It's a little bit too early to tell — don't want to declare victory sort of thing. But we think we've had very good success against a tenacious enemy just on the northern edge of Kabul."

When some 4,000 troops from the Army's 10th Mountain Division arrive here in January, they'll help control the southern and western roads leading to Kabul, according to officers here.

But Milley and other senior officers know that's only a start. There just aren't enough troops to hold ground and stop all the attacks that are popping up here and throughout Afghanistan.

"You can't be everywhere," says Milley. "And given the number of troops we have, we have to be selective in where we put them."

Two or three more American brigades will be coming here next spring or summer. That's at least 8,000 to 12,000 more troops.

Together with NATO and Afghan forces, the total could reach a quarter-million under arms into next year. Some officers argue that's not enough.

They point to the troops-to-civilian ratios in the Army's counterinsurgency manual, created by Gen. David Petraeus, who has gone from commanding troops in Iraq to commanding the entire region, including Afghanistan.

That mathematical formula says the need may be as high as 400,000 troops, to protect the Afghan population. Afghanistan, with nearly 32 million people, is one third larger geographically than Iraq, and has roughly three million more people.

"I clearly think we need more troops. There's no doubt about that," says Maj. Gen. Jeffrey Schloesser, who commands all U.S. and allied troops in eastern Afghanistan. He and Milley won't get into a discussion about how many more, but both say the main goal is more Afghan forces.

"I'm very much encouraged by seeing the increase in the Afghans," says Schloesser. "It's the Afghan face meeting with the Afghan that really changes that person's perception on a daily basis."

But boosting the number of Afghan forces will take time, says Brig. Gen. Tony Ierardi, one of the top trainers for the Afghan Army. He says he anticipates an Afghan force of 122,000 by 2013.

A New Strategy For Afghanistan

Faced with mounting attacks, the White House and the Pentagon are trying to come up with a new strategy for the country, considering everything from adding more troops and development money, to working with Pakistan, to stopping cross-border attacks.

Among the questions being asked: Can Afghan forces be expanded rapidly by organizing — even arming — the country's tribes, much like the tribes in Iraq were brought into the fight against al-Qaida two years ago? That effort started in Iraq's Anbar province, which at one time was among the most violent. Now it's one of the most peaceful provinces.

"I don't think there's any broad consensus on arming the tribes," says Schloesser. "There's a fear that going back to any kind of warlordism or armed militias is a step backward. But I think there is an attempt to empower the tribal elders and tribes to try to help in security."

Empower the tribes, but not necessarily arm them — that's what the Afghan government wants. Some American officers say there's no need to arm tribesmen who already are toting AK-47s in large numbers.

So talk now is how to organize some or many of the 400 Afghan tribes by offering payments, communications equipment and other supplies.

"There are valuable lessons from Iraq that can be applied here," says Milley. "The Anbar Awakening, the tribal engagement that was done in Anbar, may be one of those lessons. We'll have to wait and see."

One thing missing here is the luxury of time. With a lack of troops, American and NATO forces are turning increasingly to a tool they have in large numbers: bombs.

Airstrikes have tripled in the past two years, from hundreds to thousands. That's led to more civilian deaths and outrage from humanitarian groups and the government of President Hamid Karzai.

One of the men who calls in airstrikes is Matt, an Air Force captain who asked that his full name not be used. He works with a Green Beret team outside the southern city of Kandahar and with Afghan commandos who use bullhorns, warning civilians to flee before an expected raid.

Matt says the rules governing airstrikes have been tightened recently by American commanders, worried that innocents might be inside a house or building.

"If you think that there might be, then you don't bomb it. That's the bottom line," says Matt.

But he admits that in the midst of a serious firefight, the rule might have to be ignored. That seems to be what happened during a recent U.S. air attack in western Afghanistan in early September.

A Green Beret and Afghan commando assault was pushed back by heavily armed Taliban fighters, so an AC-130 gunship was called in and launched 105-mm shells against the fighters standing on buildings, one military officer says. Those rounds pierced through the roofs.

When it was over, some 30 civilians were dead, along with two dozen Taliban fighters, according to a recently completed investigation. Its results have not been released. The U.S. initially placed the civilian death toll at five, then seven.

"Now there could be a situation where our commandos, our Afghan counterparts, are under such withering fire that we know we're going to take mass casualties if we don't do something and that's the only avenue of approach," says Matt. "The ground forces commander has to make that decision."

Next month, three additional large bomb-dropping drone aircraft called Reapers will be shifted here from Iraq to help target insurgents and other fighters from the skies.

Nate Fick understands the dilemma facing American commanders. He was a Marine combat officer in Iraq and Afghanistan, and now he's a defense analyst who visited Afghanistan for a month this summer.

"If I'm a platoon with nobody behind, and I know that only that F-15 stands between me and the possibility of being overrun, then you're right — I have an obligation to protect my soldiers or my Marines," he says. "And I may well be more likely to drop the bomb."

Fick says a central issue in Afghanistan now goes beyond whether to drop a bomb; it's more whether anyone has a workable plan.

"We have a sound bite about a representative Afghanistan at peace with itself and its neighbors," says Fick. "But we don't have a defined strategic objective."

Fick says there's no agreement among allies, even within the American government, about the road ahead. Is this all just to defeat insurgents or to build a new country? Those efforts, some say, could take 25 years.

The American helicopter rides high above eastern Afghanistan, through a pass in the towering Hindu Kush range. Brig. Gen. James McConville gestures toward a valley far below, and a thin line of asphalt. Americans point to that as a sign of progress: a main road that by next fall could link Afghanistan and Pakistan.

The helicopter lands in a remote camp at Gardez, where State Department aid worker Rick Carbone says the road will bring economic development. But he worries that the road crews will only face more insurgents as it rises toward a 9,000-foot pass.

"Well, the hard part's coming next year, because they haven't really started construction inside the pass yet. And the pass is an ambusher's nightmare," Carbone says.

The hard part's already here for U.S. troops — fighting increasing numbers of insurgents and waiting for more troops and aircraft.