Accessibility links
Is The U.S. 'Nationalizing' Banks? The government's decision to purchase minority stakes in financial institutions and further expand its deposit insurance programs will give it unprecedented power over financial institutions. It's an intervention many find unsavory, but necessary.

Is The U.S. 'Nationalizing' Banks?

Is The U.S. 'Nationalizing' Banks? 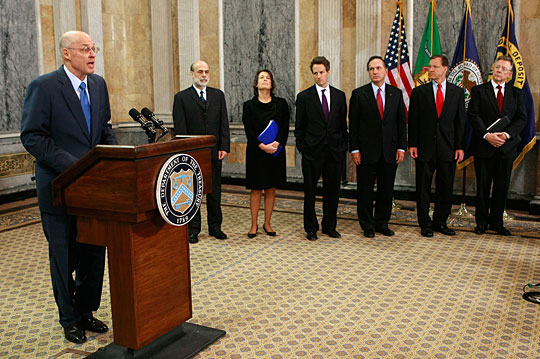 Morgan Stanley CEO John Mack (left) and Citigroup CEO Vikram Pandit leave a meeting at the Treasury Department on Monday. The department said Tuesday that it would buy preferred shares of stock in these two banks, as well as in seven others. Mark Wilson/Getty Images hide caption 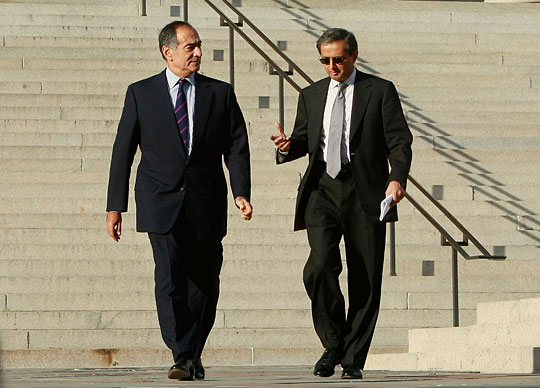 Morgan Stanley CEO John Mack (left) and Citigroup CEO Vikram Pandit leave a meeting at the Treasury Department on Monday. The department said Tuesday that it would buy preferred shares of stock in these two banks, as well as in seven others.

But do the steps that the Treasury and the Federal Deposit Insurance Corp. plan to take amount to a partial nationalization of our financial system?

"Government owning a stake in any private U.S. company is objectionable to most Americans — me included," said Treasury Secretary Henry Paulson in a prepared statement on Tuesday. "Yet the alternative of leaving businesses and consumers without access to financing is totally unacceptable."

Ben Chabot, a senior lecturer in Yale's department of economics, says the government is "straddling the fence" of nationalization with its latest plan.

"On the one hand, it's not nationalization because they didn't buy common stock with voting rights, so they don't have a seat at the table," says Chabot. "[But the] government has all sorts of ways to influence a bank without owning shares in it." The takeover of Fannie Mae and Freddie Mac is the most recent example of this, he says.

In a bid to restore confidence in the financial markets and jump-start lending activity, the Treasury said it would buy up to $250 billion of preferred shares of stock in U.S. banks and savings and loans. The program, which the Treasury says is voluntary, will be open to financial institutions of all sizes that apply for assistance prior to Nov. 14. Investments in each institution will be limited to $25 billion or 3 percent of risk-weighted assets.

Without naming names or releasing numbers, the government said that nine major financial institutions agreed to participate in the capital purchase program for a total of $125 billion in investments. Reports, however, indicate that some of the companies had to be strong-armed into the deal.

The shares that taxpayers will own will be paid back with "a reasonable return," the Treasury Department said, adding that taxpayers will also have warrants for common stock, which means an option to buy such shares in the future. The Journal also reported that these preferred shares will carry a 5 percent annual dividend that increases to 9 percent after five years. This will, in effect, create an incentive for banks to wean themselves off of the capital infusion, or else the government will collect a greater share of returns.

The government said that any companies that elect to participate will also have to abide by the Treasury Department's rules for corporate governance and executive compensation. Those rules include steps to take back executive benefits or compensation when appropriate and to insure that no one can walk away with a golden parachute while taxpayer money is at risk.

The FDIC said that it is implementing two measures to improve the flow of funds for banks. The agency said it would guarantee "newly issued senior unsecured debt" of banks and other financial services companies and that it would temporarily extend the FDIC insurance guarantee to any dollar amount for non-interest-bearing deposit accounts through 2009. The previous limit for these accounts was $250,000 per account; that had been raised from $100,000 less than two weeks ago.

These steps are a "huge deal," says Chabot, because non-interest-bearing accounts tend to be corporate accounts. "This should restore confidence for institutions that fund themselves through deposits."

Chabot said there were signs that the step was already helping unlock the credit markets on Tuesday: The benchmark LIBOR, or London Interbank Offered Rate, which is the rate banks charge each other to borrow money, moved lower for one-month and three-month loans. But it remains high.

"This is nationalization of a big chunk of the financial system," says Mark Zandi, chief economist for Moody's Economy.com. "They now have the authority and power to nationalize as much of the system as they deem necessary to make sure the system remains intact."

The $250 billion cap on the capital infusion program, he says, was a way for government officials to "signal their discomfort" with having to intervene so aggressively and to reassure the markets that this is a temporary move.

Zandi says that what makes this so unique is that it has happened in such a short period. "In literally four or six weeks, the government has gone from being a bystander to fully backstopping the financial system," he says.

Others say the threshold for defining nationalization is when the government takes control and starts expropriating property.

Simon Johnson, a senior fellow with the Peterson Institute for International Economics who has also served as the economic counselor for the International Monetary Fund, says the actions fall short of nationalization and represent "strong government support for the financial system." He says it's why the markets are up: "If you're really nationalizing, markets go down," because the private sector doesn't get market price compensation when nationalization takes place.

"What the government is offering is actually a really good deal for the banks," he says. It's in stark contrast to when the government let Lehman Brothers wither and stepped in to rescue AIG, which "inadvertently destroyed confidence in the global financial system," he says. "Today I feel like my money is pretty safe where it is."

Still, Johnson says the Treasury Department should create a war chest with the remaining $450 billion of the bailout package; those funds will be available at the discretion of the president. Johnson thinks the government should "give up on the idea of purchasing mortgage-backed securities."

The American Bankers Association voiced its support for the emergency action on Tuesday. But their president and CEO, Edward Yingling, said that "this is not a program" they asked for. An ABA spokesman said the Treasury's capital infusion plan is "a good tool to have, but a great majority of financial institutions don't need it because they're already well-capitalized."

In its quest to bring reassurance to the market and to thaw the credit lines, the Treasury Department "is really trying to flood the campfire to make sure every ember is out," the ABA spokesman said.

Meanwhile, the Treasury said that it is developing a third program to give failing companies direct assistance and that the terms of this assistance will be determined on a case-by-case basis.