Accessibility links
Multitasking In The Car: Just Like Drunken Driving Drivers may feel comfortable chatting on their cell phones while navigating the streets. But brain researchers find it's a dangerous combination, even with a hands-free device.

Listen
Multitasking In The Car: Just Like Drunken Driving 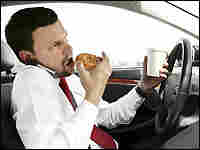 "If you're driving while cell-phoning, then your performance is going to be as poor as if you were legally drunk," says professor David Meyer. iStockphoto.com hide caption

In this driving simulation, participants were asked to answer a true-false question at a beep while simultaneously keeping the car on the road. 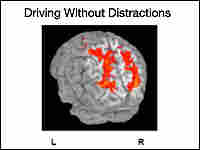 Researchers found that the brain was less focused on driving when drivers were chatting. Click to see what the brain looks like when driving and talking. Courtesy of Carnegie Mellon University's CCBI lab hide caption 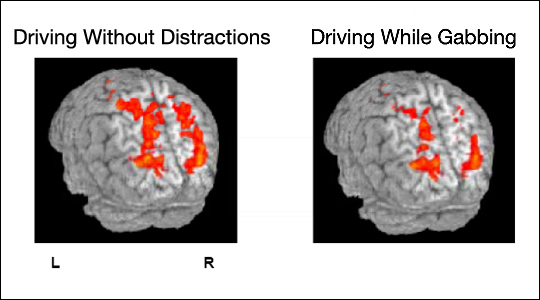 In a simulation, participants were asked to listen and respond to sentences while driving. Researchers found that when drivers chat, less of their brain is focused on the road. More brain activity shifts to the frontal areas of the brain that handle language, which aren't shown here.

Drivers seem pretty comfortable chatting on their cell phones while navigating the streets. But brain researchers say it's a terrible idea, even with a hands-free device.

"If you're driving while cell-phoning, then your performance is going to be as poor as if you were legally drunk," says David Meyer, a psychology professor at the University of Michigan.

"If you test people while they're texting or talking on the phone, they will actually miss a lot of things that are in their visual periphery," says Earl Miller, a neuroscientist at the Massachusetts Institute of Technology.

Driving requires a surprising amount of brain power. Out on the road, we have to process huge amounts of visual information, predict the actions of other drivers and coordinate precise movements of our hands and feet.

Even when using a hands-free device, scientists have found that talking on the phone distracts us to the point where we devote less brain power to focusing on the road.

Marcel Just, a neuroscientist at Carnegie Mellon University, says that's why people learning to drive don't do anything else.

"Novice drivers turn off the radio, they ask you not to talk to them. They need all the brain participation they can get for the driving," Just says.

But the level of focus required changes with experience. Over time, the brain rewires itself to do the tasks involved in driving. So when our eyes see a red light, our foot hits the brake, with no conscious thought involved. Just says driving becomes automatic.

"You find yourself arriving at some destination and not remembering much about the trip. I sometimes find myself passing a car without remembering that I decided to pass. So I don't know much about my own (automatic) driving," Just says.

Scientists call this phenomenon "automaticity." It lets us do one thing while focusing on something else. In other words, learning to do one task automatically helps us to multitask.

If the brain is so good at this, why not chat on the cell phone while driving? To answer that question, we could have tested the limits of an actual driver in actual traffic. That seemed like a bad idea. So we came up with a demonstration that's a bit more refined.

Pushing The Brain — Concerts And Conversation

We brought a professional pianist into the studios here at NPR. A musician like Jacob Frasch has a lot in common with an experienced driver. Both can do a complex task that has become automatic while carrying on a simple conversation.

For over an hour, we tasked Frasch with playing a range of pieces, some he knew and some he had to sight-read. While he was playing, we asked him to multitask. Sometimes the additional work was simple. For instance, Frasch has no trouble talking about his childhood while playing a Bach minuet. But when the challenges took more brain power, it was tougher for Frasch to answer questions and play the piano at the same time.

Just says there's a lot going on in the pianist's brain. Several circuits are busy decoding and producing language. And that's only the beginning.

"There's a network of areas dealing with the music. Certainly, auditory cortex — again, very importantly, motor control of his hands and fingers while he's playing. Areas associated with music processing in the right hemisphere behind the right ear, roughly speaking," Just says.

Back in the studio, our pianist was multitasking up a storm. But his brain was working near capacity. So, we decided to see what would happen if we increased his task load — just a little.

We asked Frasch to play a Brahms piece he knows by heart, while reading from a magazine article that we placed in front of him.

Neuroscience studies using brain scans have shown that the brain struggles with paying attention to sights and sounds simultaneously. When the brain starts working on a visual task, its auditory parts show decreased activity, and vice versa.

Indeed, while his fingers sounded out Brahms, Frasch stumbled on some words in the magazine article, but recovered nicely — like a driver on a cell phone who drifts into another lane for a moment.

So we took it up another notch. We gave Frasch a piece of music he'd never seen before, a fast-tempo number. While he was sight-reading, like a driver navigating an unfamiliar route through a big city, we asked him to do a math problem:

Frasch played on while he thought through the problem out loud. He hit a few wrong notes on the keyboard before coming up with the right answer: 52.

A multitasking driver might have hit something else. Just says the pianist, who was already working hard to follow the music, simply couldn't handle something else that required real thinking.

It's like driving on an unfamiliar road and getting a cell phone call from an angry spouse. You may not notice that stalled car up ahead.

In fact, driver inattention is involved in about 80 percent of crashes, according to a 2006 study by the National Highway Traffic Safety Administration. The 100-Car Naturalistic Driving Study found the most common distraction for drivers was use of cell phones — with the number of crashes attributable to dialing nearly identical to the number associated with talking or listening.

"People say when an accident is happening, you have these phenomenological reports. People say 'my life flashed in front of me, time seemed to slow down' and so on and so forth. And I think that those are manifestations of your brain very suddenly attempting to change modes, from the automatic to some very controlled strategic mode," Just says.

Switching modes takes time — maybe only a quarter of a second. But on the freeway, that means you've gone an extra 20 feet before you hit the brake.