Accessibility links
As Obama Leads Polls, Bradley Effect Examined What voters tell pollsters and what they do in the privacy of the voting booth may differ. Los Angeles Mayor Tom Bradley, an African-American, lost the 1982 California gubernatorial race even though he had a double-digit lead in the polls. Some wonder if history will repeat itself in the case of Obama. 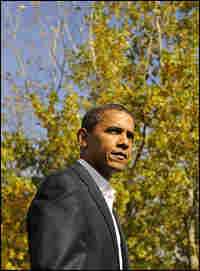 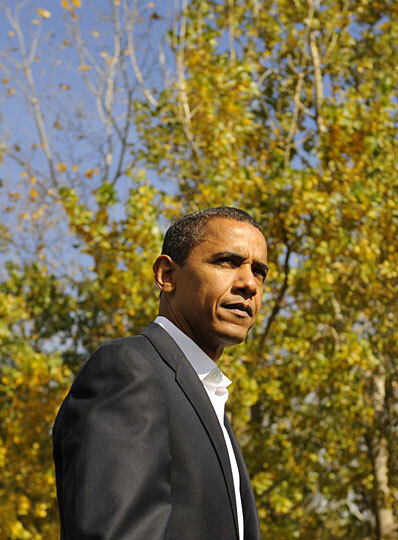 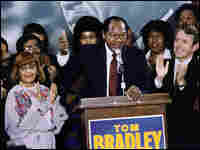 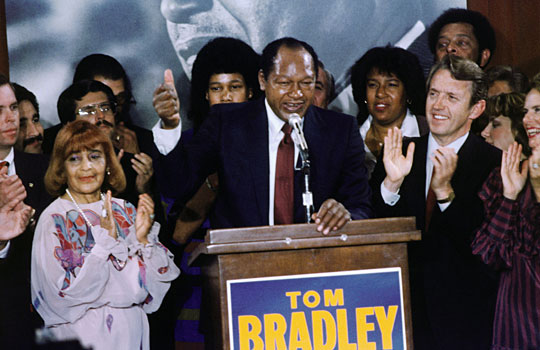 Los Angeles Mayor Tom Bradley stands with supporters during a campaign rally in November 1982. Although Bradley led the polls in double digits, he lost the California gubernatorial race to George Deukmejian.

In most polls, Barack Obama is leading John McCain in the candidates' bid for the presidency — but what if that lead is exaggerated?

For years, pollsters and political analysts have argued about something called the Bradley effect, when voters tell pollsters they'll vote for the black candidate but end up pulling the lever for the white candidate.

In 1982, the African-American mayor of Los Angeles, Tom Bradley, ran for governor of California. He led in the polls by double digits but lost narrowly to the white candidate, George Deukmejian.

Seven years later, something similar happened to Doug Wilder in his race for governor of Virginia. Public polls showed him up by 9 to 10 points. And he ended up winning — but only by a few thousand votes.

Wilder says that now the U.S. is an "emerging, evolutionary stage" when it comes to race.

"I like to remind people, however, that if the Wilder effect plays in this election, it'll be good because I won," he says.

A lot has changed since then.

In 2006, Harold Ford — an African-American running for a U.S. Senate seat representing Tennessee — received as many votes as pre-election polls suggested he would. So did Ron Kirk, the black mayor of Dallas, when he ran for the Senate in Texas in 2002.

During this year's Democratic primaries, University of Washington social psychologist Tony Greenwald did a study to see if there was a Bradley or Wilder effect at work in the contest between Hillary Clinton and Barack Obama.

What he found was surprising. In a few states — California, Rhode Island and New Hampshire — Obama did worse than polls predicted. But in 12 state primaries, he actually did better.

Those were states that have a relatively high black population, Greenwald says. He says there is a reverse Bradley effect.

Ron Walters, a political scientist at the University of Maryland, thinks the phenomenon of white voters misrepresenting their views about black candidates to pollsters isn't extinct, but he's sure it will play a smaller role this year.

"The Bradley effect this time will likely be overwhelmed by the new registrations and by the shifts in little things, like black Republicans voting for Barack Obama," Walters says. "It's not a normal election."

Not A Normal Election Year

The Obama campaign is adamant that the Bradley effect is no longer a factor. Aides say they know there are people who won't vote for Obama because he's black, but that's a different problem altogether. And they believe there are fewer such voters this year.

Cornell Belcher, the DNC's pollster and Obama adviser, says this year voters' concerns about the economy are so overwhelming, they may help diminish traditional resistance to a black candidate.

Even so, Ron Walters says race is playing a role in the campaign.

"The presidency is almost an anthropological leadership position. ... It represents the head of a tribe for many people," Walters says. "They want a president to be like them, look like them, etc. And to that extent, there's a lot of emotional content about who the president of the United States is. ... Barack Obama — part of the politics of this election is that he's been trying to overcome that cultural barrier."

The consensus seems to be that while there are people who will not vote for Obama because he's black, there are probably a lot fewer of them who are willing to lie about it to pollsters.