Accessibility links
Q&A: What Will The Intellectual Property Czar Do? A newly authorized White House coordinator will ride herd on law-enforcement aimed at intellectual-property theft. The entertainment industry says it's vital; critics say it's a waste of time and money. NPR's Laura Sydell explains.

Listen
Q&A: What Will The Intellectual Property Czar Do? 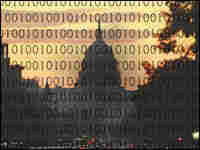 While Congress was embroiled in the battle over the financial bailout bill, both houses somehow managed to overwhelmingly approve legislation backed by the entertainment industry. The bill will help step up enforcement efforts against intellectual property theft.

Entertainment giants have argued vigorously that the movies, music and other intellectual property produced by their industry are crucial to the economic health of the United States. But they also have many critics who say their law-enforcement strategy is wrongheaded — and a waste of taxpayer money.

What's in the bill just passed by Congress?

One of the most notable provisions is the creation of an intellectual property coordinator. This is a White House-level position to be appointed by the president; some people are calling the new post the IP czar. (In fact, the House version of the bill did call the position a czar, but it was taken out in conference.) The IP coordinator will oversee the law-enforcement efforts of some very disparate government agencies — the U.S. Trade Representative, the Department of Homeland Security, the State Department and the Department of Justice — in the area of piracy and IP infringement.

The bill also has a forfeiture provision that will allow law enforcement to seize assets from anyone accused of intellectual-property theft — even before they are proven guilty. It also authorizes more than $50 million to help state and federal law-enforcement agencies.

Why did the bill pass so overwhelmingly?

One of the bill's Senate sponsors, Patrick Leahy, called this one of the most important pieces of legislation he ever wrote. As the senator sees it, protecting intellectual property is essential to the economic health of the United States. "We are the envy of the world for the quantity, the quality of our innovative and creative goods and services," he said in a speech on the Senate floor. "And if we want to continue to lead the world in producing intellectual property, we need to protect Americans' rights in that property."

The senator may well have been influenced by some numbers that do make the case for the importance of intellectual property to the American economy. According to the U.S. Chamber of Commerce, 40 percent of the nation's economic growth comes from intellectual property, including music, movies, pharmaceuticals, fashion and software. But the biggest backer of more law enforcement is the entertainment industry.

Why does the entertainment industry say it needs more law enforcement to protect its intellectual property?

Well, the industry says it's losing billions of dollars every year in stolen intellectual property, and the numbers are going up. Over the last five years, the recording industry has taken a real financial hit that it attributes to piracy. CD sales have been declining for the last five years, and online music sales aren't making up for the loss. The industry says what's happening is that people are using peer-to-peer online services to swap unauthorized music files.

Now that more people have high-speed Internet connections, the movie industry worries that it, too, will see a decline in sales. And it's not just individuals that Hollywood fears: Dan Glickman, head of the Motion Picture Association of America, says that "piracy of music and movies is becoming increasingly more sophisticated, and in many cases involves organized-crime type of syndicates that are often worldwide." He says they use the Internet, and they are making enormous profits.

But the bill actually faced some hefty opposition, right?

The Justice Department sent a strongly worded letter to Congress opposing certain provisions. Officials in the DOJ did not like the idea of an IP czar. That's why California Rep. Zoe Lofgren voted against the bill: She agreed with the DOJ when it said that such a position would take away the department's autonomy. Lofgren said the bill will "divert resources from the drug cartels and organized crime and mortgage fraud and investigating the pirates on Wall Street to do copyright enforcement."

The DOJ had even more objections to earlier versions of the bill. One provision, since struck, authorized the Justice Department to take on civil cases and collect damages for private copyright holders. That's something DOJ has never done before. In its letter to Congress, the DOJ forcefully argued that civil cases should be left to the people who own the copyrights; it said it did not want its staffers to become "pro bono lawyers" for industry.

But the bill still has its opponents.

Well, there are public interest groups who feel this is a complete waste of time, energy and taxpayer dollars. Gigi Sohn of Public Knowledge thinks that the entertainment industry should be spending its time and money trying to come up with a different business model, instead of suing people who share files without permission on the Internet.

But it didn't surprise Sohn that the bill sailed through Congress. According to the Center for Public Integrity, the entertainment industry is the 11th largest campaign contributor in the U.S; last year, it threw some $20 million into lobbying Congress. Sohn says that's how legislators managed to pass the pro-IP bill when they couldn't agree on a bailout package.

"During an election year," Sohn says, "they can twist enough arms of a Congress that is considering critical legislation to repair the financial institutions of this country, and still get a bill that satisfies their pecuniary interests."

It's also notable that one of the few opponents in Congress was Lofgren, who represents Silicon Valley.

Well, even though there's a lot of software and intellectual property coming out of the Valley, there's also a sense that the bill is part of a larger entertainment-industry agenda aimed at squelching technological innovation. For many years, the film and music industries have tried to get — and at times have succeeded in getting — laws passed that put limits on technologies the industry fears will let consumers make free copies of their intellectual property. The most recent example of this is a lawsuit against RealNetworks; it's keeping the company from releasing software that allows users to make copies of DVDs to put on laptop hard drives. RealNetworks' idea was that people might like to watch films they own on the go, without carrying around a bundle of DVDs.

I often say there's a civil war in California between the North, where the technology developers live, and the South, where the content providers live.

Why did President Bush sign the bill even though his own DOJ objected to it?

Well, he probably did the math. The bill had enough support in Congress to override a veto.