Accessibility links
Mixers Help Marriage-Minded Muslims Find A Match Here's something you don't see every day: unmarried Muslim men and women mingling with one another. That's taboo in a lot of their cultures. At a recent Muslim singles event in Virginia, attendees are not interested in dating. They want to find a spouse. 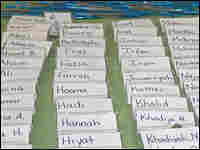 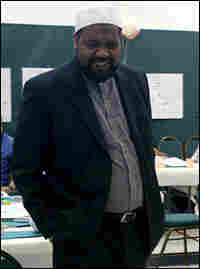 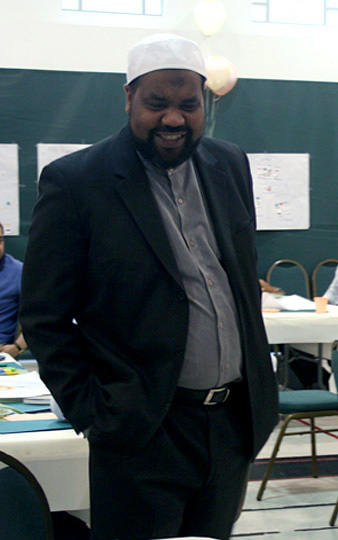 Imam Mohamed Magid says that interference from parents — especially marriages arranged back in the old country — is a bad idea.

Here's something you don't see every day: Muslim men and women, all unmarried, mingling with one another. That's taboo in a lot of their cultures. What's more, the singles attending this Muslim mixer in Sterling, Va., on a recent Saturday morning are not here for idle chitchat.

"I'm definitely not interested in dating. That's not the reason I'm doing this," says Saliha, a 25-year old nursing student. "The purpose is for marriage."

Like everyone interviewed here, she asked only to be identified by her first name. All the mixing is awkward for Muslim singles like Saliha who want to get married.

"I just want to meet other people here and get more into the marriage scene. Truthfully, I never talked to guys that much growing up, so I'm trying to increase my confidence," she says.

Standing nearby is Tarek. He's 34, good looking and a doctor — the sort of guy every mother wants to introduce to her daughter. He was born and raised in the U.S., and can't see himself marrying anyone who wasn't.

He says it's important to find "someone who understands the [music] that you do, someone who can get the same kind of inside jokes."

There aren't that many places single Muslims can search for a partner. They go to religious forums, which they know are places with great marriage potential. They also hit Muslim dating Internet sites. But most prefer face-to-face interaction like what's offered here at the ADAMS Center — a Muslim society in a Washington, D.C., suburb. The mixer is called a "companionship" event.

The biggest attraction about this day's event: no parents allowed. That's something Sahar, a striking 24-year-old electrical engineer, is grateful for.

Mohamed Magid, imam of the ADAMS Center, talks to the participants about culture, education and religion, and how expectations might clash with reality.

It's an important part of the day's discussions: Many of these singles live at home and have never had to confront issues that are part of adult life. The imam calls on them to consider whether they would accept someone from a different cultural background or less education.

The imam has been around long enough and seen many families argue over matchmaking. He thinks young Muslims should talk to their families before they get married. But he thinks interference from parents — especially going so far as to arrange marriages back in the old country — is a bad idea.

"They go and get this young lady, which is very much closer to the culture of the parents of the spouse than the spouse themselves," he says.

It often leads to divorce, he says.

A similar culture clash is taking place at the mixer. During a break in activities, a bunch of the younger women gather outside to vent.

"It's a great event, except it's full of FOBs — fresh off the boat," says one.

The women complain about a couple of older men who've tried to chat them up, or some who just don't get American culture.

By the end of the day, some declared success, and some didn't.

Sahar says she is cutting her losses.

But Tarek, the doctor, says he was happy with the day.

"Overall, the session was good," he says. "If you're asking me specifically if I found someone that I'd be interested in, yeah."

And with that, he was off to get a phone number — and hopefully, a wife.