Accessibility links
Matched By Mom: Arranged Marriage In America Sana and Shad Imam, a young Muslim-American couple, let their parents choose their partner. Shad says he thinks people just looking for love are missing out. Compatibility is much more important. The rest is just hard work. 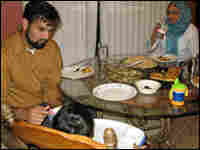 Shad Imam with his wife, Sana, and their daughter, Hadia, in their Virginia home. Jamie Tarabay/NPR hide caption 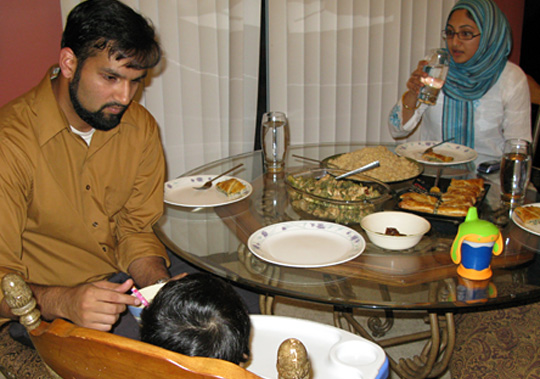 Shad Imam with his wife, Sana, and their daughter, Hadia, in their Virginia home.

How do you marry someone you haven't lived with? It's a question Shad Imam has heard over and over again, most recently from a woman sitting next to him on a plane.

He knows it sounds weird, but after nearly six years of marriage, what he has works. And he can't imagine being with anyone other than the woman his mother picked out for him.

"It depends on your expectations," Imam says. "My expectation was that I would love my wife regardless of who she was."

He admits it's an idealistic way of looking at things, but a traditional marriage where the parents agree before the children do is something that he says has worked for hundreds of years in his culture, and it worked for him, too. His parents were always going to be involved, he says.

"In our culture, if you don't want the parents involved, that's a disaster waiting to happen at some point," he says.

And, according to his wife, Sana, it's their parents' duty to arrange marriages.

To see this husband and wife move about their Virginia home in total sync, finish each other's sentences, tend to their 2-year-old daughter, you'd never think they hadn't lived together before they were married.

In the beginning, though, it was a different story.

She says there were — and still are — moments when she said to herself that she barely knew her spouse.

"I think he still has moments like that" as well, she says.

When their parents looked to bring them together, they considered several issues. The couple calls them "big-ticket items." They included religiousness, respect and education.

The parents dug around for information. Shad calls it the "auntie network."

"In our culture, almost across the board you'll see it's the mothers who are networking queens. They've got their hands everywhere — they know which girl's done what, who's ready to get married — and it's second nature for them that they're thinking about it."

Theirs was a match with an American twist: They met each other first to see if they liked each other. Shad says parents are starting to realize traditional marriages don't work here as well as they would in, say, India or Pakistan.

"They're hearing a lot of cases of our generation getting divorced and having a hard time getting remarried," he says. "I feel like there's a trend amongst parents now to allow for an opportunity and not to force as much."

They had their own cultural barriers to contend with, too. She was born in Pakistan and raised abroad. He was born and grew up in the U.S.

Sana says she doesn't fully understand American culture. After some prodding by her husband, she admits that she thinks Shad was too friendly with women.

"He was a lot more friendly with the ladies than I would have been," Sana says. "He's a very good guy — very respectable — but he just had a lot of lady friends."

But are they in love?

"When we first got married, I don't think we were," Sana says.

"Where we are now, we'd never go back," Shad adds.

They say they have something much deeper than love. Shad says he's watched a lot of his American friends as they searched for "The One," whereas his philosophy was to work with his parents' choice to make Sana "The One."

He thinks people just looking for love are missing out. Compatibility, he thinks, is much more important. The rest is just hard work.