Accessibility links
Drug Ads Play Up Benefits, Downsize Risks That beautiful mesmerizing moth fluttering through the Lunesta sleeping pill commercial? Studies show that such animated, sparkly creatures do a good job of helping you tune out the narrated list of side effects. 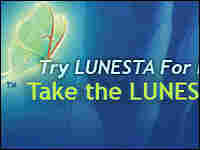 A screenshot from Lunesta.com. hide caption

Lisa Schwartz, a Dartmouth medical professor, says the main problem with most drug ads is that they exaggerate the benefits of a medicine while minimizing the side effects.

Read her deconstruction of a Lunesta sleeping pill commercial, comparing the ad's claims with a 2003 research study conducted on the drug, which was approved by the FDA in 2005.

Taking medicine used to be only for the sick. But in the age of direct-to-consumer advertising, drugmakers have persuaded a lot of people that taking medicine can be a casual affair, something healthy people should do to stay well.

With more than $4 billion a year spent on pharmaceutical ads, studies show it's increasingly common for people to ask their doctors for drugs they've heard about on TV.

TV ads for the sleeping pill Lunesta air during many popular network shows. One ad begins with a pitch-black screen.

"This is you," a narrator's voice says. "You've awakened in the dark because your sleep aid didn't give you a full night's sleep."

On screen, viewers see a woman with lying in her bed. She's tossing and turning, clearly frustrated.

But during the 60-second advertisement, her sleep problems are put to rest.

"Tomorrow, ask your doctor about Lunesta," says the narrator as gentle music plays and a glowing moth appears.

The woman appears to fall into a deep sleep.

She looks so restful, says former TV producer Al Tompkins. "And when she wakes up, she's just gorgeous," Tompkins says. "She sits right up and stretches and looks great. Who doesn't want that?"

Tompkins, now a consultant with the Poynter Institute, says TV ads like these are persuasive because they sell you a feeling. "I believe you remember what you feel, longer than what you know," he says. "And this spot is long on feeling and clearly the things you could know — the facts, the numbers — are things you'll never remember."

A litany of warnings and side effects is spoken clearly during the Lunesta ad.

The narrator's voice tells viewers, "Until you know how you'll react to Lunesta, you should not drive or operate machinery. Do not take Lunesta with alcohol. Most sleep medicines include some risk of dependency. Side effects may include unpleasant taste, headaches, drowsiness or dizziness."

Reading these warnings, it's easier to remember the details. But when people watch the ad, they're much more likely to be distracted by the moving pictures and music. The images of the gliding luna moth almost feel like an IMAX movie.

"When the eye and the ear compete," says Tompkins, "the eye wins."

There are many other reasons people may not recall the side effects or warnings mentioned in television ads.

"There's so much information going on in one minute," says Duke University's Ruth Day. A cognitive scientist by training, Day studies how well people remember and comprehend drug advertisements.

When side effects are chunked together in the middle of an ad, Day says people have a very hard time recalling them.

"If you present a list of items, people are going to do well in the beginning and the end," Day says. "But they'll have trouble with the middle and a little past the middle."

Applying this principle to the Lunesta ad, it's possible that viewers remember the first couple of warnings, about not driving or drinking alcohol, but by the time the "risk of dependency" is mentioned, attention is divided.

Speed is also an issue. Side effects are usually spoken more quickly than the rest of the ad.

"Having a three-grade level difference between understanding some of the information, vs. other information," says Day, "is very striking."

A little more than a decade ago, most medicines went by technical-gobbledy-gook-names that patients didn't pay much attention to. That was the job of doctors.

But, then the FDA warmed to the idea that TV commercials about drugs could help educate consumers. In theory, ads inform people about medical conditions and treatments they don't know about. But there's a hitch.

"I think what consumers really need to understand," says Dominick Frosch of UCLA, "is that they're getting a one-sided message."

A message that prompts more of us to ask for drugs we don't really need.

One bit of evidence that this happens comes from a study that used paid actors to portray patients with a wide range of emotional problems. When the actors went to doctors and asked for one drug by name, Paxil, doctors often obliged.

"There was a dramatic effect of patient requests on prescribing rates," says Richard Kravitz of the University of California, Davis, who led the research.

In many cases, the actor patients were describing symptoms that warranted the drug they asked for. But not always.

The downside is certainly that patients who may not have required an anti-depressant prescription got one as a result of these requests, says Kravitz. "Therefore, we might conclude that doctors are more malleable than we might hope."

Over-prescribing can lead to serious problems. In one recent case, the over-prescribing of a certain class of anemia drugs led to some deaths. The drugs are intended for certain cancer patients undergoing chemotherapy, but a TV commercial made it seem other patients may benefit, too.

Watch with a Skeptical Eye

"I think in general it's very important to approach these drugs skeptically," says Lisa Schwartz, professor of medicine at Dartmouth. The problem with most drug ads, according to Schwartz, is that they lead people to believe that the benefits are certain.

Take for instance, that Lunesta sleeping pill. According to the ad:

Schwartz was curious about this statement, so she analyzed the largest research study behind the claim. What she found was that "most people were not getting seven to eight hours of sleep at all."

In turns out, the volunteers in the study who took Lunesta slept on average 6 hours and 22 minutes per night. This compares with those who took a placebo, or sugar pill. They slept an average of 5 hours and 45 minutes.

"So it was just 40 minutes more of sleep," says Schwartz.

Sepracor, the company that makes Lunesta, says the seven- to eight-hour claim is actually based on a different study, in which people taking the drug spent three nights in a laboratory where they were closely monitored and were not disturbed for at least eight hours.

On those nights, 68 percent of the people who took Lunesta slept an average of seven hours or more. Of those who got the placebo, 37 percent slept that long.

Some people may be glad for even an extra 40 minutes of sleep, and for them, Lunesta may make sense.

But Schwartz worries that the commercial leads viewers to think the drug's effect is much more dramatic. This may help explain how Lunesta generated a $500 million in sales last year.

"It's one of the largest growing categories in advertising spending, and their sales reflect that as well," he says.

The ad campaigns use the same tactics that Madison Avenue perfected decades ago to sell dish soap or stain removers.

They're produced in such a way to create an ideal sense of life, says McKinnon, "where everyone is happy, and every problem you have can be solved with a quick fix." 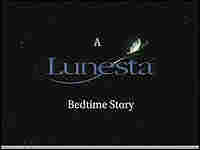 A screenshot of a Lunesta TV ad. Found through Clipland.com hide caption

Lisa Schwartz, a Dartmouth medical professor, says the main problem with most drug ads is that they exaggerate the benefits of a medicine while minimizing the side effects.

Here, she deconstructs a Lunesta sleeping pill commercial, comparing the ad's narrated and written claims with a 2003 research study conducted on the drug, which was approved by the FDA in 2005.

AD CLAIM: Millions of Americans who once had trouble turning off their restless minds are catching a great night's sleep with Lunesta.

Ads tend to broaden the definition of disease, Schwartz says. They can make healthy viewers wonder if they have a disease, and thus need a drug to cure it. But in clinical trials to test if a drug is effective, "the medical problems are defined by much more stringent terms," she says. In a large 2003 study, Lunesta was tested for effectiveness in adults who clinically had insomnia. That is, they reported sleeping on average less than six and half hours per night and/or took more than 30 minutes to fall asleep over a one-month period.

By offering Lunesta as a solution for "restless minds" at night, however, the ad encourages people to seek a medical explanation and solution for a problem that isn't necessarily medical. "The first, most important treatments (for sleeplessness) are things like increasing exercise, avoiding caffeine, avoiding daytime naps and ... technically, it isn't insomnia until you've had it for 30 days."

AD CLAIM: Lunesta helps most people sleep all through the night. A full night = 8 hours.

Sepracor, the maker of Lunesta, says it bases its ad claims on a 2004 sleep-lab study, led by Dr. Gary Zammit of Columbia University and sponsored by Sepracor. Sepracor also paid for a larger 2003 study, led by Dr. Andrew Krystal of Duke. Both studies were considered by the FDA in its decision to approve Lunesta in 2005.

In the smaller 2004 study, 308 patients were given Lunesta or a placebo for 44 days, three nights of which they were monitored in a sleep lab. Sixty-eight percent of Lunesta patients slept on average for seven hours or more, vs. 37 percent of the placebo group. Sepracor says such a sleep-lab study is a much more controlled way to measure sleep.

But Schwartz says the 2003 study, in which 788 patients took either Lunesta or a sugar pill every night for six months, is bigger. In it, Lunesta patients only slept 37 minutes longer – an average of six hours and 22 minutes – than those taking a sugar pill, who on average slept five hours and 45 minutes.

AD CLAIM: And works quickly, so take it right before bed.

AD CLAIM: Lunesta is... approved for long-term use.

Patients may have a different idea of what "long-term use" means. Clinical trials on many sleep medicines, including Lunesta, have only lasted for six months, Schwartz says. "I don't think when people hear long-term use, they're thinking that it was studied for only six months," she says.

AD CLAIM: Most sleep medicines carry some risk of dependency. Side effects may include unpleasant taste, headache, drowsiness and dizziness.