Accessibility links
The Best Foreign Books You've Never Heard Of Only about 3 percent of all books published in the United States are works that have been translated. Even for a Nobel Prize winner, it's not easy to keep a book deal with a major American publisher. In an attempt to reverse the trend, David Kipen of the NEA offers a list of his favorite foreign authors. 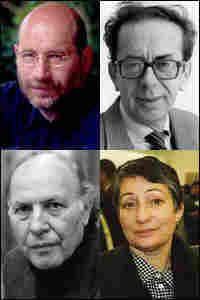 No matter how acclaimed a writer may be abroad, publishing for translated authors in the U.S. comes with challenges. Above, some of the best international authors of the moment, according to David Kipen (clockwise from top left): Boris Akunin, Ismail Kadare, Ludmila Ulitskaya and Imre Kertesz. Courtesy of Publishers hide caption

French writer Jean-Marie Gustave Le Clezio won the Nobel Prize for literature Thursday. If most Americans have never heard of this accomplished author of more than 30 novels, essays and story collections, perhaps it's because there is so little emphasis on international books in the U.S. publishing world.

Only about 3 percent of all books published in the United States are works that have been translated, laments David Kipen, director of Literature and National Reading Initiatives at the National Endowment for the Arts. In terms of literary fiction, the number falls below 1 percent, according to the blog, Three Percent.

Fed up with these sorts of figures, Horace Engdahl, permanent secretary of the Nobel Committee for Literature, charged last month that Americans are "too isolated, too insular" and that the American publishing world is excessively closed off to translations.

In an effort to reverse the trend, Kipen offers a list of his favorite foreign authors — whom most Americans have never heard of.

You may have to brow-beat your local bookstore to find them. You could also try a little searching online.

You can add your own suggestions to this list on our blog.

The audio version of this story as well as the earlier Web version included a false statement by David Kipen that Imre Kertesz lost his book deal with a major American publisher because sales didn't meet expectations. In fact, the novelist chose to change publishing houses.