Accessibility links
At 85, 'Atomic Ed' Is Still Ticking Off Los Alamos For more than 25 years, Ed Grothus has been a thorn in the side of the Department of Energy's Los Alamos National Laboratory, hoarding its debris and criticizing its work. While some may have hoped he would slow down in his old age, he remains as feisty a rabble-rouser as ever.

Listen
At 85, 'Atomic Ed' Is Still Ticking Off Los Alamos 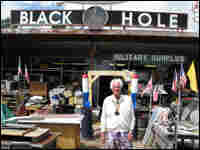 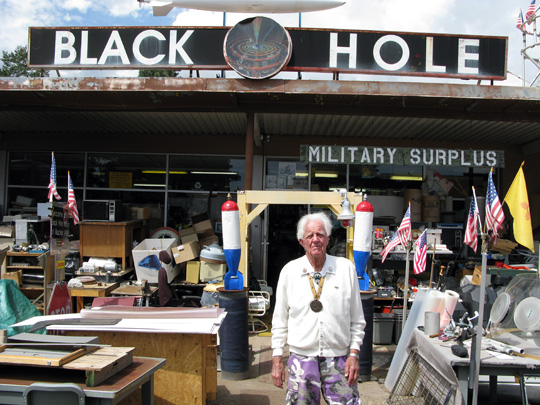 "Atomic Ed" at the Black Hole, his government surplus store and museum on a 5-acre compound in Los Alamos, N.M. 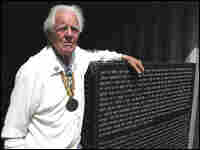 Ed Grothus, seen here with one of his "Doomsday Stones" — on which will sit a 32-foot granite obelisk inscribed with a screed against nuclear bombs, translated into 15 languages. John Burnett/NPR hide caption 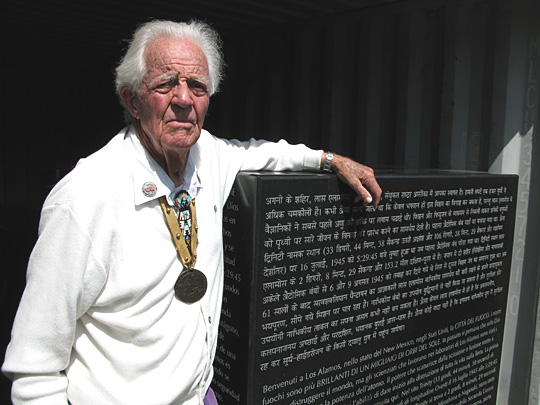 Ed Grothus, seen here with one of his "Doomsday Stones" — on which will sit a 32-foot granite obelisk inscribed with a screed against nuclear bombs, translated into 15 languages.

The most visited attraction in Los Alamos is the Bradbury Science Museum, where visitors find replicas of the two most famous bombs in history, Little Boy and Fat Man — dropped on Hiroshima and Nagasaki, respectively.

The next most visited attraction is the Black Hole, a government surplus store and museum whose inventory comes from the nation's foremost nuclear weapons lab — the Department of Energy's Los Alamos National Laboratory. Compared to the Bradbury Science Museum, the Black Hole's proprietor offers a very different presentation.

Grothus is hard to miss: 85 years old, with a cloud of white hair, wearing purple camouflage pants and a peace button on his sweater. He quit the lab in 1969 over his opposition to the Vietnam War; he sold Indian curios with his wife, Margaret, for a few years, before opening the Black Hole in 1980.

"I refer to everything as nuclear waste," says the town's most famous peacenik. "It's waste from the nuclear business. But I only sell about 1 percent of what I buy. And so there's been a huge accumulation of stuff."

"Atomic Ed," as Grothus has come to be known, is a compulsive buyer at the lab's monthly auctions of surplus government property. As a former machinist, he says he can't stand to see precision equipment thrown away, which means he has everything — from oscilloscopes and galvanometers to Geiger counters and centrifuges — stacked in canyons in the Black Hole.

The sheer quantity of stuff on his cluttered, five-acre compound is overwhelming. Most of it was used for bomb-making, though you won't find radioactive material or classified computers. The hardware for sale is more mundane.

When asked who comes in to buy a butterfly valve, Grothus says, "It's very seldom."

Grothus named his store the Black Hole because, by his own admission, "everything goes in, and nothing comes out." Business is a trickle — mainly tourists, artists seeking found objects, movie set decorators and the occasional craftsman.

Atomic Ed is best known around town not as a junkman, but a rabble-rouser. Every August, in remembrance of the atomic bombs dropped on Japan, he joins out-of-town peaceniks and unfurls a large banner that says, "WE APOLOGIZE FOR THE NUCLEAR BOMB." His letters about nuclear disarmament appear in the local newspaper every few weeks.

"One bomb is too many, no matter who has it," he says. "They have to think a different way. I don't know whether humanity can get out of this nuclear trap."

The backdrop to these sentiments is a town where the national lab supports 90 percent of the local economy, a town where locals cruise along Oppenheimer Drive and get their glasses at Atomic Eye Care. Which is why, for many people here, Atomic Ed is, as former Republican state Sen. Steve Stoddard puts it, "pretty much written off as a crank."

"Oh, there's Grothus again with his one of his dang letters, or, jeez, Ed's down there with his signs," says Stoddard, who regularly shows up with fellow World War II veterans to counter-protest whatever Grothus is saying. "But you can't fault [Ed's] courage in the sense that he knows he's making people angry, and he's in a town that certainly doesn't share his feelings."

When asked for a reaction to Grothus' protests, a spokesman for Los Alamos National Laboratory answered with a resounding "no comment." The lab finds Grothus' antics tiresome, such as the time during the Wen Ho Lee spy scandal when Grothus sold lab surplus computer discs with "Top Secret" stickers on them. The FBI confiscated the computer discs, but later returned them.

Atomic Ed also offends Catholics when he dresses up in cardinals' garb and offers to celebrate critical mass at his First Church of High Technology.

But even when Grothus invites descriptions of a buffoon or a crackpot, there is something fundamentally necessary about what he does, says Kyle Wheeler, a former county counselor and a retired technical writer at the lab.

"He keeps writing these letters to the editor, and keeps bringing up issues that maybe a lot of people don't want to think about," she says. "So I sort of think of him as the conscience of the community."

Atomic Ed probably won't be around much longer. He has cancer, which has lent a certain urgency to his crusade.

As perhaps his final creative protest, Grothus has produced two 32-foot tall granite obelisks, which he happily shows visitors. They sit inside a shipping container, the stone inscribed with a screed Grothus composed against nuclear bombs, translated into 15 languages.

Grothus tried to give the ungainly monuments to Los Alamos County, but the Art in Public Places Board politely and emphatically turned him down. Los Alamos, which is trying to soften its history, prefers the motto currently seen at the town's entrance: "Where Discoveries Are Made." The lab would rather talk about its research into fuel cells, or its training of United Nations inspectors to enforce the Nuclear Nonproliferation Treaty.

So the "Doomsday Stones" gather dust, as do the centrifuges and Geiger counters. But the Black Hole's fame seems to be spreading. A Polish tourist stops by to take a picture of Atomic Ed in front of the store.