Accessibility links
Richardson: N. Korea Will Allow U.N. Inspections North Korea has agreed to allow U.N. nuclear inspectors to verify that the country is shutting down a nuclear reactor, according to New Mexico Gov. Bill Richardson, who led an American delegation on a White House-approved four-day trip to North Korea this week. 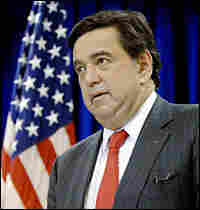 North Korea has agreed to allow U.N. nuclear inspectors to verify that the country is shutting down and sealing its primary nuclear reactor, says New Mexico Gov. Bill Richardson, who led an American delegation on a White House-approved, four-day trip to North Korea this week.

The deal came after the United States freed up millions of dollars in North Korean assets that had been held months in a Macau bank.

Richardson, a former U.S. ambassador to the United Nations and Democratic presidential hopeful for 2008, returned from the trip with the remains of six U.S. soldiers killed in the Korean War.

A troubleshooter in the region many times, Richardson talks to Michele Norris about the best way to barter with the often-prickly government, and prospects for resolving international tension over North Korea's nuclear ambitions.

As someone who has dealt quite a bit with the country, what is the best way to prod and push this government? What do they respond best to?

What they respond to is dealing with them directly, and I believe the Bush administration has been doing that. But for some time, they were not dealing with them directly, and I felt that that was the wrong way to go. They were doing it through the six-party talks; they were using the Chinese, outsourcing our diplomacy. But recently, with Secretary [of State Condoleezza] Rice and [Assistant Secretary of State] Christopher Hill, they talked to North Korea directly, and that yielded results that I support, that the international community support, that, in essence, starts a process of dismantling North Korea's nuclear weapons.

So we were able to advance the process to the point where the North Koreans gave me a commitment that a few days after the funds are unfrozen, they're going to shut down the reactor and invite the international inspectors. So that's where we are now, but I believe the administration has moved in the right direction by having direct talks rather than doing it through the Chinese.

Now, the deadline for the exchange is this weekend; you've said it would take an extraordinary effort to actually meet that deadline. Why is it so hard to do that, to meet that deadline? And what happens if they don't?

Well, to put it mildly, the North Koreans are very difficult. They're very — they're unpredictable; they like gamesmanship; they like to be in the news; they like to basically leave everybody twittering while they play their little games. But in the end, I do believe they are committed at least to Phase 1 and Phase 2 of the six-party agreement, which is to start a denuclearization of their weapons. So that is good.

They always play to the brink. Probably they won't make the deadline, but a few days after, I believe, they will meet their obligations, but it'll be belated and they'll take their time and they'll frustrate everybody as they always do.

Now, the U.S. seems to be at a constant standoff with North Korea. Many people listening to this will wonder why should anyone take North Korea at their word?

Well, because you can't. First of all, they're very difficult; they break agreements. But what's the alternative? This is a nation with possibly six nuclear weapons, very unstable, over a million men in arms. We have 37,000 Americans armed forces on the DMZ on the South Korean side. We have an agreement with South Korea to protect them and to work with each other. They shoot missiles.

So what you want is stabilization of the Korean peninsula. You don't want North Korea with nuclear weapons. But we still have to prod them to get this agreement done and to start dismantling their nuclear weapons, and in exchange, North Korea starts getting from Asian countries food, energy assistance. It's the poorest nation on earth, so they need to get some of that assistance to get out of their very dire economic straits.

Does the U.S. at this point approach North Korea from a weakened state since that country knows full well that this country's military is stretched rather thin?

Well, they know that we still have huge resources, and they are always complaining about U.S. military exercises. Interestingly, North Korea sees themselves eventually as an ally of the United States; in other words, as an ally against China. They see themselves as playing a strategic role as a buffer between the United States and China. I'm not sure how realistic that is, but it's interesting that they see themselves, first, as a major power, and secondly, as having the same interests in Asia as the United States and other countries — which is basically to contain China a bit.

So with that framework, there are a lot of ways you can negotiate and improve the relationship. But they have to change their attitude towards the world; they've got to come out of isolation; they've got to reform their human rights; they've got to democratize; they've got to, also most importantly as I've said, get rid of their nuclear weapons because they're very dangerous.